The Mummy speaks: Scientists hear sounds from the voice of an ancient Egyptian priest

In life, Nesyamun was an Egyptian priest who sang and chanted words of worship at the Karnak temple in Thebes. In death, he was ritually mummified and sealed in a coffin with the inscription "Nesyamun, true of voice." Now, some 3000 years into the afterlife, with the aid of a 3D-printed vocal track, Nesyamun can once again be heard. 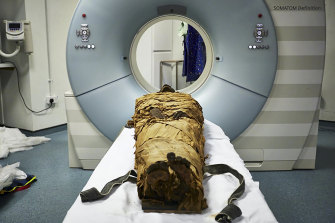 The mummy of Nesyamun, a priest who lived in Thebes about 3000 years ago, ready for CT scanning. Scientists used a 3D printer, a loudspeaker and computer software to recreate a part of his voice.Credit:NYT

"He had this wish that his voice would somehow continue into perpetuity," said David Howard, a speech scientist at Royal Holloway, University of London.

Howard and his team used a CT scanner to create a 3D-printed version of Nesyamun's mouth and throat. They combined it with an electronic larynx to reconstruct "the sound that would come out of his vocal tract if he was in his coffin and his larynx came to life again," Howard said.

So far the team has synthesized only a single sound from the mummy, which resembles the "ah" and "eh" vowel sounds heard in the words "bad" and "bed." But the finding, published Thursday in Scientific Reports, may lay the groundwork for re-creating and listening to an ancient person's voice.

In September 2016, staff at the Leeds City Museum in England, where Nesyamun has resided for the last 200 years, wheeled the mummy to a nearby hospital to be CT scanned. The scan showed that much of his throat had remained intact.

"The actual mummification process was key here," said Joann Fletcher, an Egyptologist at the University of York in England and an author on the paper. "The superb quality of preservation achieved by the ancient embalmers meant that Nesyamun's vocal tract is still in excellent shape."

Using the CT scan, the team 3D-printed a copy of Nesyamun's vocal tract between the larynx and lips. Howard then took a loudspeaker, similar to one used on an ice cream truck, removed the horn portion and replaced it with the 3D-printed vocal tract. He also connected the loudspeaker to a computer that enabled him to create an electronic waveform similar to what is used in common speech synthesisers. This acted as an artificial larynx. Using the computer software, he could generate a sound that would go through the loudspeaker and into the 3D-printed vocal tract, creating the mummy's vowel sound.

"He certainly can't speak at the moment," Howard said. "But I think it's perfectly plausible to suggest that one day it will be possible to produce words that are as close as we can make them to what he would have sounded like."

Howard said that in the future the team could modify the computer software to approximate elements such as the size and movement of the tongue and the position of the jaw.

"You can take that to its natural conclusion," said Katherine Baxter, curator of archaeology at the Leeds museum and a co-author on the paper. "Could we make Nesyamun actually speak his original words as written on his coffin?" 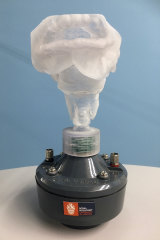 The 3D-printed trachea and mouth of Nesyamun.Credit:NYT

Roselyn Campbell, a bioarchaeologist at the Getty Research Institute who was not involved in the study, called the paper "fascinating" and said the authors were clearly aware of the limitations in their study and of the complexities of re-creating the past.

"I think their emphasis on returning Nesyamun's voice, and thus some of his identity, is a vital acknowledgment of the ethical considerations not only in studying the past, but of clarifying the relevance of such research to the modern public," Campbell said.

Piero Cosi, a speech scientist at the Institute of Cognitive Sciences and Technologies in Italy, who was a part of a team that reconstructed the voice of Ötzi the Iceman in 2016, said the work was interesting but speculative.

"Even if we have the precise 3D-geometric description of the voice system of the mummy, we would not be able to rebuild precisely his original voice," he said.

Kara Cooney, an Egyptologist at UCLA, said the work might have potential but was concerned with how it might be used in the future.

"When you're taking a human being and using so much inference about what they looked or sounded like, it can be done with an agenda that you might not even be aware of," she said.