The Pope declares Christmas should not be about swapping presents

The Pope declares Christmas should not be about swapping presents and ‘bright lights’, but welcoming ‘the surprises of Heaven on earth’

Pope Francis said Wednesday that Christmas cannot just be about swapping presents and indulging in a massive consumer binge, urging the faithful to remember its original purpose to mark Christ’s birth.

‘The advertising machine tells us we have to exchange more and more new presents to give us a surprise. But is that the sort of celebration that God wants?’ Francis asked a regular open audience in the Vatican.

‘No, Christmas is about listening to the silent voice of God,’ he said. 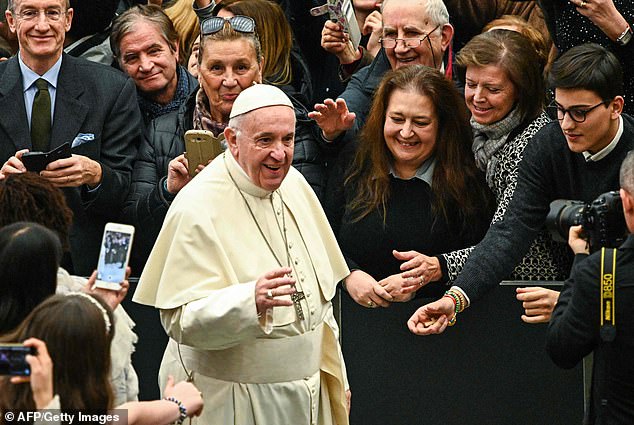 Pope Francis warned against the commercialization of Christmas. Pictured upon his arrival to the weekly general audience in Paul VI hall on Wednesday

‘Please, I ask you, let us not turn Christmas into a fashionable event!

‘It is not Christmas if we seek out the bright lights, if we load up on presents but then don’t help even one poor person,’ said the Pope who is well known for his criticism of social inequality and injustices.

He added: ‘To welcome the Savior there are no powerful people, no ambassadors, just simple shepherds, surprised by the angels while working at night.

‘But it is on the night of Christmas that the biggest surprise comes: The Most High is a small child. To celebrate Christmas, then, is to welcome the surprises of Heaven on earth.’

His latest address comes just a day after he warned politicians of the dangers of exploiting nationalism and fear of foreigners to undermine the trust essential to their task of binding societies together, not dividing them.

Trust based on an ‘authentic political life, grounded in law and in frank and fair relations between individuals… is never easy to achieve,’ the pope said in a message released Tuesday which will be used to mark World Peace Day on January 1.

This is because ‘human relations are complex, especially in our own times, marked by a climate of mistrust rooted in the fear of others or of strangers, or anxiety about one’s personal security,’ he said. 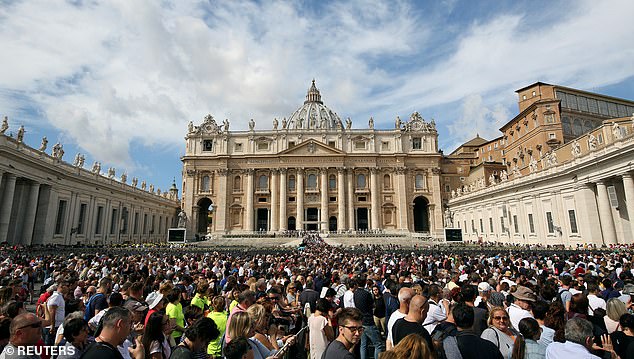 ‘Sadly, it is also seen at the political level, in attitudes of rejection or forms of nationalism that call into question the fraternity of which our globalised world has such great need.

‘Today more than ever, our societies need ‘artisans of peace’.

‘Political addresses that tend to blame every evil on migrants and to deprive the poor of hope are unacceptable,’ he added in the message entitled: ‘Good politics at the service of peace.’

Pope Francis also warned against corruption and the pursuit of personal ambition at the expense of wider society, saying that when rulers look out only for themselves, the future is compromised, especially for the younger generations which become marginalised.