The ‘social bubble’ bursts again! Brits hit beauty spots and high streets and traffic surges to 75% of pre-lockdown levels as temperatures soar to 70F on second day families are allowed to meet again after restrictions were lifted

Britons hit beauty spots and high streets as temperatures soared to 70F on the second day families were allowed to meet again after coronavirus restrictions were eased.

TomTom data showed roads around Liverpool were 75 per cent of pre-lockdown levels at 1pm today as Britons took to parks amid warm summer temperatures this afternoon.

In London, traffic surged to 50 per cent of figures recorded a year earlier – as congestion in Brighton rose by two per cent compared to last Saturday.

The latest transport data came as dozens of Britons flocked to Winchester High Street in anticipation of shops reopening for business tomorrow after weeks of closure amid the coronavirus pandemic.

Social distancing banners reading ‘Please keep your distance’ and marking out two metres were seen above the high street in preparation of the UK’s shops coming back to life from tomorrow, with non-essential retailers allowed to open their doors for the first time since March.

Other Britons today took the opportunity to travel to some of Britain’s beauty spots, including Battersea Park in London, to enjoy the warmer weather as the mercury rose to 73F (23C) in the capital.

These people are taking advantage of Boris Johnson’s new ‘support bubbles’ rules, which allows people from two households to interact with each other at less than two metres apart.

With ‘support bubbles’ in force, people itching to socialise after being confined to their homes since the ‘stay at home’ order was given on March 23 rushed outdoors on Sunday. 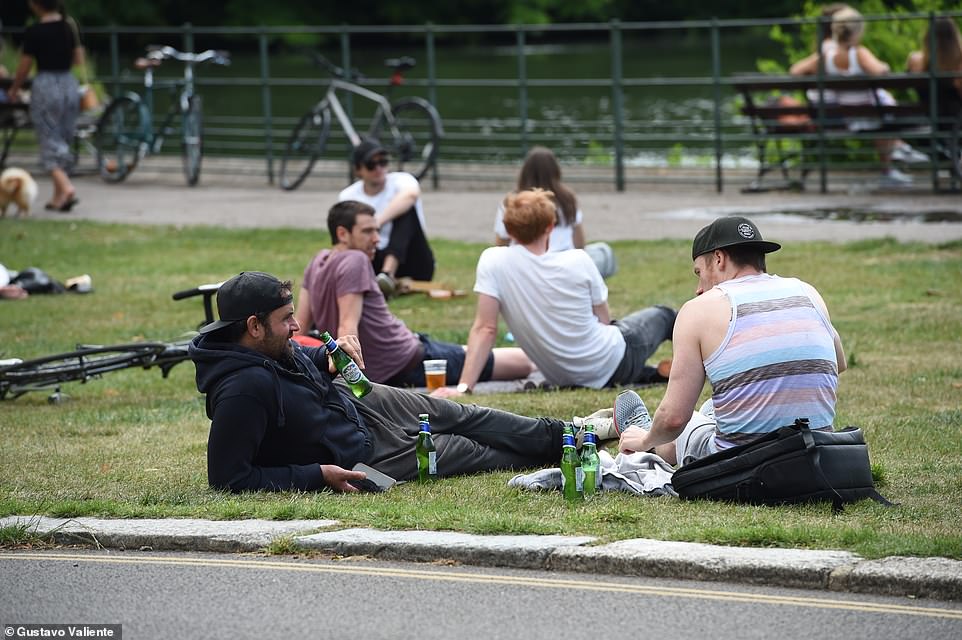 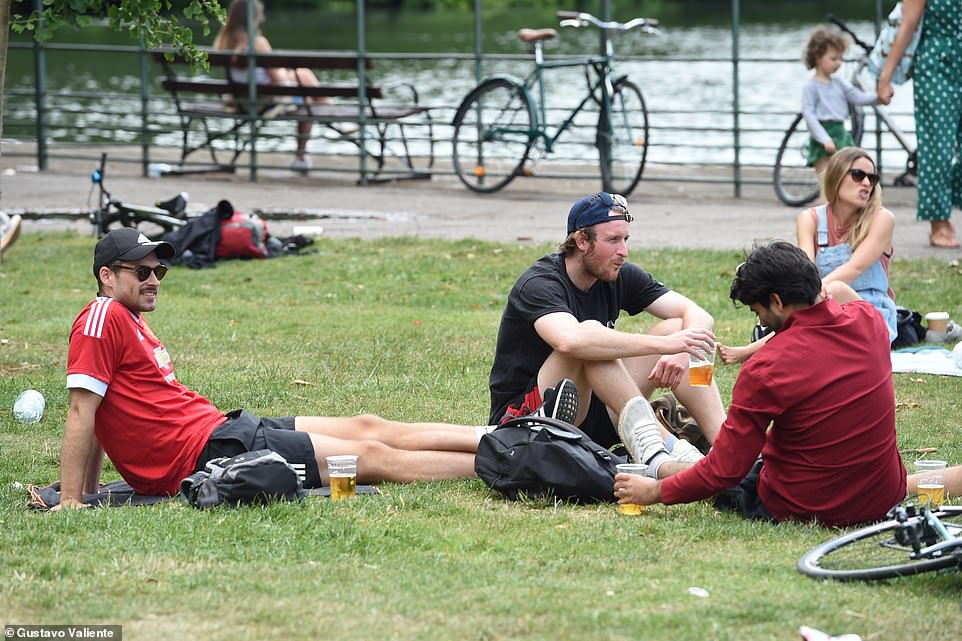 Temperatures are expected to remain high today, encouraging Britons to take to parks and meet up with friends after lockdown restrictions were eased 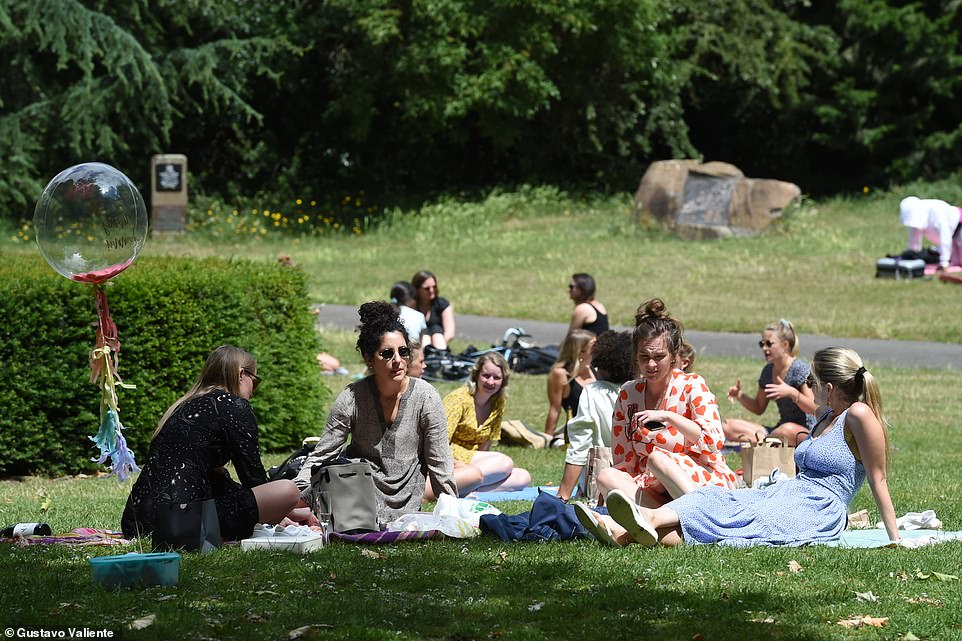 Londoners photographed enjoying the sunshine at Battersea Park this morning, with warm weather increasing the number of people out and about

During the spells of sunshine today, the mercury could rise to as high as 79F (26C) in London, and just below in many other areas including Birmingham, Manchester and York.

Temperatures are not expected to reach the 70s in Scotland, where it is likely to remain wet for most of the day.

The rain is then expected to return later today, with fog also likely in some areas, particularly in the north-east, with sunny spells again coming in between scattered showers.

Despite the showers, though, some areas experienced temperatures of up to 75F (24C).

‘The picture is not really changing into early next week as the unsettled weather continues,’ Met Office spokesperson Nicola Maxey told MailOnline. ‘We’re likely to see a mix of sunshine and strong showers, with a risk of thunderstorms for the first half of next week.’

England in particular has been beset by rainfall in recent days, with more than double the amount of water falling in the first 10 days of this month, compared to all of May.

Last month was the warmest May on record with global temperatures 1.13F (0.63C) above average, according to the European Union’s climate change monitor. 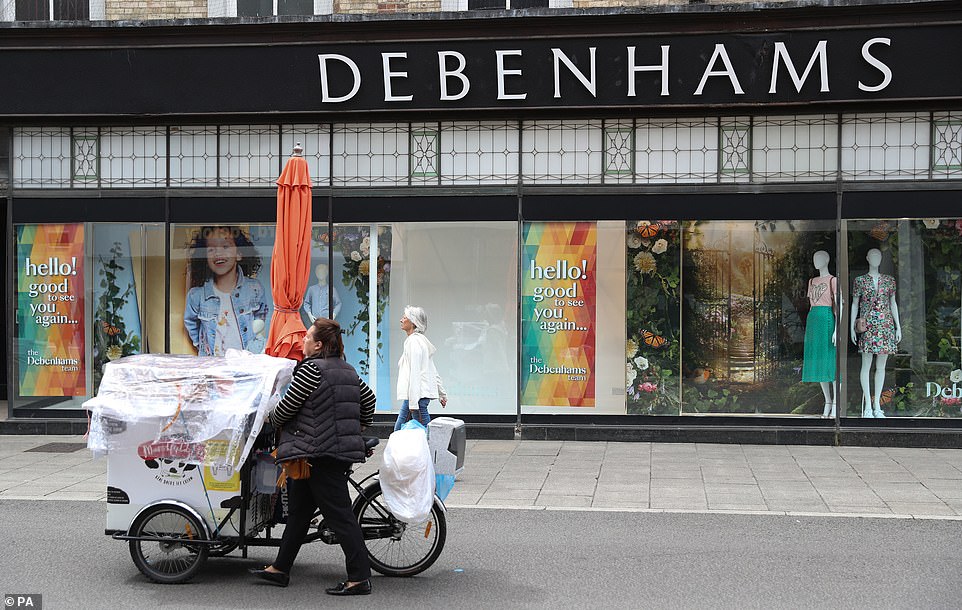 People walk past Debenhams department store on the high street in Winchester, ahead of the re-opening of non-essential retailers in England on June 15 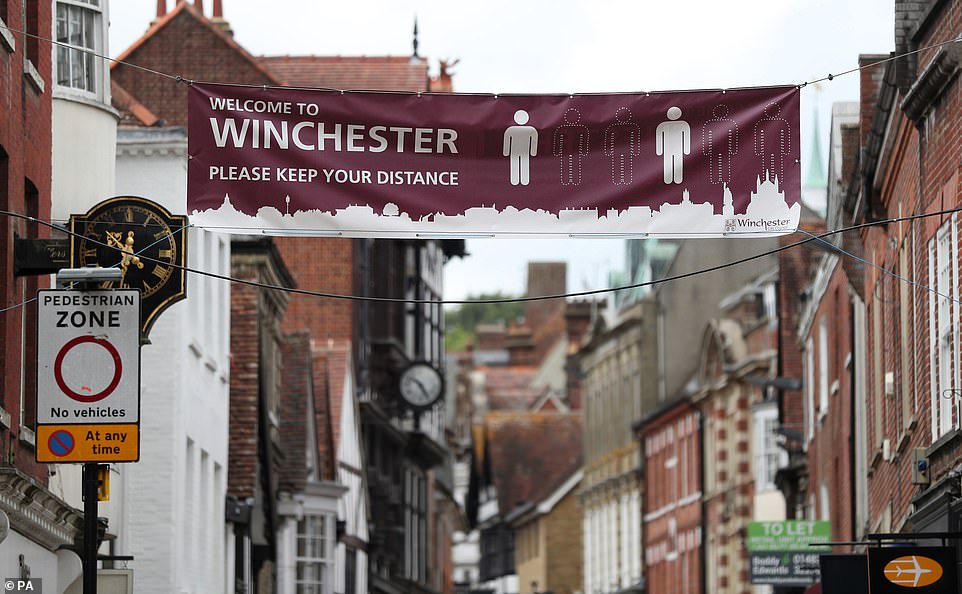 A social distancing sign the high street in Winchester, ahead of the re-opening of non-essential retailers in England on June 15 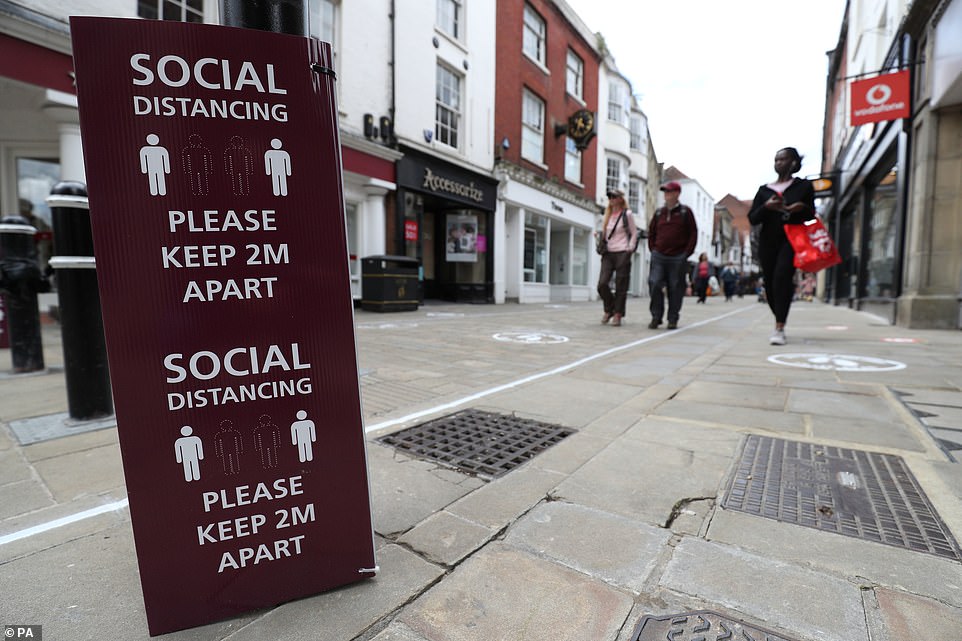 It comes Rishi Sunak today revealed ministers are ‘urgently’ looking at whether the two metre social distancing rules can be relaxed to boost shops and allow more pubs and restaurants to reopen.

In a clear sign he would like the rule eased, the Chancellor admitted he could see the ‘positive impact’ of reducing it to 1.5metres or one metre, citing other nations which have already made such a change.

He told Sky’s Ridge on Sunday: ‘It’s the difference between three quarters and maybe a third of pubs opening. So it is importantly that we look at it.

‘Now that we have made good progress in suppressing the virus we are at a different stage in the epidemic than we were at the beginning. That enables us to take a fresh look at this.

‘Obviously many other countries around the world use a different rule and indeed we have seen a couple of countries recently – I think Norway and Denmark – have moved from two metres to something less as well.

‘But is it important we look at it comprehensively in the round and that is what we will do urgently.’

He added: ‘I can very much understand the positive impact it will have on businesses’ ability to open and thereby maintain the jobs that they have and make sure the people who work for them can come back to those jobs and remain employed. At the same time we must make sure it is safe to do so.’

Mr Sunak had earlier appealed to British shoppers to get out there and spend some money appealing to them to ‘get out there, get shopping’ amid the worst economic decline in generations, with GDP plummeting by a quarter in just two months.