‘The status quo doesn’t work’: Horse-drawn carriages back in the spotlight

A renewed push to resolve long-running tensions over Melbourne’s horse-drawn carriages will come to a head on Tuesday, amid allegations carriage drivers are performing illegal road manoeuvres and putting the public and horses at risk. 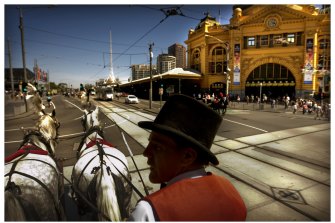 Animal activists have upped their campaign to have the city’s historic carriages banned since one of two horses pulling a carriage in Arden Street, North Melbourne, died last month.

In 2017, then lord mayor Robert Doyle tried to remove horse-drawn carriages from the CBD, saying horses were incompatible with a bustling city used by 1 million visitors and workers a day.

The have been near misses between trams, cars, cyclists and horses on Swanston Street, sometimes referred to as “the world’s busiest tram route”. 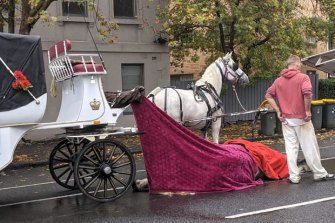 The campaign to remove horse-drawn carriages from the city was renewed after this horse dropped dead in North Melbourne last month.Credit:Melbourne Against Horse-Drawn Carriages

While the council removed street trading permits for horse-drawn carriages in 2017, it has no power to ban them from the streets, as carriages are regarded as legal vehicles under road safety regulations.

Cr Leppert said operators were still able to take online bookings, but many were flouting the local law preventing them from accepting street trade by passing pedestrians.

“Many continue to conduct street trading, contrary to the local law, but enforcing this is exceptionally difficult given the inability of local law officers to apprehend the driver of a moving vehicle,” he said. 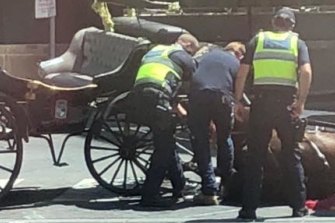 A photo taken by activists of a horse that fell near Crown Casino in February, 2018. Credit:Melbourne Against Horse-Drawn Carriages

“Swanston Street is the busiest tram route in the world, with more truck movements than ever from Metro Tunnel works, and too many horse-drawn vehicle operators continue to perform illegal road movements.

“The situation is simply unsafe to members of the public, to vulnerable road users and to the horses themselves … the status quo does not work, and the risks of government inaction are too high.”

Unique Carriage Hire owner Dean Crichton, who is not accused of breaking the law or road rules, said the council had made assumptions about the way he operated his business and had refused to consult him in the past.

“We are not standing on the street touting for carriage rides. The majority of my work is all done over the internet,” Mr Crichton said.

He said occasionally tourists paid cash in hand, usually after they were referred to him by hotels, but he did not see accepting the business as breaking a local law.

“I am quite happy to be paid cash for my carriage rides, but it is not street trading,” Mr Crichton said.

He said he wanted an opportunity to sit down with the council, but believed the motion was bowing to pressure from animal rights activists.

“By making it hard for my business, they make it hard to care for my animals,” Mr Crichton said. “I do what I love because I am an animal lover not an animal hater.”

Activists have lobbied Melbourne City Council to step up its efforts to remove horse-drawn carriages, including by working with VicRoads.

One woman, Elizabeth Viggars, told council on Tuesday she had had frequent near misses with carriages.

“I regularly cycle to work through the city and have had many encounters with horse-drawn carriages taking over bicycle lanes,” she said.

“I feel vulnerable when pushed into traffic in order to bypass the horses. It is particularly dangerous at night, when we are less visible to drivers. Recently on my way home from work I was forced into general traffic, due to a horse-drawn carriage fully occupying the bicycle lane, also a no-standing zone.”

“The only way to get through this is to ban them completely,” he said.

Mr Crichton said the number of carriages he operated in Melbourne had gone from four to two, due to the loss of trade during the pandemic, but believed the carriages were well-loved.

“I don’t think there is a tourist that comes to Melbourne on a holiday for a week and doesn’t have a photo taken in front of our carriages.”