The time-poor, compromise-driven marriage of Bill and Melinda Gates

There are friends whose weddings you go to, whose vows you echo and whose joy you toast – all while wondering how long it will last. Then there are couples like Bill and Melinda Gates, who appear for all the world too sensible and too devoted to give in to hot-headed disputes which can end a long term marriage.

Perhaps that’s why news of their split is so gloomy. If anyone was going to make a lifetime’s go of it, surely it was them? For run-of-the-mill celebrities, relationship drama is practically in the job description. For other tech billionaires, you can see it coming. Jeff Bezos bulking up in the gym was a giant warning light, and thrice-divorced father of seven Elon Musk doesn’t appear to be a model of marital harmony. 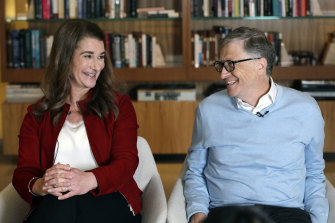 But steady-as-you-go, 27-years-together, life of dedication to good causes, chinos-wearing Bill and Melinda? Surely not them. If their marriage is, as they claim in court documents, “irretrievably broken”, then it feels like we’re all doomed. It was, after all, only two years ago, on the silver wedding anniversary, that Bill posted a video of him cutting their wedding cake and Melinda gushingly responded: “I thought my heart was full that night, but the last 25 years have taught me just how full a heart can get.”

So what on earth could have gone wrong?

While the news of the Gates’ separation may have seemed a bolt from the blue, there are hints that something has clearly been rumbling. “It’s been a challenging stretch of time for our whole family,” wrote their eldest daughter Jennifer, 25, though she confessed her feelings were still raw. “I’m still learning how to best support my own process and emotions as well as my family members at this time.”

One of the most significant “family members” in this story, however, is missing. Bill’s father, Bill Senior, a lawyer and himself a philanthropist, was a man whose values were pivotal not just in his son’s life but in bringing and keeping his son and daughter-in-law together. Indeed, in the Gates dynasty, the tech billionaire son always referred to his father as “the real Bill Gates – all the things the other one aspires to be”. It was, then, inevitably devastating when in September last year Bill Gates Snr died from Alzheimers aged 94. Not easily given to emotion, Bill Jnr posted a tender and intimate portrait of his father online: “Dad lived a long and enormously meaningful life. I never stopped learning from his wisdom, kindness, and humility.” Above all, he wrote, “Melinda and I owe him a special debt.” 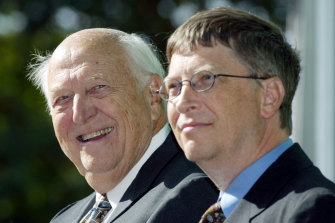 “Without me, you wouldn’t even be here”, Bill Gates snr once told his billionaire son. Credit:AP

The Gates family that young Microsoft product manager Melinda French was attracted to after she started dating Bill in 1987 was a Gates family shot through with the personality of her future father-in-law. “He was the bridge between them, the glue,” said one observer who knows Bill. “This wouldn’t have happened before he died.”

In so many ways this is a split beyond the comprehension of ordinary mortals. How could it be otherwise, when the principals are between them worth more than $US 130 billion ($168 billion). But some of the stresses and strains in their marriage are, despite all that, deeply familiar, and rooted in the simple business of bringing up the children. In her book, The Moment of Lift: How Empowering Women Changes the World, Melinda writes of growing frustrated by always being the one to clean up after dinner. A fiercely independent woman who gave up her career to raise their family, she found herself carrying the burden of domestic duties. Only in 2001, a year after he stepped down as Microsoft CEO, did her husband start doing the odd school run.

Raising Jennifer and her younger brother Rory, 21, and sister Phoebe, has been a project which sometimes divides, but more often than not, unites. “Over the last 27 years,” the pair wrote in their joint announcement, “we have raised three incredible children and built a foundation that works all over the world.” It’s clear they view their children and the Bill and Melinda Gates Foundation as the twin pillars, the two great achievements, of their married life.

But Phoebe, pictured above with her father in 2018, is now 18. How many couples stay together, tough it out in the hard times, for the children? And there have been hard times. “I can remember some days that were so incredibly hard in our marriage where you thought, Can I do this?” Melinda said in 2019.

The bottom line and the other ‘woman’

Whatever their disagreements, Bill and Melinda Gates have always been united on one thing – the desire to give their money away. Cash is unlikely to be behind this split. Indeed, on a trip to Africa while they were engaged, a few years after Bill, at 31, had become the world’s youngest billionaire, they jointly decided that, as Melinda put it, “the vast majority of resources from Microsoft [which Gates co-founded] would go back to society”.

There was never any dispute. It was, Melinda said, “an easy discussion” and, while their lifestyle is hardly spartan (they live in a vast mansion called Xanadu 2.0 overlooking Lake Washington, just outside Seattle), they are determined to give away their wealth – the children will reportedly get $US10 million ($13 million) each, a fraction of a fraction of a per cent of the family fortune. While their personal lives are going in separate directions, the pair have also made it clear that they will continue to run the Foundation together.

Nor is there any suggestion that anyone else is involved. Bezos, of course, famously left his wife Mackenzie for the broadcaster Lauren Sanchez. Melinda was even apparently happy to let Bill head off each year to spend a weekend with his ex-girlfriend, software entrepreneur Ann Winblad, at her beach house in North Carolina. Yet it was innocent, even geeky fun. “We play putt-putt while discussing biotechnology,” Gates once said. Winblad, who is five years older than Gates, was the “one before the one”. They split in 1987, the year he met Melinda, and remained on good terms: he even called her and asked her to sanction his marriage.

Winblad did so because she thought Melinda had the brains not to bore or be bored by Bill. “Intellectual stamina,” she called it.

Indeed, if there was “another woman” in Bill Gates’ life, it was always his career – first his fierce focus on establishing Microsoft and crushing the competition, and secondly his intense desire to address global ills through the Foundation. In the early days of dating, this little “something on the side” was understood. “She had other boyfriends,” Gates said in the documentary Inside Bill’s Brain, “and I had Microsoft.”

Not always so cuddly

One doesn’t necessarily become a tech titan by being easy going. It’s hard to remember, now that he is the epitome of an avuncular philanthropist, that Bill Gates was once deeply feared, unforgiving and ruthlessly competitive, so desperate to establish his company as the peerless global leader that Microsoft was eventually taken to court by the US government on monopoly charges.

He was, and clearly remained, deeply uncompromising on aspects of his life that were of supreme importance to him. His wife would tell the story of how, when in 2013 she wanted to co-write the forward to their Foundation’s annual report, he refused. “It got hot,” Melinda wrote in The Moment of Lift. “Bill said the process had been working well and he didn’t see why it should change.” Eventually, after several years of compromise, the couple did co-sign the letter. But as Melinda has said : “He’s had to learn how to be an equal, and I’ve had to learn how to step up and be an equal.”

Too much time in lockdown – and not enough

It may have been the pandemic that broke their marriage. As with all families, it transformed the Gates’ life. Global travel, the backbone of their often separate working lives, was curtailed. Bill and Melinda, like husbands and wives around the world, found themselves marooned with one another.

And as they faced each other at home, the issue that had run like a thread through their marriage will have become inescapable: time. Could Bill – a man some say divides his day into five-minute segments the better not to waste a second – devote time enough to his family?

It was a question that had dogged the couple from the beginning. A couple of weeks after they first met, sitting next to each other at a business dinner (“I could sense he was interested”) they bumped into each other in the company car park and, according to her “he struck up a conversation and asked me out for two weeks from Friday”. A fortnight’s wait – how romantic. Melinda gave him her number and demanded more spontaneity. A couple of hours later he rang to ask her out the very same evening with the line: “Is this spontaneous enough for you?”

Bill was tormented – not because he didn’t love Melinda, but because he was unsure he could commit enough time to his family: “When he was having trouble making the decision about getting married, he was incredibly clear that it was not about me, it was about ‘Can I get the balance right between work and family life?’”

So, like the methodical man he remains, Gates famously drew a line down a whiteboard, dividing it into two halves: the pros and cons of getting married. Melinda walked in to find him, in his bedroom, totting up the list. 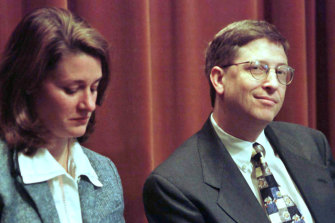 Melinda and Bill Gates announce the launch of their jaunt foundation in 1998, then worth $Us17.1 billion. Credit:Reuters

In the end, of course, the couple went for it. But the tension of time, for a man on a mission to make very most of and do the very best with his power and fortune in the rest of his life, has never gone away.

They have done the things that over-stretched couples do – scheduling fun, rather than having it spontaneously as Melinda initially demanded. “We’ve learnt how to communicate well with one another,” she said. “Sometimes you’ve just got to go out and play: doing something fun together; going out to a movie together; going on a date night.”

“We are very purposeful about it,” she noted. “We lead incredibly busy lives with work and three children so we literally put date nights on our calendar to make sure we do things together.”

Even when she realised she was pregnant she “considered not telling Bill” because the couple were about to go away together on a rare holiday. “The trip was a huge deal for us. Bill rarely took time off from Microsoft… and I didn’t want to mess up the trip.”

Two years ago, asked the secret of their quarter-century marriage, she answered unambiguously: “I have learnt it takes time.”

Could Melinda compete with COVID? No one but the two of them will truly know, but it is interesting to remember the story that goes with that famous picture of him cutting their wedding cake. While she throws back her head and laughs, a portrait of unbridled joy, her “heart full” as she later said, her husband’s mind turned out to be elsewhere, plotting and totting as always. While she was focussed on their life together, he was calculating, doing “some astonishingly quick math,” as she later recounted, to cut the cake so that all their guests received an equitable slice.