Acting Premier Jacinta Allan was harbouring a secret as she fronted the media on the morning of December 31.

Earlier that day she’d received advice from the state’s public health team that recommended closing the border between Victoria and NSW.

The advice, signed off by acting Chief Health Officer professor Allen Cheng, was going to be unpopular. 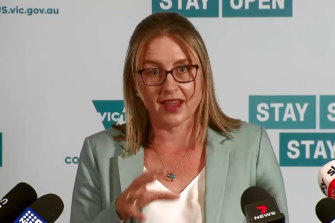 But it was crystal clear. In the absence of widespread coronavirus restrictions in NSW, a border closure was the only option.

It made two other recommendations which Ms Allan announced at her morning press conference: masks would have to be worn indoors again and home gatherings would be limited to 15 visitors.

But the more contentious and significant change—the closure of the NSW border during the busiest holiday period—would not be announced for another five hours.

It was a decision that would upend the summer breaks of 60,000 Victorians and lead to massive traffic jams as motorists frantically tried to cross the border before midnight on New Year’s Eve to avoid 14 days of home quarantine. Many fatigued Victorians visiting northern NSW had to drive non-stop for almost a day.

Around 4000 Victorians unable to cross the Murray River before the 11.59 pm cut-off on January 1 would find themselves trapped on the wrong side of the border, awaiting exemptions so they could return home to jobs, families and pets.

The decision to close the border was deemed to be one of great statewide significance so it had to be approved by a cabinet committee. 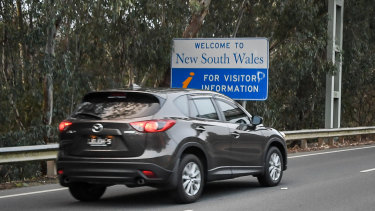 The NSW/Victoria border was closed from 11.59pm on January 1.Credit:Justin McManus

Premier Daniel Andrews, who was holidaying at home in Mulgrave but on work calls for 20 hours a day, was extensively briefed during the day.

He also approved the border closure which was announced by Ms Allan at a snap press conference at 3.30pm.

“This is not an easy choice,” Ms Allan said. “Closing borders and putting in place restrictions is never an easy choice to make, and certainly not one we wanted to make and be announcing on a day that is supposed to be about celebrating.”

There had been warnings. On December 18 Health Minister Martin Foley advised Victorians to avoid travel to Sydney due to a growing coronavirus cluster. Then on December 27, the state government advised Victorians against travelling to NSW. Unfortunately by this time, many people had already gone away.

Public health officials were on high alert after a NSW coronavirus outbreak that originated in Sydney’s northern beaches spread to the Blue Mountains and Wollongong.

On the day the border closure was announced, NSW had recorded 10 new coronavirus cases, and trouble was also brewing in Victoria. A NSW-linked outbreak at Thai restaurant in Black Rock had grown to eight cases.

Public Health Association of Australia chief executive Terry Slevin said while those inconvenienced by the border closure were always going to believe they hadn’t been given enough notice, authorities had to act quickly.

“You don’t go into public health to be popular,” he said. “The Victorian community is very determined to avoid a lockdown. People are prepared to see restrictions of freedom to achieve a longer term avoidance of a sudden return to lockdown.”

But Georgie Crozier, the opposition’s health spokeswoman, believes the decision to shut the border was “completely unreasonable and very dangerous.”

She said people had already started drinking on New Year’s Eve when the announcement was made, making their hurried journeys across the border risky.

She also hit out at COVID-19 response commander Jeroen Weimar for sharing an account of how he travelled from south-west Queensland to northern Victoria in less than 10 hours, with just two 15-minute breaks.

Amy Touzell, her husband and two children are stranded in the Gold Coast and trying to figure out how to return to Melbourne. While the orthopaedic surgeon can fortunately stay with friends for as long as she needs, she wants to return to Melbourne because her son will soon start prep and her patients need face-to-face care.

After a tough year working at a Melbourne hospital rocked by a coronavirus outbreak,the family decided to drive to Coffs Harbour on the north coast of NSW for a change in scenery.

When the announcement about the border closure was made Dr Touzell calculated she would have to complete a nine-hour drive in seven hours in order to avoid home quarantine.

“It was going to be really dangerous,” she said.

She’d also heard horror stories of six-hour queues on the border and wasn’t sure if driving to Victoria on New Year’s Day was going to be viable either. Instead, the family decided to travel north to Queensland.

She’s spent every day since on the phone to the Department of Health and Human Services and is still unsure how and when she’ll be able to return home. “The lack of communication is the hard part,” she said.

She'd like to see a national standard for border closures with clear procedures for interstate travellers. "It is so important that we work as a collaborative nation with clear messages about how we can all live safely in a pandemic," she said.

Dr Mukesh Haikerwal, chair of the Victorian council of the Australian Medical Association, said while he supported the border closure, the DHHS had provided confusing information to travellers.

He said officials were also unprepared for the surge in people at testing clinics, with thousands of returned travellers queuing for up to six hours in order to meet the conditions of their travel permit, which stated they must be swabbed within 24 hours of returning home.

He said there was no logical reason why returned travellers needed to be tested within 24 hours and as long as they were isolating, they should be allowed to get tested up to three days after their return.

“Sometimes that can be productive because you are not picking everything up on that first day,” he explained, referring to COVID-19’s incubation period.

University of Melbourne epidemiologist professor James McCaw is upbeat about the management of Victoria’s latest outbreak.

“The contact tracing has clearly been effective,” he said. “We have seen that through rapid turnaround of testing, and identification of the links between the cases,” he said.

He said the government and DHHS had significantly improved their messaging since Victoria’s second wave. One example of this, he said, was the detailed information released every day about exposure sites.

“The communication from the government has assisted Victorians to make good decisions and to know where there might be risks and act accordingly,” he said.

The author is currently undertaking 14 days of home quarantine after returning from regional NSW.