What kind of author wears out a pair of bush boots every year, curls up at night in dripping rainforests and often ventures so far off the track he carries a GPS and satellite phone just in case?

Anthony Car seems to break the mould in so many ways. He’s a merchant fraud analyst for a major Australian bank, the last decade of his life has been shaped by two artists, and he goes nowhere without his Nikon D810 and a bulging bag of lenses. 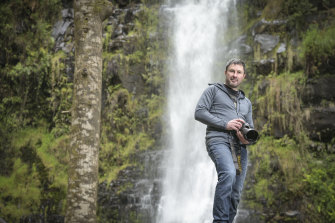 ‘It’s quite entertaining to my work colleagues’: Anthony Car at Erskine Falls, near Lorne.Credit:Reg Ryan

Car is a waterfall hunter. And he can remember a night when he nearly became their prey.

“Deep in the Otways around Cumberland River, I found one waterfall and thought I’d try for another before dark,” he says.

“It was winter, about 4.30pm, and darkness fell so suddenly. I had to pick myself along the rocky river. The globe blew on my wind-up torch and the only light I had was from my GPS.

“It was heavily overcast, no moonlight and light rain was falling. I fell into a gully and was up to my chest in water. I also broke the satellite phone.

“It was freezing. Treacherous. I found the road but I was 4½ kilometres from my car. It was midnight when I reached it.

“I don’t mind the bush but I prefer to be on a track when it gets dark. It’s not pleasant.”

Car, 51, from Briar Hill, has just self-published a massive 321-page book, Waterfalls of the Otway Ranges. It’s been an eight-year odyssey, making him the latest in a long procession of adventurers to scour the state in search of falling water.

“It’s quite entertaining to my work colleagues,” he says. “I come in some Mondays and they can’t work out why my face, neck and shoulders are cut and torn.

“It’s the bush. Impenetrable blackberry. I get jagged and torn by the thorns. My clothes get shredded. I’ve gone through eight pairs of boots.

“Sometimes a waterfall might be only 800 metres away but it will take me 2½ hours to reach it. The bush makes it a long journey. But I now know how to read the topography. I use my maps and follow the contours to ease the journey.”

He makes his comforts from small luxuries. “I’ve got a little gas cooker, I take my own food, a sleeping bag rated to minus 7 Celsius and a German Hilleberg two-man tent. It keeps the warmth in. And three pairs of clothes for each day in the bush.

“Some mornings when I wake, outside is covered in ice sheets. They snap and crack as I move around. You learn through experience.”

Anthony has been mesmerised by waterfalls since his teens, when he opened a copy of Waterfalls of Victoria by former naval commodore, maritime artist and poet Dacre Smyth. 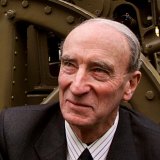 “Dacre’s paintings of waterfalls were something I wanted to see in person, to see if the actual waterfall matched my impressions. They always exceeded. I admired Dacre more for his feat in finding and painting those waterfalls. My real inspiration came from artist Eugene von Guerard, for his landscapes and waterfalls. He’s my favourite.

“When I rediscover these waterfalls, some of them unheard of for decades, I get the most glorious feeling. You feel so alive in that moment and appreciate all the effort you have put in to discover it.”

In her book Written in Stone, about the geology of the Great Ocean Road, Philomena Manifold explains the rocks of the Otway Ranges were formed by more than 120 million years of geological processes.

Sediments from a volcanic landscape were carried by an ancient river system into a rift valley that once separated Antarctica and Australia. Over millions of years, the sediments built up, eroded and were eventually pushed up into the topography we see today.

Water scours our rock as it follows faults and weaknesses, urged on by gravity. Across time, where water meets resistant rock, waterfalls gradually develop. The Otway Ranges are among the state’s wettest areas, with up to 900 millimetres of rainfall annually and 200 rain days a year.

Car says his most significant discoveries have been the single-tier Murray Falls in Beech Forest, the fine veil of water at Parkinson Falls, Beech Forest, and the Ethel May falls in a moss-cloaked fern gully near Apollo Bay.

So who goes hunting waterfalls? “It’s not a secret society!” Car says. “There’s a small but growing number attracted to it. I suppose there aren’t too many so dedicated that they’ll go to the limit I do and trek in and camp.

“My city job is computer-based. It’s good to get away at weekends. When I turned 18 and got my licence, I just had to get out and see all these waterfalls.” 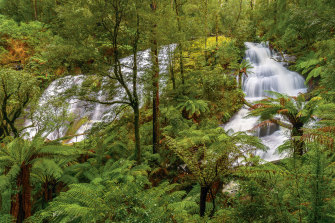 He’s certainly done that, trudging and bush-bashing hundreds of kilometres through sodden rainforests and rock gullies glazed in mist in pursuit of the icy cascades of the Shipwreck Coast in Victoria’s south-west.

There have been those who have gone before him. In the ’70s and ’80s, the late Shivanee Catherine Mansfield mapped 75 waterfalls in the rivers and streams of the Otways. More than 30 years later, Car has tripled that number to 226 personally identified and recorded.

He originally had three other partners. One by one they fell away. “I pressed on alone and that’s why it took me so long. It took me a whole year just to do the historical research.” He even taught himself to use design software to set the structure of his book.

Car’s quest has gone far beyond the bush. He has pored over the Register of Geographic Place Names and the records of local shires. 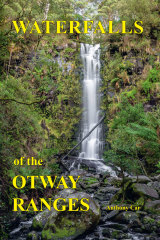 His extensive research revealed that not even half the waterfalls he visited had been recorded, registered or allocated names. For the majority, Anthony has provided suggested names based on historical associations or other appropriate information.

Each waterfall is colour-coded to designate those that are accessible, those not recommended without proper safety measures and bush experience and others off limits because they are on private property or are too dangerous to access.

Car provides GPS co-ordinates, topographical mapping, the number of tiers in each waterfall, tier heights, total height, the name of the water course and a first-hand description of each waterfall.

For each waterfall, Anthony takes you on his own journey in statistics, long-exposure photographs, a description of the falls and extracts from historical publications and newspapers.

At Kalimna Falls, west of Lorne, he observes: “The Lower Falls consists of an overshot cataract which allows you to view it from multiple locations where the water lands into a substantial pool … the ability to walk behind the water makes for a grand experience.”

Of the Wye River Falls: “The waterfall plunges steeply down hitting several thin ledges, with the water being mainly divided in two as it descends … contained in a deep gorge, the sun was just making its way up to offer a highlighted backdrop to this arresting waterfall.”

“There are magnificent waterfalls in the Otways,” Car says. “To rediscover them after they have become lost to the public is one of the best moments in my life. Maybe they haven’t been seen for decades. It stirs all my emotions.”

Waterfalls of the Otway Ranges by Anthony Car ($55) is available from book stores from Torquay to Apollo Bay and throughout the Otways. Contact Great Escape Books at Aireys Inlet on 5289 7052 or [email protected]