‘The winds of change are blowing in Asia’: Bangkok protests ramp up

The Thai government is bracing for more protests over the coming days and weeks, as demands for reform grow louder and activists insist they will not back down.

In an interview with The Sydney Morning Herald and The Age Parit Chiwarak, one of leading figures in the student-led protests, said he believed the "winds of change are blowing across the world, and I think they are blowing upon Thailand too", referring to a recent rise of long-running pro-democracy demonstrations against autocratic governments. 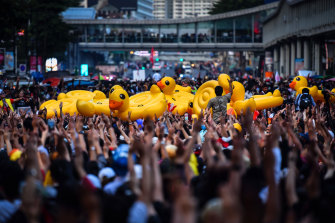 But despite the growing crowds and increasingly bold actions taken by the protesters, there are few signs their three key demands — reform of the monarchy, reform of the constitution and the resignation of military general-turned-Prime Minister Prayut Chan-o-cha — will be met.

Violent clashes outside Parliament on Tuesday, in which police used water cannons and tear gas on protesters, were followed by further demonstrations on Wednesday in which King Maha Vajiralongkorn was described as a giant monitor lizard. That's a calculated insult meaning bad person, and an extraordinary one in a country with some of the world's strictest laws against offending the monarchy.

The protests and the increasingly bold public criticism of the King and the government have grown in size and sophistication throughout 2020.

According to Parit, the pro-reform protesters, who have drawn extensively on the "be water" tactics used in Hong Kong to avoid police, have more planned. 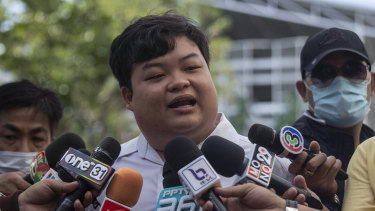 Activist Parit Chiwarak talks to reporters before one of his court appearances in Bangkok.Credit:AP

"I don’t think the protesters will be satisfied with removal of Prayut. We aren't afraid. We have to have a new constitution, we have to have reform of the monarchy," he said.

"Hong Kong has been one of our inspirations for our protests and we adopt some of their techniques in our movement. I think both us and those in Hong Kong are fighting for the same thing. We are both struggling to liberate ourselves from the authoritarian regimes and we stand with each other in a time of crisis."

Asked if he was concerned for his personal safety, given Parit, also known as 'Penguin', has emerged as one of the most-recognised faces of the relatively diffuse movement, the 22-year-old fourth-year university student was dismissive of the risks. He has already spent time in jail and is facing criminal charges for previous protests. 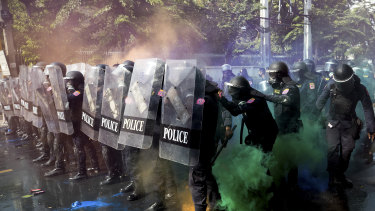 "For calling for monarchy reform I have been in prison and charged many times but I don't worry about my own freedom, it is the freedom of all this country. Living under this regime, this Prayut regime, it is already like being caged," he said.

"Yesterday the government has employed violence upon us, even though we protested peacefully. We were stopped by police with tear gas and rubber bullets, the police do nothing when the yellow shirts [pro-monarchist counter-protesters] throw rocks at us. This is what happens to us."

The protesters have used giant inflatable ducks as defence against water cannons, but they appear destined to becoming a mascot.

One protester told Reuters the ducks had originally been bought for fun, but were used as impromptu shields.

"If the police hadn't fired water cannon at us, we wouldn't have had to use them as a shield," said a protester who gave her name as Wim. 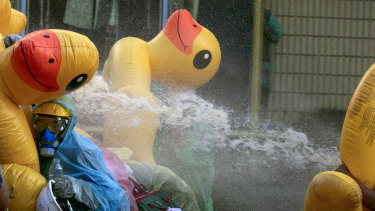 Pro-democracy protesters take cover with inflatable ducks as police fire water cannons during an anti-government rally near the Parliament in Bangkok.Credit:AP

A major demonstration is, at this stage, planned for November 25 outside the Crown Property Bureau, which manages the vast holdings of Thailand's Royal Palace. Personally controlled by the King, the holdings are estimated to be worth more than $40 billion.

But while the protesters have grown increasingly vocal in their demands for reform, the Thai Parliament has this week rejected a motion submitted by iLaw, the Internet Law Reform Dialogue, for all aspects of the country's constitution to be debated.

Two motions to set up a constitution drafting committee did pass. One, initiated by the governing coalition, called for the committee to be composed of a mix of appointed and elected members, while the other, backed by the parliamentary opposition, says all members should be elected. The other four motions, mostly dealing with details of proposed changes, failed.

The protest leaders have made clear they will not be satisfied unless the motion submitted by iLaw – which could pave the way for all three of their key demands to be met – is passed. Julia Roberts, 53, is still very much a Pretty Woman in Hawaii
We and our partners use cookies on this site to improve our service, perform analytics, personalize advertising, measure advertising performance, and remember website preferences.Ok