Just as a revolver without bullets is largely harmless, so a knife locked within its scabbard is hardly a weapon. This is even more so when the shielded blade is carried as a symbol of religious piety. But note here, a handgun with bullets can be deadly – as can a blade removed from its sheath.

Perhaps this is the point to dwell on when considering the controversy about whether or not Sikhs should continue to enjoy the benefits of an exemption that allows boys to discharge their religious duty to carry a kirpan – a ceremonial sword – when attending school. 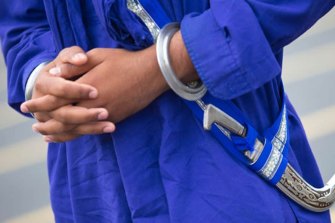 Baptised Sikhs are required to wear a ceremonial dagger, symbolising their duty to protect the innocent.Credit:Skielor

Until this week, they have been allowed to do so – without incident. All this changed when a boy was stabbed with a kirpan at Sydney’s Glenwood High almost two weeks ago. Naturally enough, many people have been stunned to learn that any kind of weapon is allowed to be taken into a school.

However, as the Sikh community has pointed out, almost anything can be turned into a weapon by someone wanting to cause harm. Regrettably, that argument sounds disturbingly similar to one advanced by the pro-gun lobby in the United States, which routinely claims – after each school massacre – that “guns don’t kill people, people do”.

What the apologists for unregulated firearms fail to acknowledge is that guns are designed to kill. It is not an accident of their design.

The same is not true of the kirpan which – in ceremonial form – can be rendered harmless. It should be possible to design a sheath from which the blade can never be drawn. The integrity of “form” would be preserved – a dagger with its blade intact. However, all but symbolic function would be denied. I suspect that if this was done, as in Britain, a reasonable compromise between religious freedom and public safety could be effected.

This would not prevent Sikh boys keeping other unmodified kirpans at home – or for carrying to the gurdwara, their place of worship. But on school days the harmless version of the kirpan would be the only one allowed.

This has been presented as a contest between religious freedom and public safety. As such, it provides a useful example of how general principle should be applied to particular cases.

Most of the recent debates have been about how to balance the right to religious freedom against the right, say, not to be subject to unjust discrimination. Such debates invite a certain measure of controversy – not least about where the boundaries should be drawn when the full application of these particular fundamental rights demand mutually exclusive outcomes.

Fortunately, the issue arising from the proposed ban of the kirpan is far more simple to resolve. This is because the focus of complaint has been that, in its current unmodified form, a kirpan is capable of gravely wounding – if not killing – a person who is stabbed. This basic fact overrides all other considerations. Human rights are worth nothing if you are dead. Thus, a person’s right to life is the bedrock on which all other rights rest.

So, the debate about whether or not kirpans should be brought to school takes place within the discourse of human rights. Rather than being an attack on human rights – it is an affirmation of their importance.

The opportunity to resolve this matter is obvious. All it requires is that the Sikh community provide their sons with perfectly harmless versions of the kirpan – that can be taken, without fear of harm, into any place where public safety is paramount. It’s been done elsewhere. It can be done here. Once the issue of the safety of students, staff and parents is resolved, then the balance may tilt in favour of religious freedom – which should be valued … but not at any cost.

Dr Simon Longstaff is the executive director of the Ethics Centre.