Think you could sentence a criminal? You be the judge

The Age was recently given the chance to participate in a mock court judgment and sentencing based on a real scenario. Below readers get the chance to have their say on the case and track if their opinion changes as they get more information.

Do you reckon crooks get it easy in the courts; that you could dole out sentences better than those bleeding-heart judges? Before you hit your “caps lock” button and reply, consider the crime, the victim, the offender, the need to protect the rest of the community.

Better yet, take the time to consider other factors a judge must weigh up before sentencing a stranger. 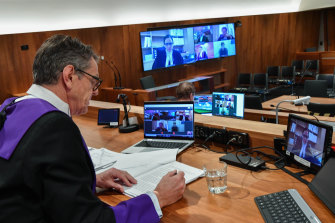 Victoria’s Sentencing Advisory Council runs monthly sessions where participants are given all the information about a criminal case and then get to pass judgment. The “You be the Judge” program has educated hundreds of people over various formats – currently online – every year since the 1990s about the intricacies of sentencing.

The Age took part in the program recently. There was no need for a law degree, no robes or leather-bound books. With a click of his fingers, the court’s education and engagement officer Chris Gill transformed The Age – and 11 other participants – into a judge, and assigned us the case of armed robber Michael.

“Michael” was a pseudonym, but the case was real. On New Year’s Eve 2017 he threatened a bottle shop manager with a 20-centimetre knife, saying: “Quick, I want money.” The manager didn’t resist and handed over $450.

In a poll at the start of the session, more than half of the participants declared Victoria’s judiciary too soft on criminals, while the remainder said judges got sentencing about right. Based on the information provided about Michael, the judges were polled on whether he should be jailed. Thirty-six per cent say yes, 36 per cent say no and the rest are unsure (the number of participants fluctuates during the session).

Throughout this article readers will have the opportunity to cast their vote on the correct outcome using polls like the one below. So what is your view at this early stage?

Few Victorians understand how many people are sentenced in the state each year. In the year ending June 2020, there were 88,506 people sentenced. The vast majority (93 per cent) had their fate decided by a magistrate. Five per cent were children and only 2 per cent went before a County or Supreme court judge.

That latter 2 per cent are most likely to have their cases reported in the media, and Mr Gill highlights that a judge’s sentence will rarely please everyone. Michael, he says, is likely to focus on how the sentence supports his rehabilitation and deters him from reoffending, his victim will give more attention to the punishment element and the media will prioritise community protection.

At 24, Michael is a drug user. He committed the hold-up four days after he left prison, and his guilty plea followed six past convictions for armed robbery, all which brought jail. He is homeless, has no family support and is intellectually impaired through a low IQ and possible brain injury.

What is your view now?

The judges have options: a straight jail term, a community correction order (CCO) or a combination sentence. Most CCOs involve drug and alcohol treatment or unpaid work.

Based on what we know, we’re again polled on whether Michael should get jail. By now the “no” camp has jumped to 55 per cent, and there’s just 27 per cent wanting to jail him.

The rest are unsure. What is your view?

The impact on a victim must also be considered. In Michael’s case, the manager was 62 years old, wasn’t physically injured and chose not to make a victim impact statement, though we can accept there would be some emotional toll. After calling the police, the victim resumed working.

The judges are polled again. Seventy per cent don’t want to jail Michael, and one is undecided.

Mr Gill gives the fence-sitter a gentle reminder that decision time is close. What do you think?

Michael couldn’t access his methadone program over the holiday period so needed money for heroin. His disadvantaged background and time in foster care, youth detention and adult prison mean he is institutionalised.

Now two thirds of the judges say he shouldn’t be jailed, one third says he should. What do you think?

Michael offended because prison provided stable accommodation and access to methadone. He is remorseful and hopes to learn a trade and get a job.

Polled again, 73 per cent of the judges don’t want him jailed and 27 per cent do. What do you think?

We don’t have to look Michael in the eye, but the mood is nervy when crunch time arrives. Although most of us think Michael shouldn’t be jailed, he must still be sentenced.

Mr Gill gives us five options, ranging from a CCO of up to two years and no jail, up to a prison term of more than five years.

On current sentencing practises, 81 per cent of convicted armed robbers are jailed. What do you think?

Six of the judges buck that trend and nominate a CCO of between two and five years. They don’t get to nominate the conditions, but drug treatment would be a given.

One participant wants Michael on a shorter CCO and four favour a combination sentence of jail plus a CCO. The responses show we all think Michael’s rehabilitation is important, as no one supports a straight jail term.

Spoiler alert: the best way to learn the real outcome is to take part yourself. The next session of “You be the Judge” is on January 31. If you really want to know now check out the graphics below.

But in Mr Gill’s final poll, 73 per cent of the faux judges say the real-life sentence Michael received was about right, and the remainder think it was too harsh.

That’s a decent contrast from our collective view an hour ago, that courts are too soft on criminals.

While victims of crime regularly feel their perpetrators are treated leniently, Victoria’s courts say research shows that people often support a judge’s sentence when informed of the law and the reasons.

Professor Arie Freiberg, the Sentencing Advisory Council chair, first devised “You be the Judge” for his university students to address misconceptions. He has now run sessions with everyone from judges to Rotary clubs. He often sees a softening in participants’ views as sessions progress, as more information makes decisions tougher.

“My criterium for success whether it be half an hour, two hours or six days with my students is that they come out saying, ‘It’s actually more complicated than I thought’,” he says.

Professor Freiberg believes the judiciary gets sentencing correct, based on the small number of cases that go before the Court of Appeal – about 1-2 per cent – and considers a judge’s role one of the most difficult.