‘This embarrassing show’: Israel forced back to polls for fourth time

The immediate cause was the failure of the Knesset, Israel's parliament, to pass an annual budget by a midnight deadline, one of many basic acts of lawmaking that have failed to pass since right-wing and centrist parties reached an unwieldy power-sharing agreement in the spring.

In the upcoming elections, automatically scheduled for March 23, Prime Minister Benjamin Netanyahu will face an usually strong right-wing challenge. Major defections from the dominant Likud party could imperil the record-long rule of Netanyahu, whose popularity has plummeted as the coronavirus has devastated the Israeli economy. 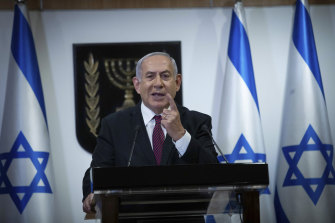 Announcing the failure to pass a budget, Israeli Prime Minister Benjamin Netanyahu said: “We did not want elections, but we will win” Credit:POOL EPA

The campaign will unfold as health officials race to vaccinate the population against the coronavirus, an effort unlikely to be completed by election day. That would mark the second time that Israelis, who last voted in March, will go to the polls amid an outbreak that has killed more than 3,000 people in the country.

The budget deadline passed after a Knesset vote to extend it by 10 days fell short by two votes, signalling a final collapse of efforts to broker a deal. With the Knesset officially dissolved, the nation has been plunged back into political crisis with little sign that an end to the long stalemate is in sight.

Several politicians surprised their party leaders and voted against the deadline extension, illustrating how factions have begun to splinter in recent weeks and making election outcomes difficult to predict.

In the run-up to the budget vote, Gideon Saar, a former Likud education minister, shocked his fellow party members by resigning from the Knesset and starting a new party to challenge Netanyahu's grip on the right wing of Israeli politics. Polls immediately showed Saar's fledgling "New Hope" draining a significant number of parliamentary seats from Likud, reflecting growing frustration with Netanyahu even among conservative voters. 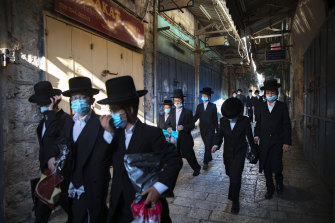 Netanyahu’s grip on conservative supporters has weakened as the coronavirus pandemic has taken its toll on Israel. Credit:AP

"That's the first time in the entire career of Netanyahu that there is a challenge from the right personally against Netanyahu, which may produce a coalition without the Likud," said Gayil Talshir, a political scientist at Hebrew University.

The shifting dynamics could also spell the end of the upstart Blue and White party led by former army chief of staff Benny Gantz.

A political newcomer who battled Netanyahu to a draw over the first three inconclusive elections, Gantz dismayed many voters and political partners by agreeing to join the coalition government with Netanyahu.

With neither side able to form a majority, and citing the rising pandemic emergency, Gantz agreed to serve as both defence minister and "alternate prime minister" under a rotation agreement that would allow Netanyahu to keep power until the political neophyte took over after 18 months.

The agreement allowed Israel to end more than a year of government limbo in which agency budgets were frozen and major initiatives were stymied even as the country faced increasing threats from Iran and mounting deaths from COVID-19.

But the compromise government – the largest in Israel's history – proved unwieldy and largely unworkable. To find jobs for coalition politicians, the bureaucracy swelled to 34 cabinet officers. Whole ministries were created, at a cost that infuriated Israelis who were watching their own incomes evaporate under coronavirus restrictions.

The forced partnership was tumultuous from the beginning, with the sides fighting over political appointments, finances and measures to stem the spread of the virus. Gantz accused Netanyahu of manipulating government functions, particularly judicial appointments and oversight, to protect himself from prosecution on multiple corruption charges being tried in a Jerusalem court.

Critics also said Netanyahu was maneuvering to deny Gantz his turn as prime minister, primarily by blocking passage of the 2020 budget as required by law, thereby triggering the early collapse of the government.

Gantz's public standing has withered significantly as the political infighting has continued. Although some supporters credit Gantz with putting the public good over his own ambitions in joining forces with Netanyahu, critics say the newcomer has been outwitted by the prime minister, a legendary political operator who has held onto power for 14 years, longer than any previous leader.

The bill to extend the deadline failed by two votes. Three Blue and White members and one from Likud defied the leaders to vote against it. Another Likud member didn't show up for the vote.

Likud lawmaker Michal Shir announced after voting against the measure that she was resigning her Knesset seat and signing on with Saar's new party, joining several other members who have embraced his effort to topple Netanyahu.

"I am at peace with my decision to do the least I can to end this embarrassing show of a stuck and conflicted government which is holding an entire country hostage," Shir said in a tweet.

Netanyahu could be in for a fight in March. While maintaining strong support amid his base of supporters, his legal problems and pandemic management have sparked weekly nationwide protests by critics of the "crime minister".

Further, the coming campaign will unfold just as Netanyahu's corruption trail kicks into higher gear, likely requiring him to appear in the defendant's dock several times a week.

Nor is there any guarantee that a forth election will finally end the country's dogged stalemate.

"Israel's ongoing political crisis will continue as long as Mr Netanyahu remains prime minister and a government cannot be formed without him," said Yohanan Plesner, president of the Israel Democracy Institute.