This group is trying to stop Trump’s reelection by asking people to pledge a few cents to Democratic groups every time the president tweets. It’s raised $2.7 million since June. 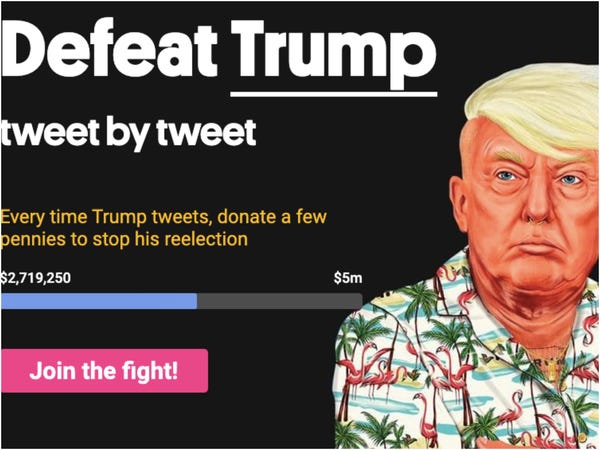 As the US presidential election looms, Democrats across the country are trying to find ways to vote out President Donald Trump.

One way, as Xander Schulz has found, is to raise money every time the president tweets — which is often. In June he founded Defeat by Tweet, a super PAC that asks people to pledge a few cents to Democratic groups every time Trump sends a tweet.

Schulz, who works in the family office of a former hedge fund manager, said he wanted to use the influence and privilege from his day job to raise money for minority-led C4s — organizations that promote social welfare — in swing states.

Defeat by Tweet encourages people to pledge a few cents per Trump tweet, and then tweet at the president every time he does to say how much it has raised.

"I think the one thing that people enjoy is that we're trolling the biggest troll on the planet," Schulz told Insider.

"People like that we're taking that power back from him. We send him a receipt saying: 'Thank you, Donald Trump, you just donated $1,500 to Black-led C4s in swing states. You've donated $1.2 million total — keep it up.'"

Schulz's fundraising model can be a lucrative one: Trump is a fervent tweeter. On June 5, he sent more than 200 tweets and retweets — breaking his personal single-day record.

Twitter is Trump's "bully pulpit," Schulz said, and using that against him can be empowering for critics who have never seen him taking accountability for saying derogatory things about women, making racist claims about the coronavirus, and "glorifying violence" against Black Lives Matter protesters.

"This man has never had any consequences for his actions in his entire life. He only gets elevated," Schulz said.

"He does things that we would all have our careers ruined by daily and he keeps climbing this ladder. So we're empowering people to add some sort of accountability and consequences for every time that he spews hate on these platforms."

Defeat by Tweet has the attention of activists, celebrities, and politicians

Some of the organizations receiving the funds include Color of Change, Black Voters Matter Fund, Electoral Justice Project, Black Church PAC, and many others.

Celebrities like Mark Ruffalo, John Legend, Sophia Bush, Noah Centineo, and Olivia Wilde have also pledged funds to the project and supported it on social media.

Schulz said Defeat by Tweet's main goal is not only to prevent Trump's reelection, but also to get more people involved in local politics. That's where a lot of changes could be made to help people of color and vulnerable communities, he said.

"Local district attorneys who are critical in changing local justice reform, as are judges, sheriffs, local officials — getting more folks from your community to not only vote, but run and win and have more representation," he said.

"I think the down-ballot impact we're going to have is just as important as the ballot impact."

Schulz said he hopes to raise around $25 million before November 3. He also said he wants to see the project have a legacy beyond the 2020 election, because Biden winning the presidency "doesn't mean we solve racial equity."

"Actually one of the most important things we can do is continue to fund these organizations in between election cycles, over the course of the next decade, and see what that really looks like," he said.

He said the team is still figuring out where Defeat by Tweet could go in the future, but "I think we're in its infancy for sure."

For now, "Trump is this existential threat that we have to get rid of," Schulz said, adding that the team has tried to lean into that in recent months.

Schulz said said Defeat by Tweet used to be more of a general campaign site — encouraging donors to sign up to "fill in the blank" and fight a chosen problem in the the US, including misogyny, racism, division, and climate change denial, as opposed to Trump specifically.

"Luckily Trump represents all of that," Schulz said. "You can really pick what you're passionate about. He's probably a representative of it."