Jungle nook! Three-bed home inspired by Hollywood cameraman’s Brazil movies could be your rainforest hideaway within English coast town for £695,000

Homebuyers can get a taste of the Brazilian rainforest in a quintessentially English coastal town with this stunning home that has gone on the market for £695,000.

The property was a labour of love for Roddy Barron, a camera operator who worked on films from Hammer horror through to The Mummy, Lara Croft and Star Wars. In 2005 he bought the small house next door with this plot of land.

The stylish modern house is in Hastings, East Sussex, but the lush tropical gardens were inspired by the cameraman owner’s travels in Brazil and he used plants like bamboo and palms to create an oasis on his doorstep. 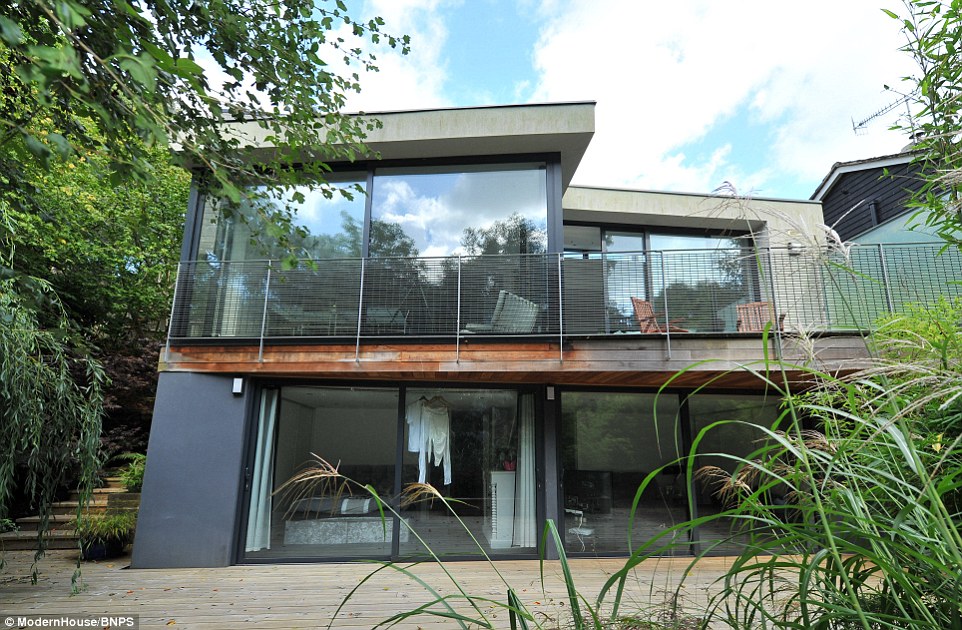 Despite being located in Hastings, Sussex, the house is surrounded by gardens that appear to be set in rainforest, providing an exotic getaway in a quintessentially English seaside town 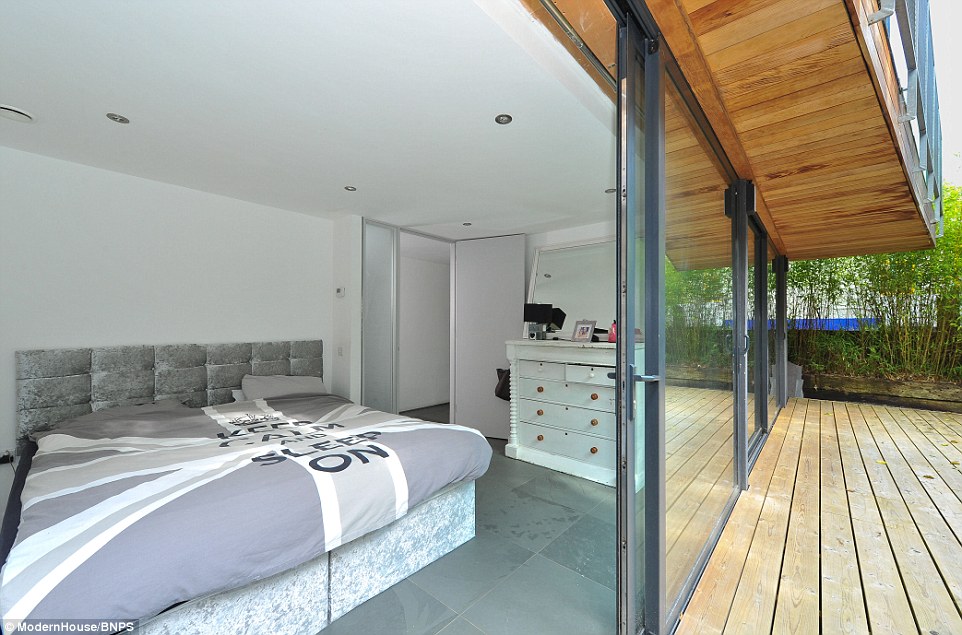 Floor-to-ceiling glass doors create an open atmosphere in the home, which the cameraman has surrounded with a jungle landscape, offering an escape from the usual surroundings of Sussex 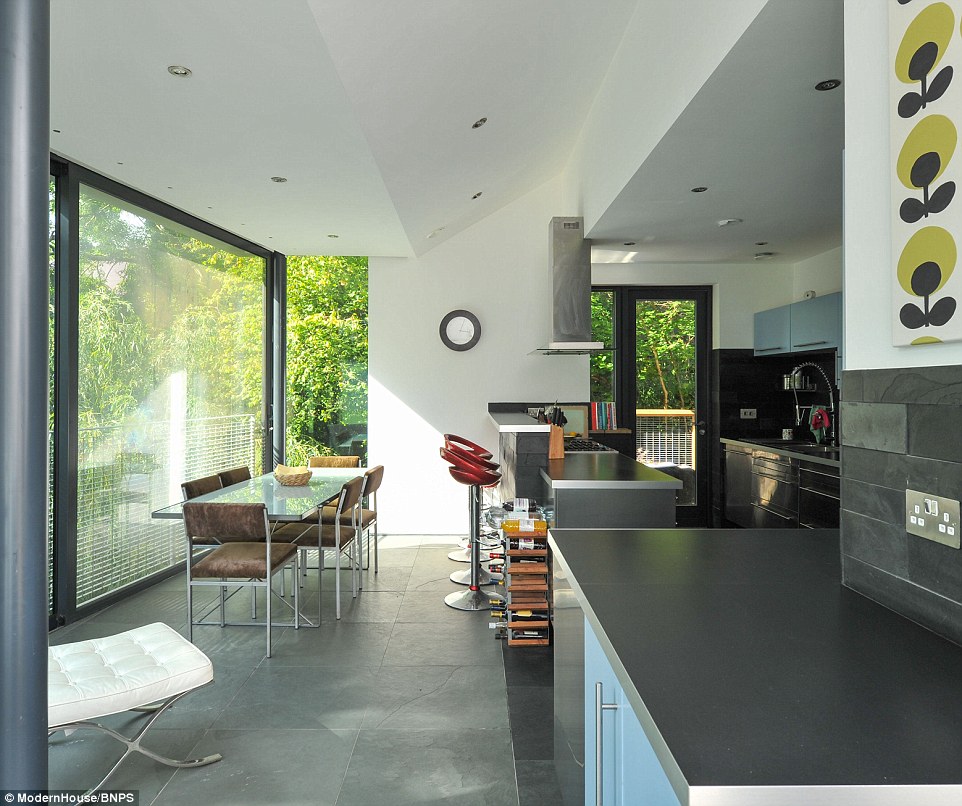 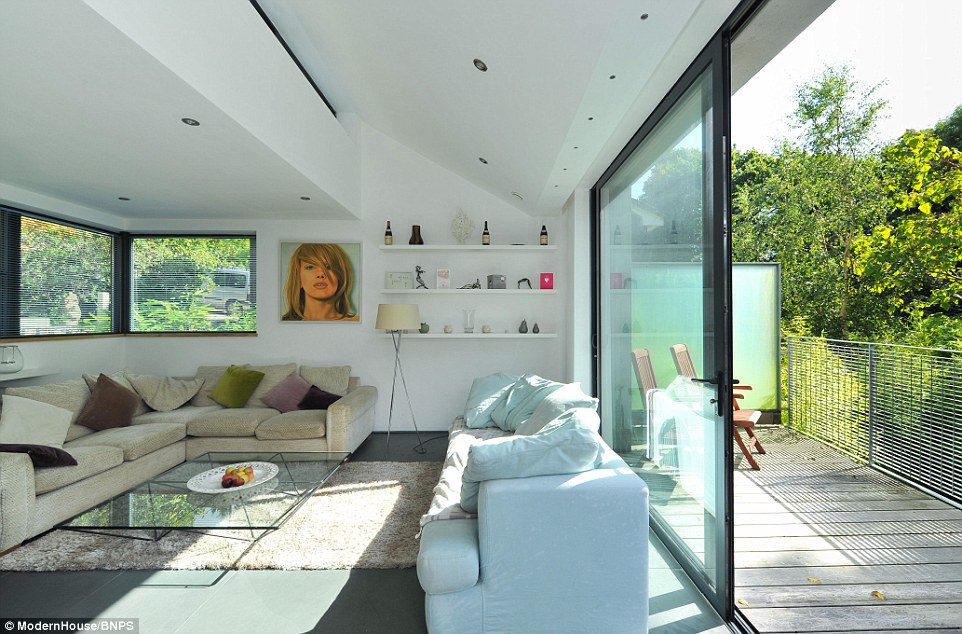 The sweeping, airy spaces combine with decking to give the impression of a summer home – but the camera man’s creation is actually in south-east England

45 Hillside Road has floor-to-ceiling glass overlooking the exotic gardens and a large deck so meals can be eaten among the treetops.

But when it came to the gardens he used inspiration from a chunk of rainforest he owned in the hills of Brazil between Rio and Sao Paulo to create a secluded wilderness.

Mr Barron spent years planting tropical plants that would grow well in the UK to create a garden as similar to his Brazilian paradise as he could get in the climate. 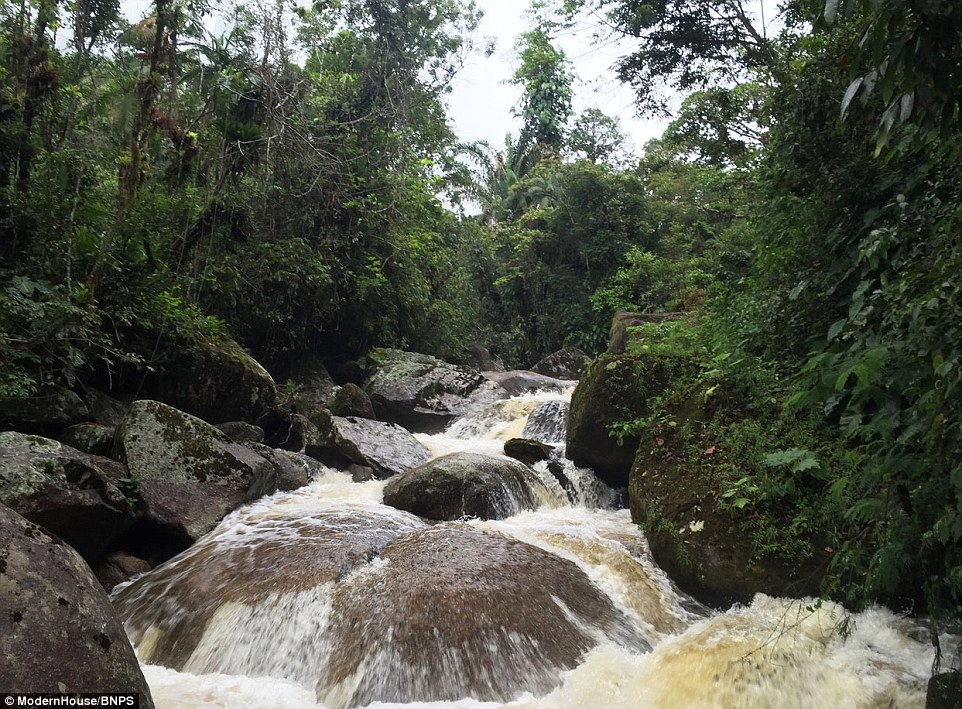 The Brazilian rainforest plot that inspired the British home: Roddy Barron took inspiration from a chunk of rainforest he owned in the hills of Brazil between Rio and Sao Paulo (pictured) to create a secluded getaway 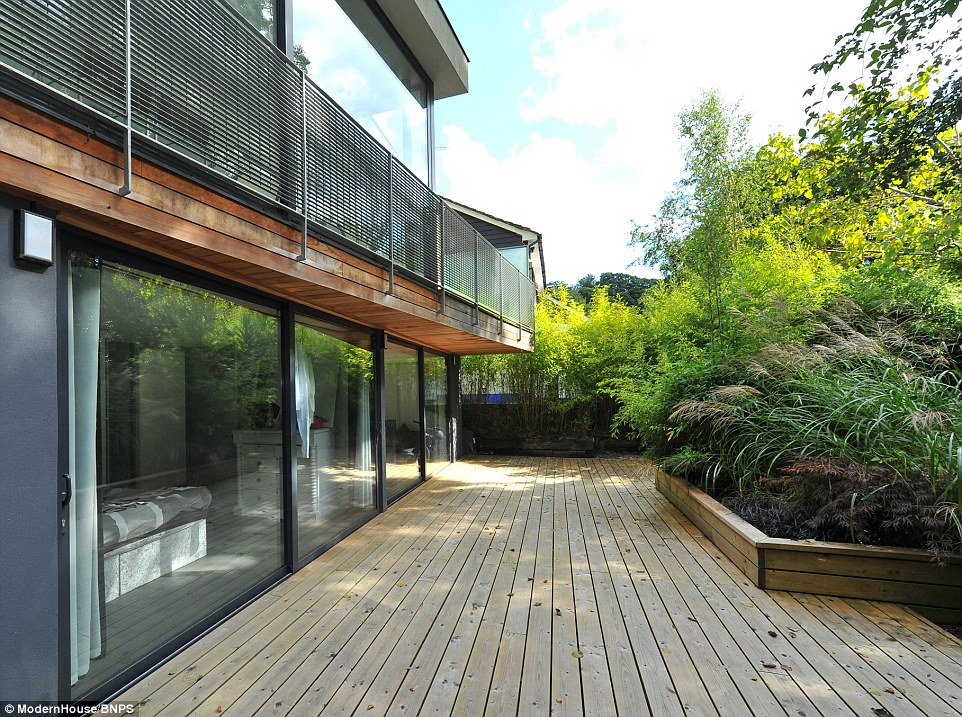 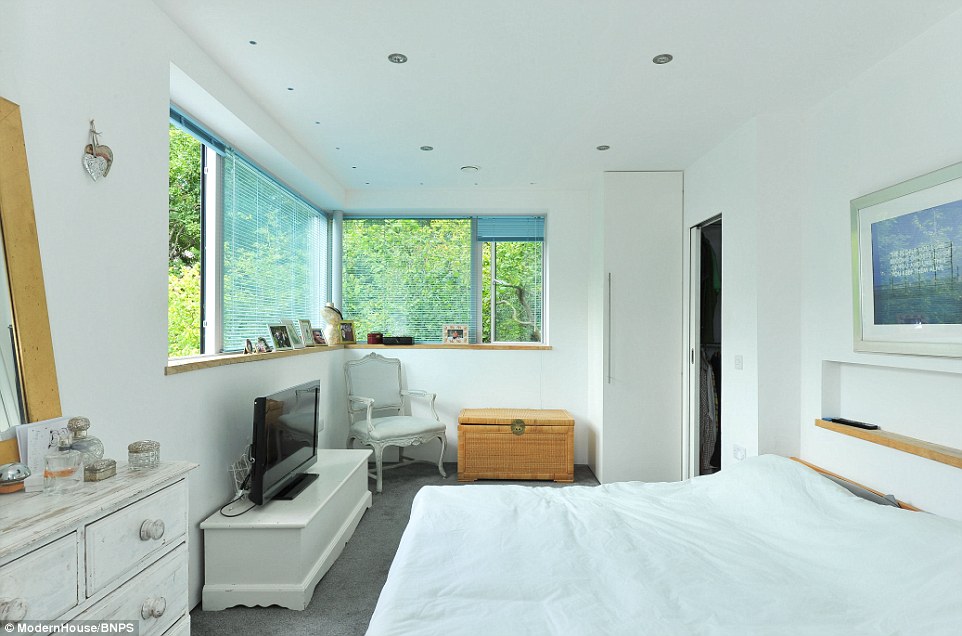 The garden has steps made from railway sleepers that lead down the hill to the summer house at the bottom of the garden, which overlooks a stream.

The house sits on the edge of parkland in the St Helen’s Wood area on a quiet no-through road. 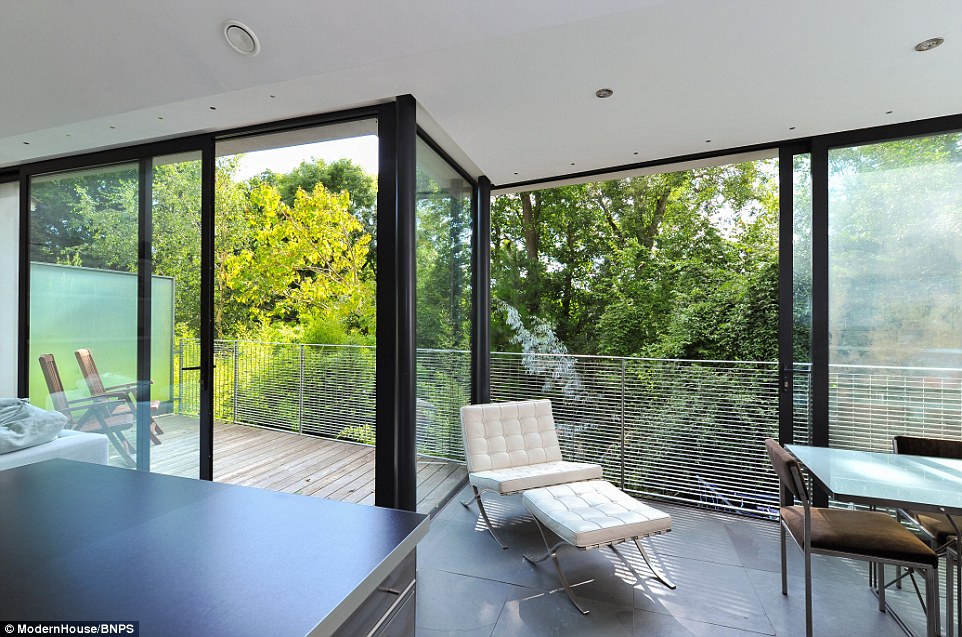 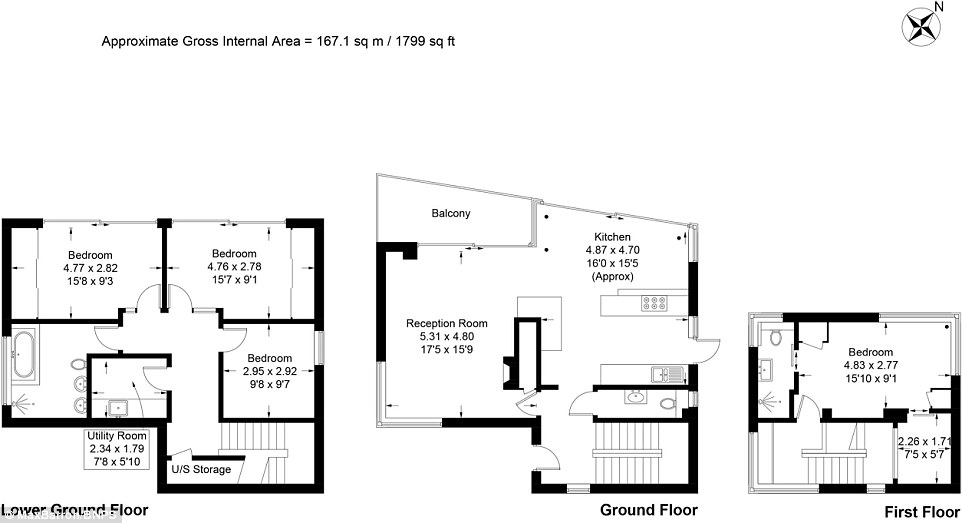 It is clad in cedar and has 1,799 sq ft of accommodation with three bedrooms and a bathroom on the lower floor, the open plan reception room and kitchen/diner on the first floor and the master bedroom with walk-in wardrobe and en suite bathroom on the top floor.

The house is super-insulated and has an air source heat pump and rainwater harvesting system. The lower bedrooms have underfloor heating and there is also a centralised vacuum system through the house.

Mr Barron died in Brazil in 2015, aged 70, and his sons Max and Louis are now reluctantly selling the property through The Modern House. 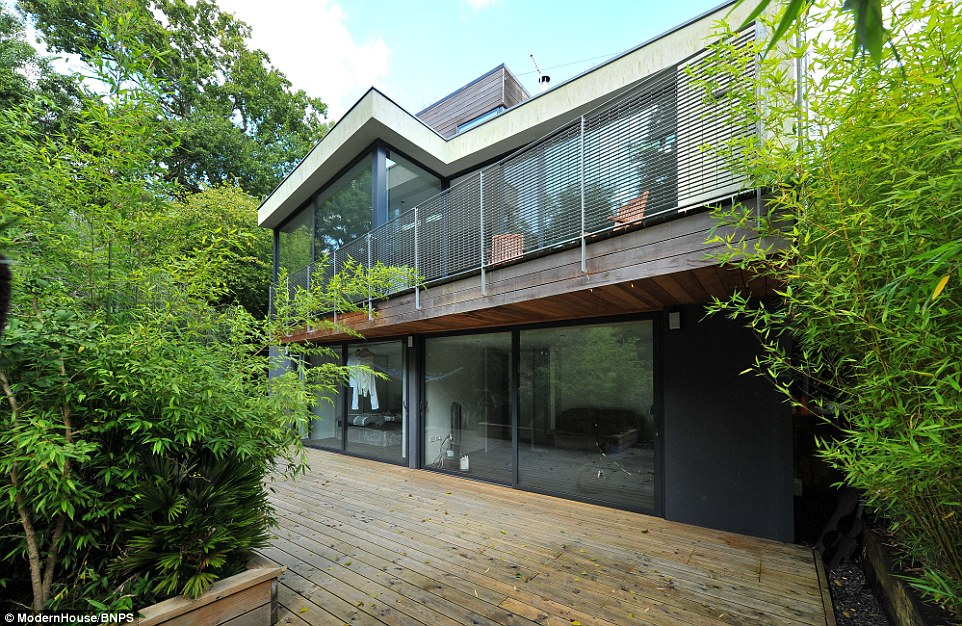 Max said: ‘My father always wanted to live by the sea and dreamed of building his own house. Every house we lived in was some sort of “project”. It’s a beautiful house and it was a real labour of love for him.

‘The build itself was epic. Dad project managed it himself and fought to get every last detail right. The ground floor glass doors were so large that he had to hire a huge crane to winch them over the house into place.

‘Torrential rains caused a bank of the road to collapse, meaning the design was re-engineered using huge concrete piles.

‘My dad travelled extensively in Brazil. He had a friend that has a house in Paraty, a small town on the coast. Dad ended up buying a plot of land just outside Paraty up in the hills. It is essentially a large chunk of rainforest with a small shack on it. 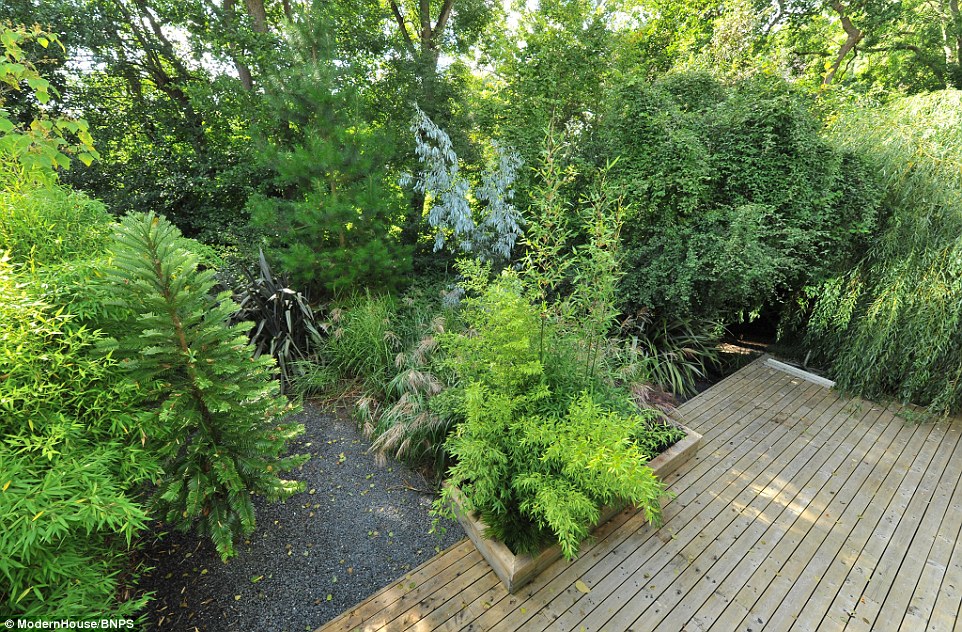 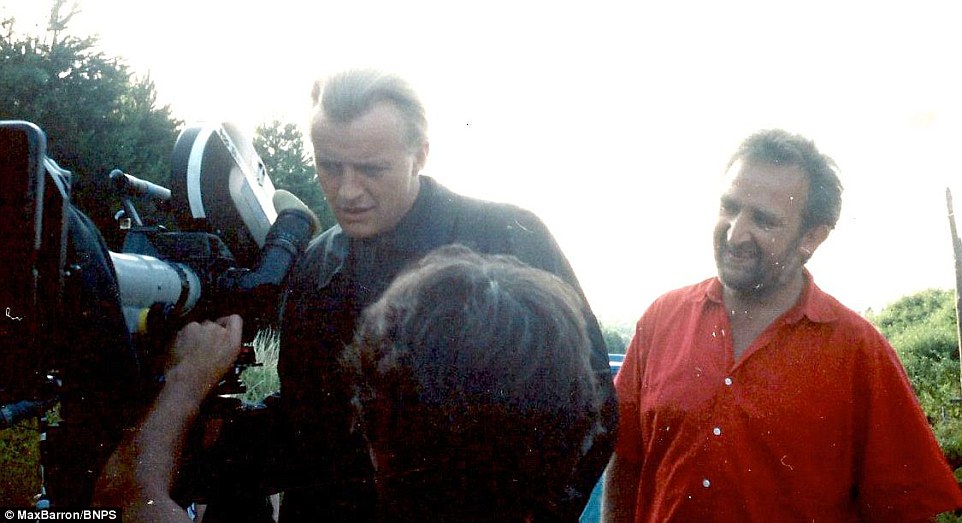 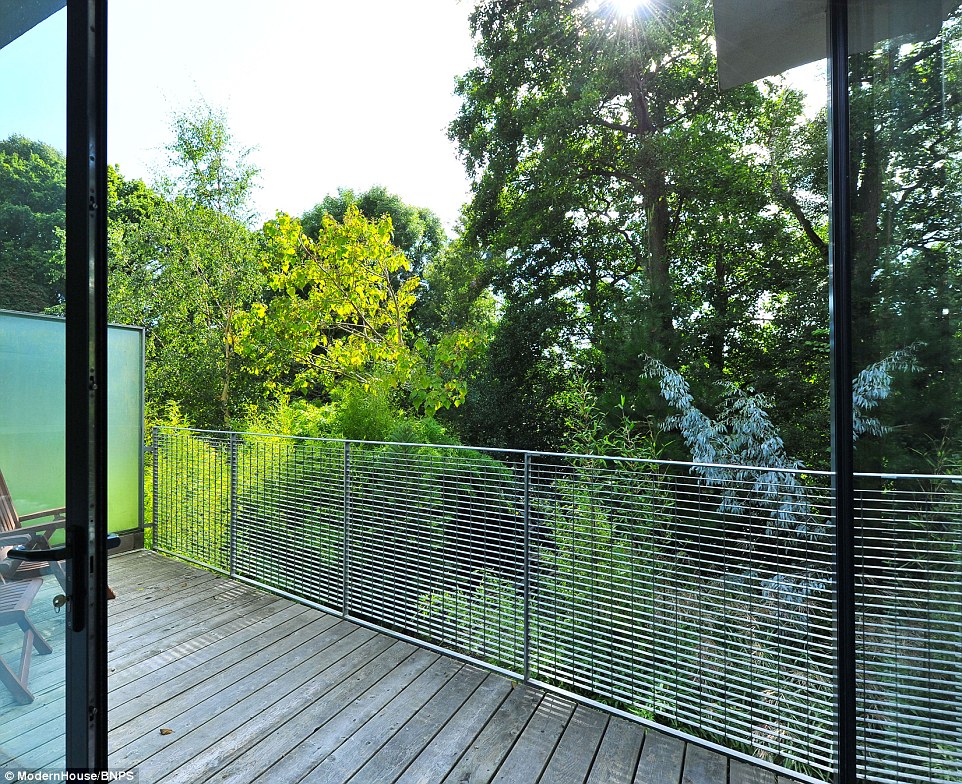 This is the view that will greet the owner daily as they relax on the balcony of the property, which sits in a Brazilian-inspired setting

‘It’s extremely lush and spectacular and he visited many times. That land inspired dad to create the gardens in Hastings using large plants, plenty of shade and little paths and walkways that you can navigate. They’re lovely to explore.

‘He used bamboo, palms, large grasses and other tropical plants that grow well in England to create the feeling of a more exotic garden than you usually find in the UK.

‘The garden was probably dad’s favourite part of the house, he spent many hours out there planting, pruning and landscaping.

‘On a sunny day with the light dappling down through the trees it’s a really magical place to be. He had large sliding glass walls fitted, which open out into the tree canopy so when you’re eating indoors on a summer’s evening you feel like you’re up in the trees.

‘My brother and I love it, but neither of us is going to live in Hastings, and it’s too big and too nice to sit empty or tenanted.

‘We slowly had to face the fact that the house needs to belong to someone who can treasure it and get as much from it as dad did, which is why we’re reluctantly selling.’