Three police officers have been injured after their car crashed into a grass embankment while they were responding to an armed robbery at Morrison’s supermarket in Liverpool.

Merseyside Police was called to the supermarket in Belle Vale Shopping Centre this morning following reports of a man with a knife stealing a cash box from a security guard.

While travelling to the scene, three officers in a marked Peugeot crashed with a BMW while the robber and another man fled in a black Volvo V40. 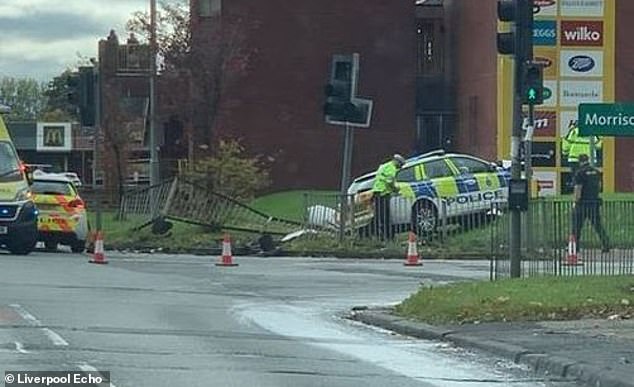 The scene of the police car crash near Morrison’s in Belle Vale, Liverpool, after the marked Peugeot containing three officers collided with a BMW this morning

All of the officers were taken to hospital as a precaution and nobody in the BMW is thought to be injured, according to the force.

It added that the security guard was left ‘shaken’ by the ordeal.

Detective Inspector Amy Smith said: ‘An investigation is underway following a robbery in Belle Vale this morning and we are keen to speak to anyone who has any information.

‘We believe two men, one wearing a hi-vis jacket, left the car on foot in Peckmill Green following the incident and enquiries are ongoing to locate them.

‘If you witnessed the incident, the vehicle making off or have any CCTV or dashcam footage, please let us know.

‘Likewise, if you witnessed the police vehicle collision or have any CCTV or dashcam footage, please get in touch.’ 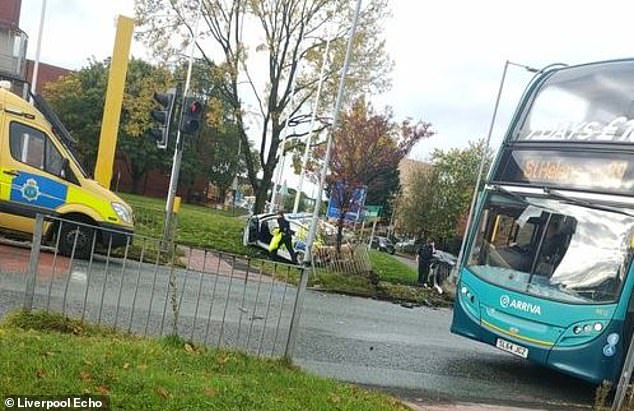 The police car seen on a grass embankment, with an ambulance seen nearby. All of the officers were taken to hospital as a precaution and nobody in the BMW is thought to be injured 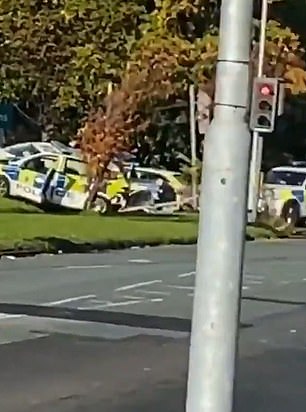 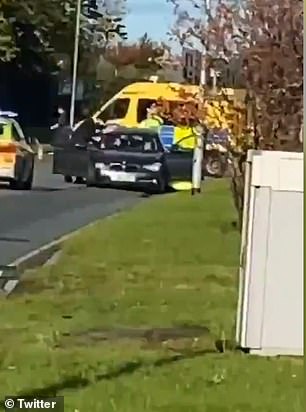 Police vehicles, pictured left, and an ambulance, right, at the scene after the crash today. Merseyside Police was called to the supermarket this morning

In a statement, Merseyside Police said: ‘Childwall Valley Road and Belle Vale Road have been closed to allow for the vehicles to be recovered.

‘Detectives remain in the area to carry out enquiries and are appealing for anyone with information to come forward.