Tory election agent, 28, who forged nomination forms and posed as Labour and Green party representative to con voters into endorsing her candidate in 2018 council vote is spared jail

A Conservative Party election agent who forged candidate nomination forms in the 2018 local elections has walked free with an 18 month suspended sentence.

Diana Danescu, 28, from South Woodford, east London, allegedly got voters to endorse Tory candidates by posing as a representative from the Labour Party and The Green Party, a court heard.

She is said to have carried out the offences while working as an election agent for 29 Conservative candidates in the Hackney Council elections on May 3, 2018.

One voter found her own name – and that of her husband – listed as an assentor for three Conservative candidates they would never have supported.

Danescu denied the allegations but was convicted of 16 counts of causing or permitting a false signature to be included in a nomination form at Nightingale court Prospero House after a jury deliberated for 27 hours. 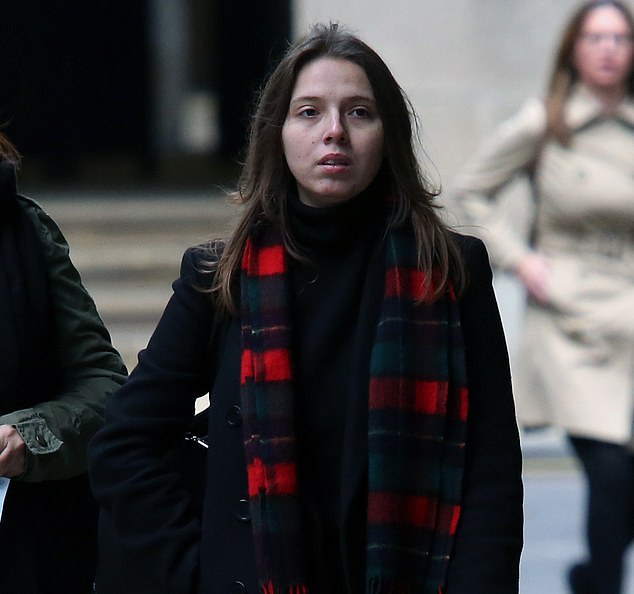 Conservative Party election agent Diana Danescu, 28, was convicted of 16 counts of causing or permitting a false signature to be included in a nomination form

Danescu appeared at Southwark Crown Court today as she waited to be sentenced.

Defence lawyer James McCrindel said: ‘The authorities of course speak about the issue of the attack on the democratic process, in this instance there was not a dishonest outcome in terms of an election.

‘There was never any serious prospect of any of these candidates being elected.

‘She knew that these people would not get elected.

‘The offence for which Ms Danescu falls to be sentenced remains serious, but it does remain that looking at all the relevant facts of this offending and the nature of it, that the court can still deal with her in a way that punishes her but does not mean an immediate loss of liberty.

‘She is fit and suitable to carry out unpaid work.’

Mr McCrindel said Danescu was a positive, ‘charitable person’ who cared about local communities and stressed that she presented a ‘very low risk of reoffending’ and had no criminal record.

The barrister said: ‘She can be described as somebody with some very positive attributes in terms of her history and background.

‘She has volunteered at a crisis charity during Christmas helping the homeless in the Paddington area, there is an outreach centre there.

‘She had also been involved with two charities, one supporting children in Namibia and another to do with drinking water in Uganda.

‘She had also fundraised for those organisations. She presents a very low risk of reoffending.

‘She gave up the job she had because of the conviction so she is not presently working sadly, but she does want to get work.’

In passing sentence Judge Jeffrey Pegden said: ‘From December 2017 you were employed as a campaign manager for the Conservative party. 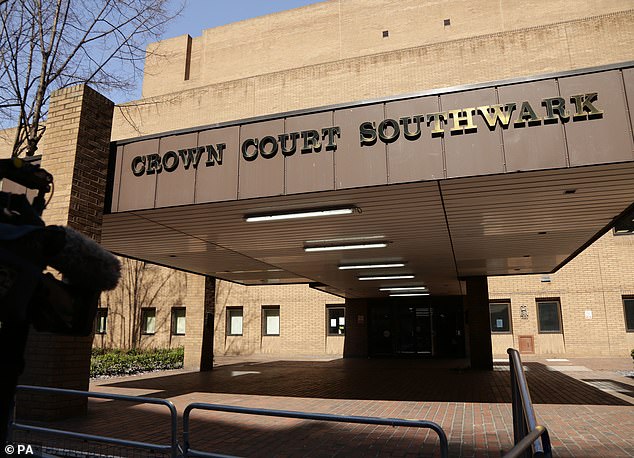 Danescu, who allegedly got voters to endorse Tory candidates by posing as a representative from the Labour Party or The Green Party, appeared at Southwark Crown Court today as she waited to be sentenced

‘In late winter and spring of 2018 you also acted as a Conservative election agent for the south part of the local borough of Hackney.

‘Support for the Conservative Party was very low but the party did want to ensure that the party was represented in every constituency.

‘You job was to deliver the nomination forms for the candidates.

‘You had to collect something like 300 signatures and it is those signatures which you obtained by wholly misleading the elector about what the form was for, by saying it was for the Green Party or Labour Party or by actually falsifying the signatures of registered electors.’

Judge Pegden said Danescu’s ploy all came to an end when a local resident found she was wrongly listed as a Tory supporter.

The judge continued: ‘Your crime amounted to misleading assentors as to the purpose of the nomination forms you were presenting to them and also falsifying signatures.

‘The contamination and manipulation of the electoral system in this country whether it is on a local or national level, is viewed extremely seriously by the courts.

‘The courts must ensure that a true vote, or indeed in this case, a true ascension has been given at the heart of the democratic process.

‘Your actions had nothing to do with a lack of training, you are an educated and highly intelligent woman.

‘It seems you still blame a lack of training, and indeed show little remorse for your actions.

‘It is right to say none had a chase to be elected, there was not material gain to the Conservative Party apart from getting full ballot papers – which they wanted.

‘You were driven by the belief that you would look capable and efficient in the eyes of your masters.

‘Your culpability caused the assentors or purported signatories outrage.

‘That outrage lays right at the heart of your case.’

Judge Pegden told Danescu she had narrowly escaped a prison sentence after he had ‘just concluded’ she did not present a risk to the public.

He said: ‘I have just, and I emphasise just, concluded that it is because of your hitherto good character.

‘I don’t believe now that in the future you present a risk to the public.’

Danescu, from South Woodford, east London, denied but was convicted of 16 counts of causing or permitting a false signature to be included in a nomination form.

She was sentenced to six months custody, suspended for a period of 18 months.

Danescu was also ordered to carry out a total of 200 hours of unpaid work and pay £2,000 in court costs.