Jones joined the ABC in 1963 and went on to host Four Corners. She was the first presenter for the ABC’s profile series Australian Story and worked on the program from the show’s beginning in 1996 to her retirement in 2016. 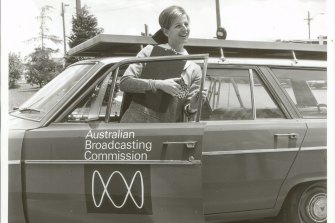 Caroline Jones on location for This Day Tonight.Credit:John Pearson

“I go by my own choice, but always with a great emotional attachment to the ABC and Australian Story. I’ll always be a devoted ABC person,” she told The Sydney Morning Herald and The Age at the time.

“It’s a question of timing,” the then 78-year-old added. “As you get older you get a sense of all the other things there are to do, and you realise that the time to do them isn’t endless.”

For eight years she presented the interview-based The Search For Meaning on Radio National. The conversations from that program were collected in four books released between 1989 and 1995. She has also authored two other books, though says she has no intention of writing another.

In 1988, Jones was made an Officer of the Order of Australia.

ABC director of news Gaven Morris, when farewelling Jones from her position at the broadcaster in 2016, said she was “a legend of Australian journalism, a trailblazer, an inspiration and a role model for so many women in the media. She is also a fine journalist and broadcaster, one of Australia’s best communicators and a terrific human being.”