Has the Government just ruined ALL foreign summer holidays? Travel firms warn of a wave of cancellations across France, Italy and Greece after ministers hit the ‘nuclear button’ and put Spain on quarantine list at just five hours notice

The travel industry is braced for a wave of cancellations by worried holidaymakers this morning after the Government reimposed quarantine restrictions on Spain at just five hours notice.

Ministers announced at the weekend that everyone returning from Spain to the UK will now have to self-isolate at home for two weeks because of a spike in coronavirus cases.

The Government has stood by its decision to strike Spain off the UK’s list of safe destinations but the timing of the shift has sparked widespread fury amid fears it will be the ‘final nail in the coffin’ for some tourism firms.

The Spain decision is believed to have spooked many people who had booked trips in France, Italy and Greece with operators already reporting ‘lots of cancellations’.

Travel firms said reimposing quarantine on Spanish travellers had ‘put fear into people’ as they warned the ‘rug has been pulled from under our feet’.

Other experts said the Government had effectively pushed the ‘nuclear button’, putting at risk the entire foreign summer holiday season.

There are growing fears that a rise in coronavirus cases in some European countries like France and Germany will see quarantine reimposed on those countries as well.

The Foreign Office is now advising against ‘all non-essential travel to mainland Spain’ but the Canary and Balearic islands are currently exempt from the ban.

However, the ‘blanket’ quarantine rules apply to the whole of Spain, including those islands, prompting suggestions that the current guidance is confused. 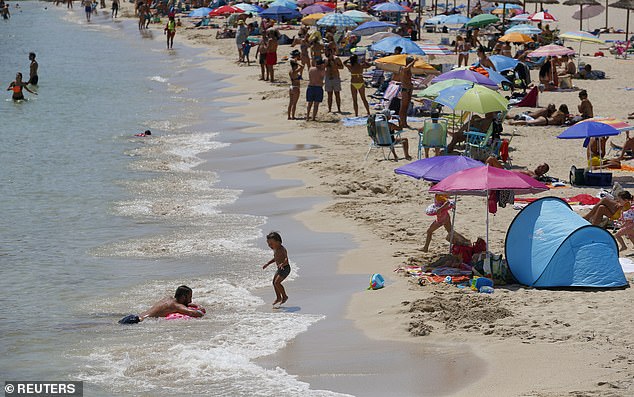 Holidaymakers returning from Spain to the UK will now have to self-isolate for 14 days when they get back. A beach in Mallorca is pictured on July 26 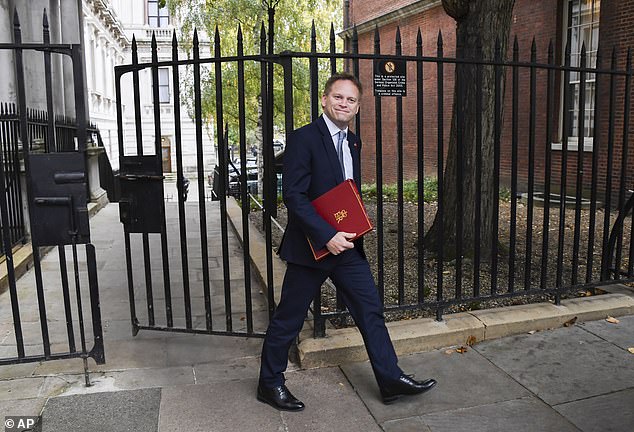 The reimposition of quarantine on Spain was announced at just five hours notice. Grant Shapps, the Transport Secretary, was one of those caught out as he is currently on holiday in he country

Ministers under pressure to exempt Spanish islands from quarantine rules

The UK Government was today under fire for telling British tourists they can travel to the Spanish islands but must still go into quarantine when they return home.

The Foreign and Commonwealth Office has advised UK travellers against all non-essential travel, including holidays, to mainland Spain.

But this does not apply to the Canary Islands – Tenerife, Fuerteventura, Gran Canaria, Lanzarote, La Palma, La Gomera, El Hierro and La Graciosa – and the Balearic Islands – Majorca, Menorca, Ibiza, and Formentera.

However, people returning from anywhere in Spain – including the Canaries and Balearics – are now required to go into 14 day quarantine on return.

The Spanish government and Britain’s travel industry trade body, the Association of British Travel Agents, argue it is not necessary for the Canaries and Balearics to be included in the quarantine, pointing out that infection rates on these islands are low.

Abta has told the Government to ‘consider’ changing the rules, while Spain’s Foreign Minister Arancha Gonzalez Laya is trying to convince Britain to exclude the Balearics and Canaries, saying: ‘Spain is safe, it is safe for Spaniards, it is safe for tourists.’

Foreign Secretary Dominic Raab said yesterday that the Government ‘can’t make apologies’ for the decision it made on Saturday which was announced less than five hours before coming into force.

It means that all arrivals from Spain and its islands will now have to self-isolate for 14 days upon their return to the UK.

The quick reimposition of the restrictions meant that some holidaymakers only found out they faced quarantine when they got on board their flight from Spain back home.

It was not just the public who were caught out by the sudden announcement.

The quick turnaround meant Transport Secretary Grant Shapps, who is currently in Spain for his summer break, will have to join thousands of others in being forced to isolate for two weeks on his return to Britain.

Paul Scully, minister for London, will also have to quarantine after declaring on social media that he was on holiday in Playa Dorada, Lanzarote.

The decision to reimpose quarantine has rocked the travel industry after months of international flight restrictions decimated the sector.

Paul Charles, founder of the PC Agency, the travel consultants, said the latest bad news could result in ‘many more job losses’ as holidaymakers cancel their plans.

He said: ‘People are cancelling not just Spain but other short-haul bookings. We’ve heard of lots of cancellations for holidays to France, Italy and Greece. Dominic Raab said they wouldn’t hesitate to introduce quarantine measures on other countries and that’s simply put fear into people.

‘The implications of not getting bookings throughout late summer means that there will be many more job losses in the travel industry and more businesses will go under. Many were on a cliff edge, this will push them over.’

He added: ‘The loss of confidence is a real hammer blow and the nail in the coffin for so many businesses.’

Gemma Antrobus, from the Association of Independent Tour Operators, said: ‘It feels like the rug has been pulled from under our feet. The fact such a drastic change can happen to Spain, the UK’s most popular destination, will really worry people that it could happen to any destination.’

Mr Raab, speaking to Sky News’ Sophy Ridge On Sunday programme, refused to rule out the possibility of more countries being taken off the UK’s safe travel list.

‘As we’ve found with Spain, we can’t give a guarantee,’ he said, before adding that there was ‘an element of uncertainty this summer if people go abroad’.

The Telegraph reported that officials in both France and Germany have warned of possible new lockdowns as parts of Europe prepared for potential second waves of Covid-19 infections.

French health authorities said at the weekend that the country’s R-rate was up to 1.3 and that daily new infections on Friday had risen to 1,130 – indicators resembling those seen in May, when France was coming out of its strict two-month lockdown.

The decision to reimpose restrictions on Spain left holidaymakers frustrated, with some saying they would not have travelled if they knew they would have to spend a fortnight self-isolating afterwards.

Close to 1.8 million holidays were likely to have been thrown into chaos by the move, according to travel company The PC Agency, which analysed the number of seats booked on flights leaving the UK for Spain between July 26 and August 31.

Tour operator Tui said that, due to the change in the Government’s travel advice, it was cancelling all holidays to mainland Spain up to and including August 9.

Labour shadow health secretary Jonathan Ashworth criticised the Government’s handling of the affair, labelling it ‘frankly shambolic’, and called for financial support for those now forced to shut themselves away after their arrival home.

He said: ‘I can understand why the Government have made this decision and it’s a reminder that we can’t be complacent about this virus.

‘One of the big blunders from Boris Johnson back in March was not quarantining those coming from France and Spain and Italy because that’s how the virus was seeded.

‘So, I understand why they’ve made the decision but the way in which this decision has been made in the last 24 hours is frankly shambolic.’

Spanish ministers are now in talks with the UK about exempting the Canary and Balearic islands, which include Ibiza and Majorca, from the requirement to self-isolate for two weeks due to lower infection rates in those regions than on the Spanish mainland.

The Foreign Office guidance advising against all but essential travel to mainland Spain does not include the islands but ministers have opted to apply blanket quarantine arrangements across the Spanish territories.

‘Like in any other European country we are seeing outbreaks – the outbreaks in Spain are perfectly controlled.’