Travellers blast queues at Heathrow on another day of chaos

Heathrow Airport has said it ‘isn’t possible’ for people to socially distance in its terminals as travellers blast the long queues at passport control.

Shocking images shared to social media today showed hundreds of travellers -including children and the elderly – waiting in lines.

Witnesses said the queues took at least an hour to clear as Border Force officers checked each passenger’s proof of a negative PCR test and their locator form.

The Home Office has insisted they have ‘the necessary staff’ needed to get through the hoards of passengers – and claim it is ‘ultimately up to individual airports to ensure social distancing on site.’

But Heathrow Airport said Border Force are responsible for the checks, and claim ‘social distancing in an airport environment isn’t really possible’.

In another day of coronavirus news: 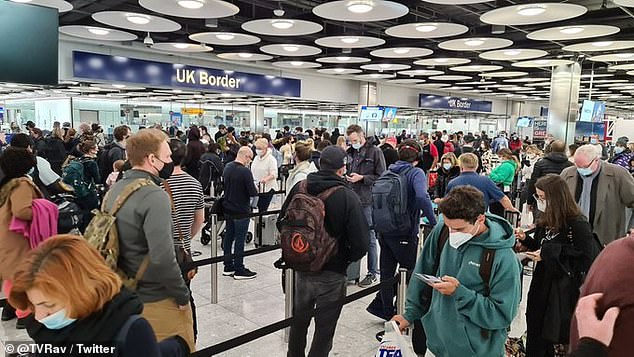 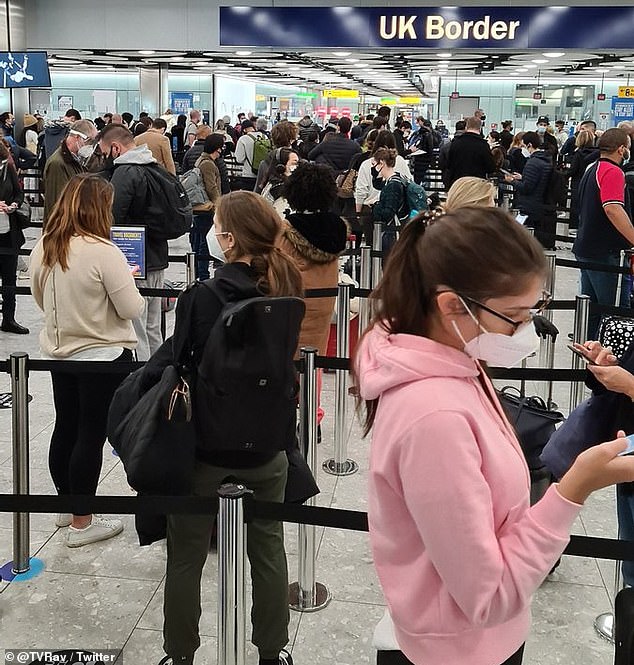 Sharing a picture of the queues at Heathrow Airport today, Rav wrote: ‘I’m predicting a good hour to get through the UK Border at Heathrow this morning. E-gates offline, presumably for Covid tests and passenger locator form checks.’

Sajiv Mathew shared another image, adding: ‘Surely there is a more efficient way to verify passenger documentation. Hundreds of passengers including children and the elderly, have been waiting in line for almost two hours.’

Clare Rathsack shared a picture of a queue in Terminal 2, writing: ‘Ridiculous. So few flights and complete chaos at T2 border control. Sort it out.’

In response to mounting concern over the large queues, a Heathrow Airport spokesperson told Sky News: ‘We’ve been clear since last May that social distancing in an airport environment isn’t really possible.

‘To put that in context, if you had one aircraft of let’s say 300 people, you’d need a queue about 1km long to socially distance just one aircraft, which is why last summer we mandated face coverings in the airport.’ 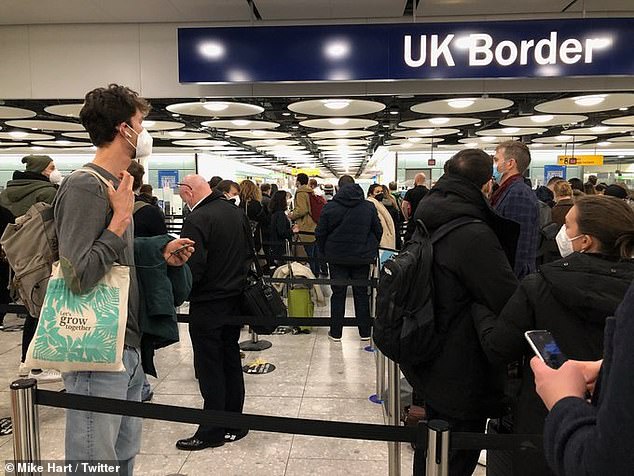 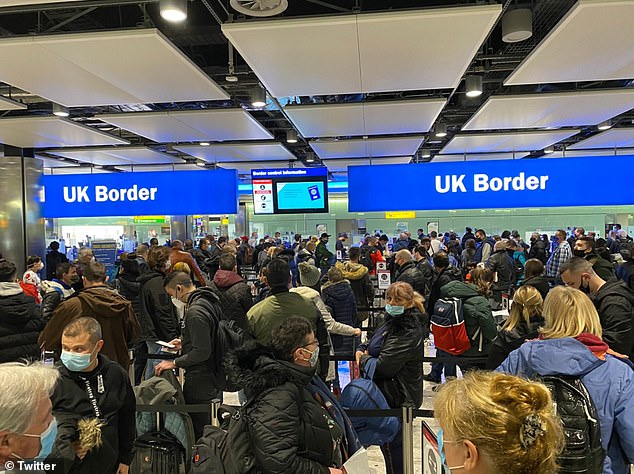 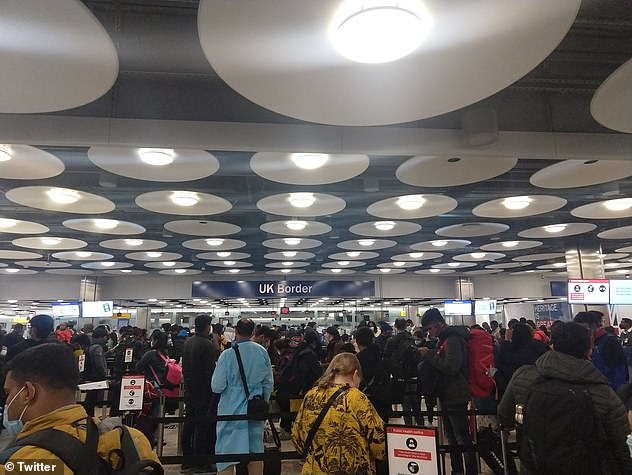 A Government spokesperson yesterday said: ‘We are in a national lockdown to protect the NHS and save lives. People should not be travelling unless absolutely necessary.

‘You must have proof of a negative test and a completed passenger locator form before arriving.

‘Border Force have been ramping up enforcement and those not complying could be fined £500.

‘It’s ultimately up to individual airports to ensure social distancing on site.’

Heathrow said that ‘Border Force is currently experiencing some delays’ getting through the passenger checks, and the airport has measures to remind people of what rules are in place.

A spokesperson told MailOnline today: ‘We have extensive signage throughout the airport – including in immigration halls – reminding passengers to adhere to the Government’s social distancing guidance, but there are points in the airport journey where social distancing is not always possible. 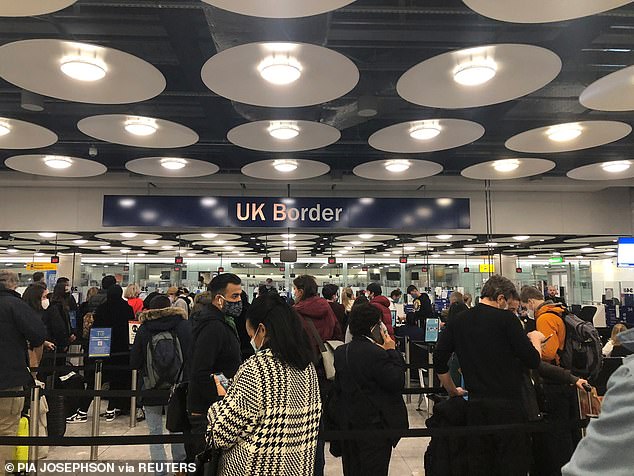 People queue at terminal 5 of Heathrow Airport on Friday, as the spread of the coronavirus disease continues 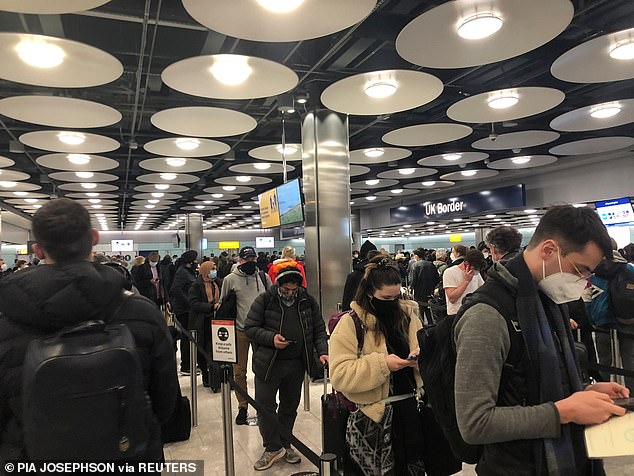 Heathrow said that ‘Border Force is currently experiencing some delays’ getting through the passenger checks (queues on Friday, pictured), and the airport has measures in place to remind people of what rules are in place 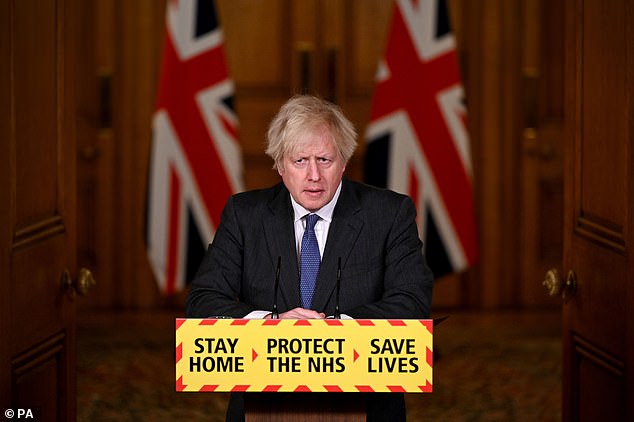 Asked whether new border measures were coming, at the press conference, Mr Johnson said: ‘I really don’t rule it out, we may need to take further measures still’

‘That is why face coverings are mandatory throughout the terminals, as they help to reduce the risk of transmission at the airport.’

Arrivals could have to pay for their stays while they self-isolate for 10 days, or even a fortnight.

Amid fears that a strain of coronavirus that originated in South Africa may be more resistant to vaccines Mr Johnson told the nation making it too easy for it and other variants to enter would under all the hard work put in by locked down Britons.

Desperate wrangling is going on within Cabinet over the shape of the restrictions, set to be finalised at a meeting of the core Covid O sub-committee on Monday.

A range of escalations are being considered to combat the global spread of variants, with a full border closure to foreign nationals still on the table. However, the most likely outcome is a version of the enforced isolation system used by countries such as Australia and New Zealand.

Asked whether new border measures were coming, at the press conference, Mr Johnson said: ‘I really don’t rule it out, we may need to take further measures still.

‘We may need to go further to protect our borders.

‘We don’t want to put that [all the effort to control the virus] at risk by having a new variant come back in.’

Under plans being discussed, arrivals would potentially have to pay for their stays at hotels near airports while they self-isolate for 10 days, or even a fortnight.

It was yesterday revealed that Britain faces becoming a global pariah as countries around the world consider tougher travel restrictions in a bid to keep out Britain’s ‘more deadly’ Covid strain.

EU leaders are said to be drawing up a blue-print which could see travel banned from the UK to all of the union’s member states.

It come as the Netherlands is set to ban all passenger flights and ferry travel from the UK tonight.

Portugal last night banned travel both to and from Britain due to fears over the new variant.

How would ‘quarantine hotels’ and GPS tracking work?

Ministers are scrambling to upgrade the border quarantine system amid fears the rules are being flouted.

Civil servants have been ordered to study the ‘managed isolation’ arrangements used by countries such as Australia, New Zealand and Singapore.

Under those schemes, arrivals from abroad must stay in quarantine hotels for 14 days at their own expense.

Passengers are transferred direct from airports to the hotels, and largely confined to their rooms – with the authorities monitoring to check no-one leaves.

The systems have been credited with stopping Covid cases being imported.

However, some airlines have stopped flying to Australia and New Zealand as the routes are not sustainable – with many citizens stranded abroad as a result.

Officials have also looked at the arrangements in Poland, where isolating individuals face ‘enhanced monitoring’.

That includes being contacted once a day and made to send a picture of themselves at the location where they are meant to be quarantining.

The pictures are validated using facial-recognition technology and GPS data.

However, the option is thought to have been rejected as too intrusive and difficult to implement on scale.

And more countries could now follow suit after Boris Johnson and top scientific advisers warned the UK’s mutant strain could be 30 per cent more deadly than older versions of the virus.

Meanwhile, cases of the UK variant have today been confirmed in both America and Canada.

Officials in the Philippines, which had banned incoming UK flights over Christmas, said 16 cases of Britain’s mutant strain had also been discovered.

One case of the UK strain had previously been detected on the South East Asian islands, the country’s Department of Health said.

But officials say a further 12 cases have now been found in the Bontoc Mountain region, one case in the La Trinidad area and one case in Calamba City.

Another two cases are said to have been brought in from Lebanon, health officials say.

In Canada’s Nova Scotia region health chiefs have today reported one confirmed case of the UK variant and another of the South African variant.

In New Jersey, US, officials today reported their first two cases of the UK Covid strain.

Meanwhile EU leaders have reportedly drawn-up a travel blueprint that could lead to a ban on passengers from the UK.

EU officials held discussions this week over border controls, including between member states, with new measures set to be announced on Monday.

These could include bans on travel from countries outside the bloc, such as the UK.

The Netherlands are one country to impose tighter restrictions – banning passenger flights and ferries from the UK and Northern Ireland from tonight.

Hawks led by Priti Patel and Matt Hancock are pushing for blanket action in the UK, with sources insisting the policy will be ‘worthless’ unless it covers all travellers.

But Transport Secretary Grant Shapps and Chancellor Rishi Sunak are said to be lobbying for a more nuanced approach. That could see measures targeted on arrivals from high-risk countries, or just foreign nationals who usually will not have homes in the UK where they can isolate safely.

Tory MPs told MailOnline that the measures will ‘kill’ the travel industry, and urged the government to make sure they are ‘highly targeted’.

Negotiations are already believed to be taking place with hotel chains, while London Mayor Sadiq Khan has announced he is in favour.

The powerful Covid O Cabinet sub-committee is due to thrash out the ideas on Monday.

Environment Secretary George has refused to rule out even more drastic action this morning, with foreigners barred from coming to the UK altogether.

Asked about the possibility, Mr Eustice told Sky News: ‘We always keep these things under review. And it has been considered.

‘There is concern at the moment about the number of mutant strains.’

Any new restrictions would be a further blow to the beleaguered travel industry and put the holiday plans of millions at risk.

Mr Sunak and Mr Shapps are pushing against new travel measures over the ‘severe’ impact they would have on aviation, one of the hardest hit sectors during the pandemic, and the wider economy.

But Ms Patel and Mr Hancock are eager to enforce harsher rules to stop mutant strains from entering the country, potentially undermining the vaccine operation. 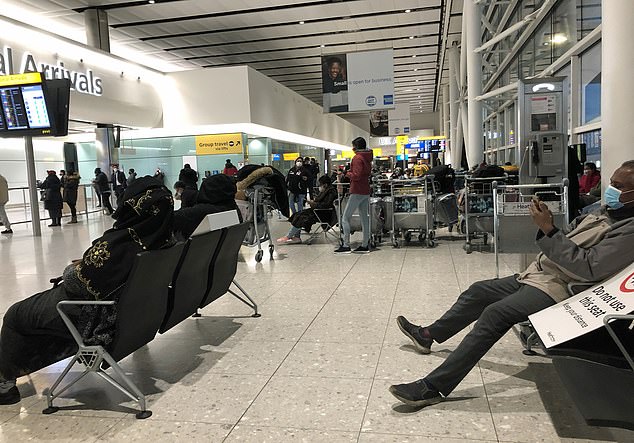 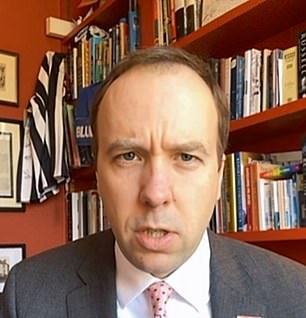 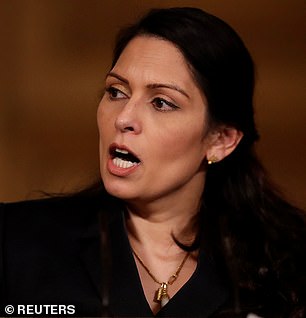 Hawks led by Priti Patel (right) and Matt Hancock (left) are pushing for blanket action, with sources insisting the policy will be ‘worthless’ unless it covers all travellers 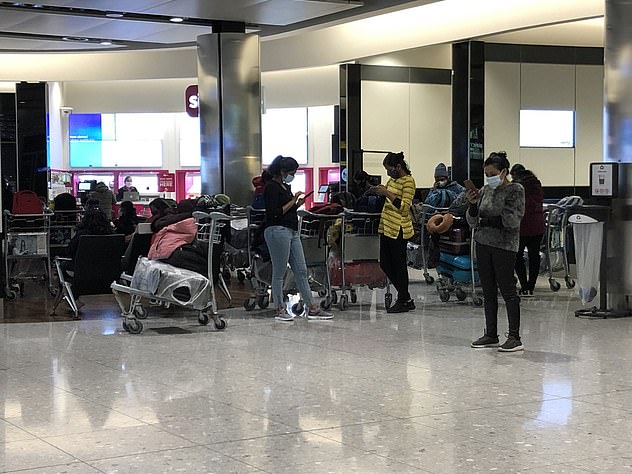 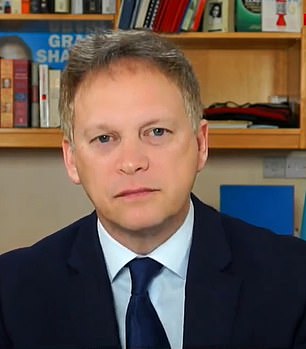 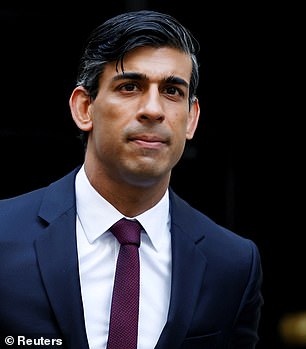 Options on the table include imposing the ‘quarantine hotels’ for all arrivals, or for ‘high risk’ countries.

The ‘test and release’ scheme, under which people can cut their isolation to five days by having a second test, could also be suspended.

A Cabinet source among the hawks told MailOnline on the quarantine hotel idea: ‘No-one should be going anywhere anyway. If it doesn’t apply to everyone it makes it worthless.’

They pointed out that tourism had stopped, so Britons were the main source of movement in and out of the country. ‘It is Brits going and then returning,’ they said.

The source also insisted the travel industry had been treated far more gently than the arts and other sectors up to now.

But one senior source told The Telegraph: ‘Once in place, the restrictions would be difficult to exit, as Australia and New Zealand have found and their economies are suffering as a result. Nor have their quarantines and managed self-isolation proved watertight.’

Marriott yesterday denied that was in talks with the government about using its hotels for quarantine.

A spokeswoman for IHG Hotels & Resorts, which runs Holiday Inn, said: ‘IHG and our partners have worked closely with national and local government and the relevant health bodies to support the recovery effort during the pandemic.

‘Due to guest confidentiality we would not comment on individual bookings.’ 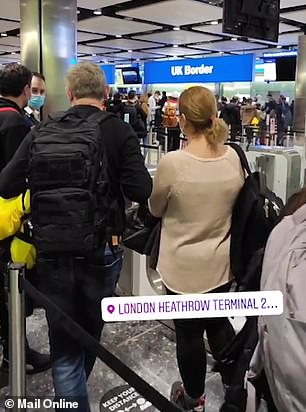 Mr Khan voiced backing for the move, telling LBC radio: ‘We have had until now, even now, people arriving in our country, getting off a plane, using Tubes to go to home or to a hotel in the centre of London, that doesn’t make any sense to me.’ 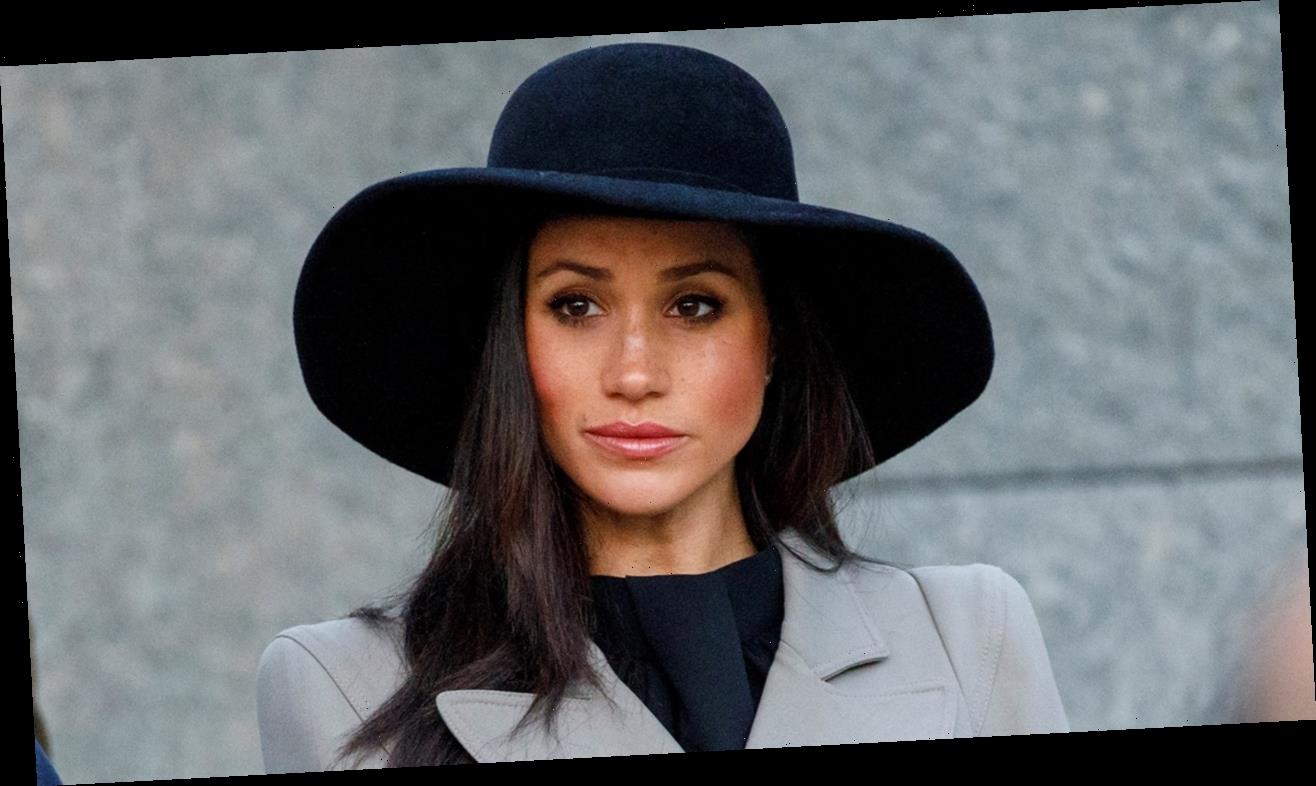 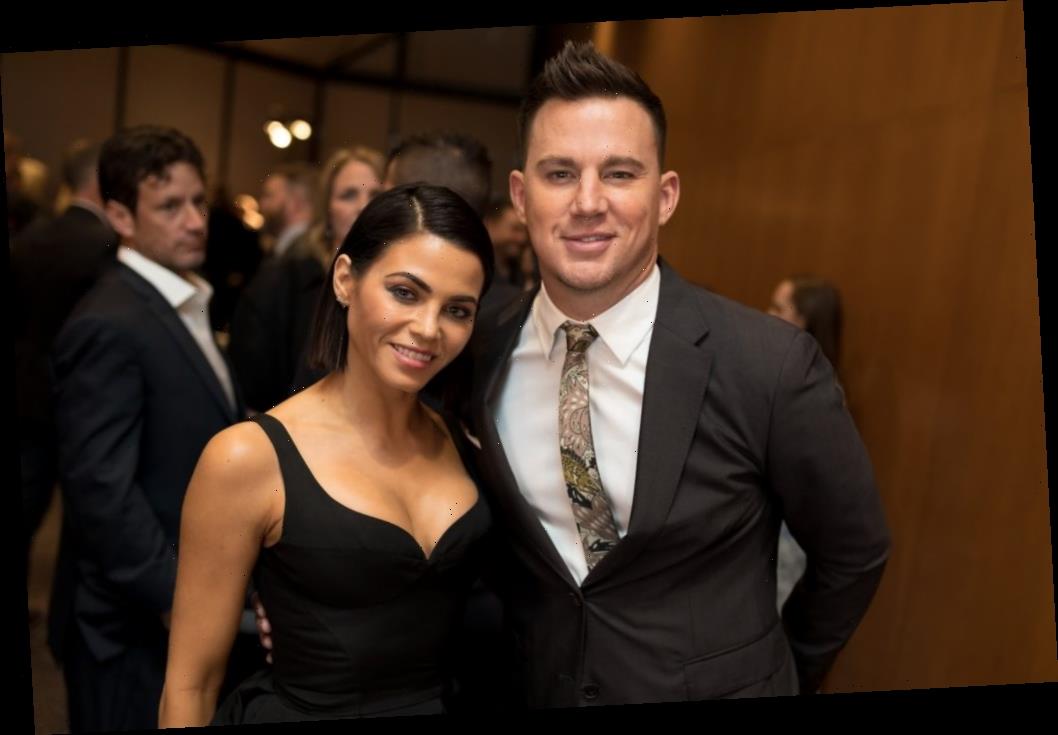