The nation’s eSafety Commissioner says she will use “all available powers” to keep Australians safe online as her office prepares for the rollout in January of tougher laws to tackle internet trolls sharing intimate images without a person’s consent.

From January 23, a suite of new powers under the Online Safety Act take effect, including a beefed-up regulatory regime for tackling image-based abuse. The regime also extends to images that appear to be of a person, capturing so-called deep fakes that have been doctored to use another person’s face or body. 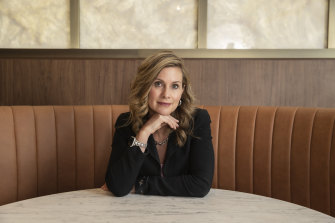 On Wednesday, eSafety Commissioner Julie Inman Grant will deliver a speech to the Australian Cyber Conference setting out her regulatory priorities under the new laws, which also include a world-first adult cyber abuse scheme.

The new laws include “expanded powers to better protect all Australians across all platforms where this harm is occurring, including video gaming platforms, dating websites, and encrypted private messaging apps”.

Her office will continue to work collaboratively with industry “to proactively improve safety standards across the industry and encourage greater transparency and accountability”, she is expected to say.

“But make no mistake, we will use all available powers at our disposal when it comes to keeping Australians safe online.

“While we have graduated regulatory tools to address online harm, there will no doubt be times when immediate use of our firmer enforcement measures is needed, and warranted.”

Under the image-based abuse provisions, online trolls face penalties of up to $111,000 each time they post an intimate image of a person without consent. From January, websites and social media companies will have 24 hours, down from 48 hours, to comply with take-down notices.

While the images are typically sexually explicit, the laws also capture some cases in which a person is not wearing the religious or cultural clothing they would normally wear in public, such as the hijab.

Ms Inman Grant said her office, including a team of about 40 investigators, handled 2687 complaints about the non-consensual sharing of intimate images and videos in the last financial year.

“Every single site we’ve ever dealt with is based overseas,” she said, and they had an 85 per cent success rate in getting the content removed.

Complaints are lodged on the eSafety website, and the regulator can act if the complainant or the perpetrator lives in Australia. Threats to post intimate images are also covered.

Her office worked collaboratively first wherever possible to have image-based abuse removed by platforms, rather than issuing formal take-down notices, “because that’s the most expeditious way to get content down”.

“We’ve certainly seen this in terms of youth-based cyber bullying. We’ve had one very serious fight video targeting a vulnerable child taken down from Instagram in as little as 12 minutes,” she said.

Penalties of up to $555,000 apply to companies that fail to comply with a take-down notice, but she had yet to see a mainstream company fail to respond.

As to whether the perpetrator is also pursued, including in court for a $111,000 civil penalty order, Ms Inman Grant said that was decided on a case-by-case basis and “it also depends on what the complainant wants”.

Her office could also issue formal or informal notices to cease and desist, requiring a perpetrator to apologise, remove posts and delete all images of the complainant in their possession.

“We have to be fair, we have to be proportionate in terms of how we use these powers. But we won’t hesitate to use them if we need to.”