Trump is not alone in criticising the WHO over coronavirus. Here’s why

Washington: US President Donald Trump unleashed a tirade against the World Health Organisation on Tuesday, accusing it of acting too slowly to sound the alarm about the coronavirus. It was not the first time in this pandemic that the global health body has faced such criticism. 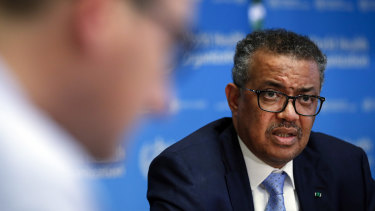 Government officials, health experts and analysts have in recent weeks raised concerns about how the organisation has responded to the outbreak.

In Japan, Taro Aso, the deputy prime minister and finance minister, recently noted that some people have started referring to the World Health Organisation as the "Chinese Health Organisation" because of what he described as its close ties to Beijing.

Taiwanese officials say the WHO ignored its early warnings about the virus because China refuses to allow Taiwan, a self-governing island it claims as its territory, to become a member.

Critics say the WHO has been too trusting of the Chinese government, which initially tried to conceal the outbreak in Wuhan. Others have faulted the organisation and its leader, Dr. Tedros Adhanom Ghebreyesus, for moving too slowly in declaring a global health emergency.

The WHO, a U.N. agency, has defended its response, saying on Wednesday that it alerted the world to the threat posed by the virus in a timely manner and that it was "committed to ensuring all member states are able to respond effectively to this pandemic."

The agency's defenders say that its powers over any individual government are limited, and that it has done the best it can in dealing with a public health threat with few precedents in history.

There will be time later to assess successes and failings, "this virus and its shattering consequences," the United Nations secretary-general, António Guterres, said Wednesday in a statement praising the WHO as "absolutely critical" to vanquishing COVID-19.

Here's why the WHO is coming under attack.

The WHO has not pushed China on early missteps

When cases of a mysterious viral pneumonia first appeared in Wuhan in December, Chinese health officials silenced whistleblowers and repeatedly played down the severity of the outbreak.

Even as late as mid-January, as the virus spread beyond China's borders, Chinese officials described it as "preventable and controllable" and said there was no evidence it could be transmitted between humans on a broad scale.

The WHO endorsed the government's claims, saying in mid-January, for example, that human-to-human transmission had not been proved.