Princeton, New Jersey: US President Donald Trump will meet with the Republican leaders of the Michigan state legislature on Friday, US time, at the White House, as his campaign pursues an increasingly desperate bid to overturn the November 3 election amid a series of courtroom losses.

Meanwhile, President-elect Joe Biden is scheduled to meet with the Democratic leaders in Congress, House of Representatives Speaker Nancy Pelosi and Senate Minority Leader Chuck Schumer, after spending most of the week huddled with advisers as he plans his administration. 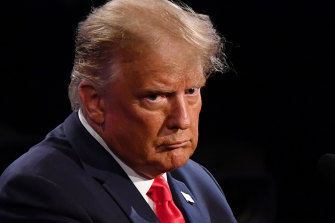 US President Donald Trump appears to be growing desperate to find a way to overturn the election result.Credit:Bloomberg

The Trump campaign's latest strategy, as described by three people familiar with the plan, is to convince Republican-controlled legislatures in battleground states that Biden won, such as Michigan and Pennsylvania, to undermine the election results and deliver those states to the Republican president's corner.

Trump's attempts to reverse the outcome via lawsuits and recounts have met with little success. A hand recount of Georgia’s roughly 5 million votes wrapped up on Friday AEDT, affirming Biden’s victory there, while judges in three states rejected bids by the campaign to challenge vote counts.

Biden is now projected to have secured 306 votes to Trump's 232 in the state-by-state Electoral College that determines the winner. Each state's electoral votes, which are largely based on population, are typically awarded to the winner of the state's popular vote, which are cast in December in what is usually a formality.

A senior Trump campaign official said the idea is to sow doubt about the results in certain states while pressing Republican lawmakers to intervene by appointing their own Trump-supporting electors.

Legal experts have sounded the alarm at the notion of a sitting president seeking to undermine the will of the voters, though they have expressed scepticism that a state legislature could lawfully substitute its own electors.

Michigan's state legislative leaders, Senate Majority Leader Mike Shirkey and House Speaker Lee Chatfield, both Republicans, will visit the White House at Trump’s request, according to a source in Michigan.

The two lawmakers would listen to what the President has to say, the source said. Shirkey told a Michigan news outlet earlier this week that the legislature would not appoint a second slate of electors.

Trump separately reached out to a local election official in Wayne County, where Detroit is located, after she questioned whether to certify the results there.

His outreach to state officials represents a shift for his re-election campaign, which has been unable to muster evidence to support the President's unfounded claims of widespread voter fraud. Election officials have said they saw no evidence of any major irregularities.

Biden called Trump's attempts "totally irresponsible" on Thursday, though he has expressed little concern they would succeed in preventing him from taking office on January 20.

Biden spent the week putting together his team. His incoming chief of staff, Ron Klain, told CNN Biden would announce more White House officials on Friday, after naming several senior staff members earlier this week. Biden said earlier he had selected a treasury secretary and could announce his pick as soon as next week.

Despite the setbacks, the Trump campaign has not abandoned its legal efforts to overturn the election results.

Rudy Giuliani, the President’s personal lawyer, told a news conference on Friday AEDT, he planned to file more lawsuits, accusing Democrats of masterminding a "national conspiracy" to steal the election while offering no evidence to support the claim.

In a statement late, campaign legal adviser Jenna Ellis dismissed the Georgia recount as simply a second tally of "the illegal ballots" included in the original count and said the campaign would pursue "all legal options".