"I have accepted the resignation of Scott Pruitt as the administrator of the Environmental Protection Agency," Trump said in a tweet. "Within the agency Scott has done an outstanding job, and I will always be thankful to him for this."

"I have no doubt that Andy will continue on with our great and lasting EPA agenda," Trump wrote. "We have made tremendous progress and the future of the EPA is very bright!"

The departure of the anti-regulatory crusader ends a bizarre and tumultuous chapter of the Trump administration that puzzled even some of the President's staunchest supporters. 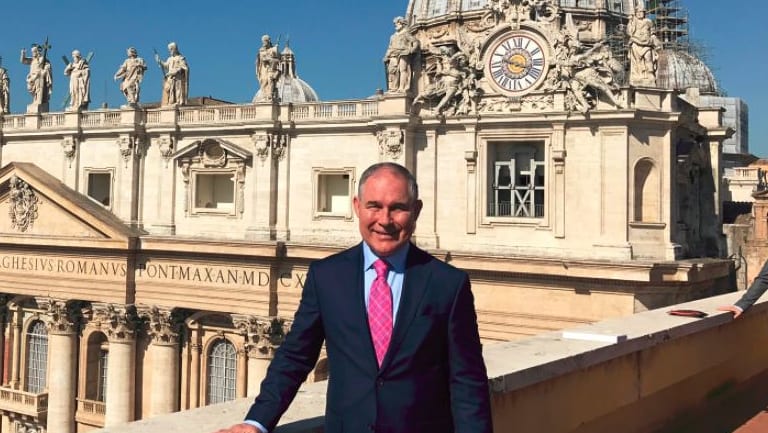 The spendthrift EPA chief has been a political liability for the White House for months, drawing the attention of federal investigators with scandal after scandal, many of which were linked to his lavish spending of taxpayer money and the use of his position to enrich his family. Pruitt leaves the post the target of more than a dozen official probes.

The transgressions span from Pruitt's deal with the wife of a top energy lobbyist for deeply discounted housing, huge raises he gave friends against the instructions of the White House and his penchant for flying first class. Pruitt used his office to try to secure his wife a Chick-fil-A franchise and also enlisted aides to try to help her land lucrative work elsewhere. He had a $US43,000 ($58,000) phone booth installed in his office.

Though Trump initially backed Pruitt and prominent conservatives had lobbied to keep him in place, the scandals eventually made Pruitt too much of a liability for the administration. 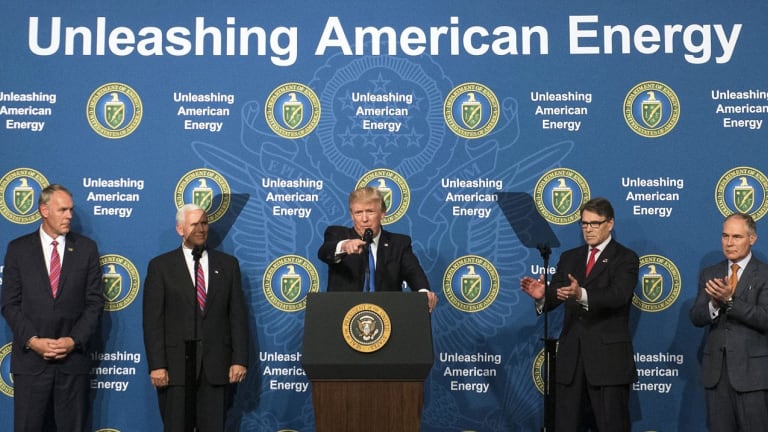 US President Donald Trump, centre, with Scott Pruitt, far right, has sought to turn the focus away from fighting climate change and toward American “energy dominance”.

Pruitt has been seen by conservatives as among Trump's most effective Cabinet members, aggressively dismantling clean water and air rules, working from the inside to weaken the agency's authority and rolling back the Obama-era climate action loathed by fossil fuel companies.

The latest Cabinet shuffle reflects a remarkable turnabout for Pruitt, once a rising GOP star. The EPA position was seen by Pruitt's allies as a launch pad for bigger ambitions, such as a run for the Senate or Oklahoma governorship, and possibly even the presidency.

But that political future has been thrown into doubt amid investigations into behaviour the White House was unwilling to defend, such as the unauthorised purchase of the sound-proof phone booth meant to deter eavesdroppers.

In his short time at the EPA, Pruitt managed to do more to undermine the environmental protection work … than any leader of the agency.

The departure is a blow to anti-regulatory activists eager to see the rules of the Obama era scrapped. Several of the battles Pruitt launched against regulations, such as the aggressive fuel economy standards championed by California and the federal Clean Power Plan aimed at reducing electricity plant emissions, are likely to endure for years. The Trump administration already was sprinting to get the rules rewritten and through court challenges before the next presidential election.

The personnel shake-up could slow that work and give environmental groups and the coalition of states fighting Pruitt's agenda an advantage.

Still, in his short time at the EPA, Pruitt managed to do more to undermine the environmental protection work of its career scientists, analysts and enforcement officers than any leader of the agency since the early days of the Reagan administration. And the appointment of former coal industry lobbyist Wheeler as acting head ensures the Pruitt agenda will endure. Former agency chiefs – including some who served GOP presidents – expressed alarm at Pruitt's climate denialism and his hostility toward many bedrock environmental rules.

Pruitt often was unabashedly at war with his own agency, alleging it was under the control of activist bureaucrats working in tandem with environmental groups to impose a radical agenda. When his ethics problems became insurmountable, he blamed his troubles on those same forces, accusing them of manufacturing controversy to thwart his deregulation push.

But concern about Pruitt's ethics issues ultimately reached the White House, where Trump advisers worried his spending habits and management undermined Trump's vow to "drain the swamp" of government waste and corruption. Iowa Republican Senator Joni Ernst, a Trump ally, said in June that Pruitt "is about as swampy as you get."

The housing arrangement, which Pruitt likened to "an Airbnb situation," allowed him to stay in a condo a block from the Capitol for $US50 a night, paying only for nights he was in town – far below market rates for such a room.

Pruitt also helped two of his confidants secure giant pay raises against White House instructions. After getting turned down by the White House, the EPA granted the raises by invoking a provision of the Safe Drinking Water Act that allowed Pruitt to make up to 30 hires without White House or congressional approval. The salary of one of the aides was boosted to $US164,200 from $US107,435. The other saw a salary increase from $US86,460 to $US114,590.

As the housing and salary hike controversies emerged, Pruitt already was battling fallout from his tendency to fly first class for government travel, and also arranging his taxpayer-funded trips so he could spend weekends at his home in Oklahoma. Pruitt said security concerns demanded he fly in the luxury cabin, but it was a clear departure from the practice of past EPA leaders. A member of his security detail said flying in coach exposed him to angry members of the public.

Reports that Pruitt sidelined EPA staffers who objected to his requests for special treatment didn't help his case. The Pruitt requests that caused staff to bristle, according to The New York Times, included the blaring of government vehicle sirens to cut through traffic on routine trips, his first-class plane trips and a security detail three times the size of that of his predecessors. There also was a request for a bulletproof vehicle with tires resistant to gunfire. 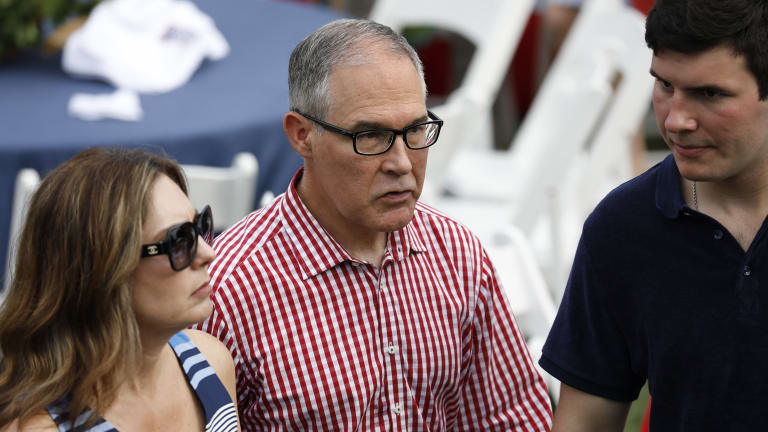 Scott Pruitt, centre, and his wife Marlyn Pruitt, left, attend a picnic for military families in Washington on Wednesday.

As Pruitt struggled to explain it all, more scandals kept emerging. Emails obtained by the Sierra Club revealed how Pruitt had his staff schedule a meeting with the CEO of Chick-fil-A, with the goal of landing his wife a franchise. Reports emerged that he tasked them with such things as acquiring a used mattress from a Trump hotel, tracking down the luxury skin lotion he prefers and using their personal credit cards to cover his hotel bills.

By July, it was clear that even some of Pruitt's most loyal aides would no longer protect him. They detailed for congressional investigators more of the agency chief's questionable conduct, including tasking aides with finding his wife a job. The White House communications staff had long since stopped defending Pruitt, and so had many conservatives.

Yet Trump continued tweeting his praise. Now, it seems, even the President has had enough of the turmoil Pruitt added to his administration.