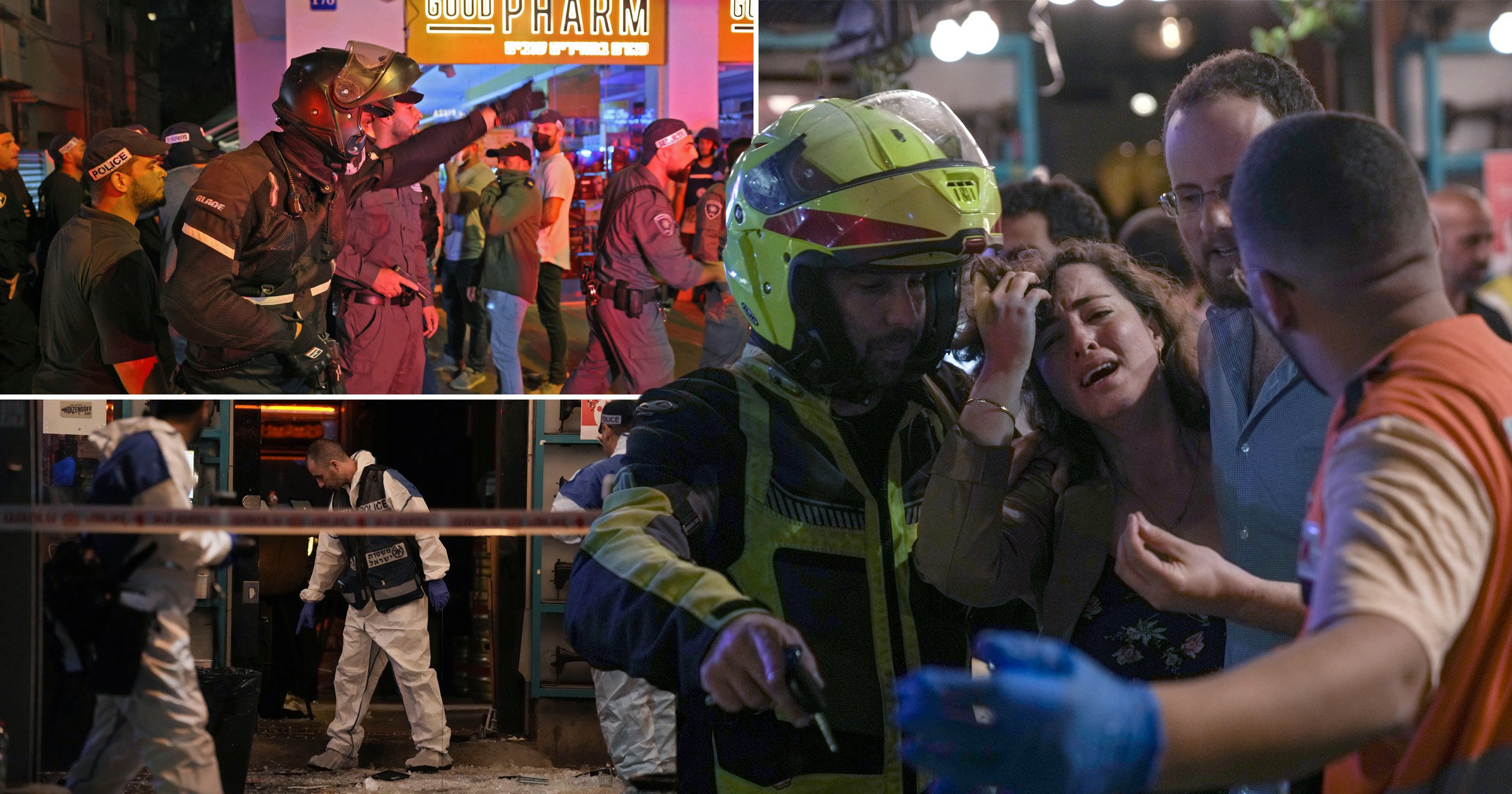 Two people have been killed after at least one gunman opened fire in a crowded bar and restaurant district in Tel Aviv.

Four people are fighting for their lives in the wake of the attack on Dizengoff Street, while four others were wounded.

Locals have been told to lock their doors tonight as the assailant remains on the loose.

Armed police flooded the area and were seen with guns drawn outside a building where a suspect was rumoured to be inside. An explosion of some kind was heard moments before.

The motive for the shooting is not immediately clear, but it comes amid heightened tensions following a series of deadly attacks carried out by Palestinians.

Eleven people were killed just ahead of the holy Islamic month of Ramadan, which began nearly a week ago.

Horror scenes are believed to have unfolded tonight when one or more gunmen approached Ilka, a popular bar with an outside seating section.

Speaking to The Times of Israel, diner Evelyn Gertz, 34, said: ’We dove under the tables and people started crying, it was horrible.’

Prime Minister Naftali Bennett is monitoring the situation from the Israeli military headquarters.

Dizengoff Street has been the scene of several violent incidents over the years.  Most recently, an Arab citizen of Israel shot and killed two Israelis and wounded several others on the street in January 2016.

Officials have made efforts to calm the unease, holding a flurry of meetings over the past few weeks.

Israel has announced thousands of additional work permits will be issued for Palestinians from the Gaza Strip.

Women, children and men over 40 from the occupied West Bank have also been invited to pray at the Al-Aqsa Mosque in east Jerusalem on Friday, the first weekly prayers of Ramadan.

Tens of thousands are expected to attend the third holiest site in Islam, which has been a frequent flashpoint for violence over the years.

Israel captured east Jerusalem, the West Bank and the Gaza Strip in the 1967 Mideast war. The Palestinians want all three territories to form their future state.

The last serious and substantive peace talks broke down more than a decade ago, and Israeli Prime Minister Naftali Bennett is opposed to Palestinian statehood.

Israel annexed east Jerusalem in a move not recognised internationally and considers the entire city to be its capital.

It withdrew soldiers and settlers from Gaza in 2005, but along with neighbouring Egypt it imposed a crippling blockade on the territory after the militant Hamas group seized power from rival Palestinian forces two years later. Israel and Hamas have fought four wars since then.