England today announced one more Covid-19 death in hospitals — but no new fatalities were recorded in the preliminary toll for Scotland, Wales or Northern Ireland.

Health officials have yet to confirm the final daily death toll, which includes victims in all settings in England and not just patients who have succumbed to the virus in NHS-ran hospitals.

NHS England said the unidentified victim, who was in their 80s, was being treated at a hospital in Bradford and died yesterday, Sunday, September 13.

Five coronavirus deaths were confirmed yesterday as well as three last Monday. Eleven patients are dying each day, on average — down from the 1,000 fatalities recorded daily during the worst of the crisis in April.

Government figures show deaths have yet to spike in line with soaring cases, which have doubled in the space of ten days. But it can take patients several weeks to succumb to the illness, meaning deaths may not start to trickle through for another fortnight.

More than 3,000 new cases are now being recorded each day, on average. But top experts insist the UK does not yet need to panic over the rising numbers because they are only a fraction of the 100,000-plus that occurred each day during the darkest period of the coronavirus crisis.

Other scientists, however, say action is needed to prevent Britain being hit by another wave of the disease. Around 40,000 deaths were recorded in the UK during the first bout of pandemic. 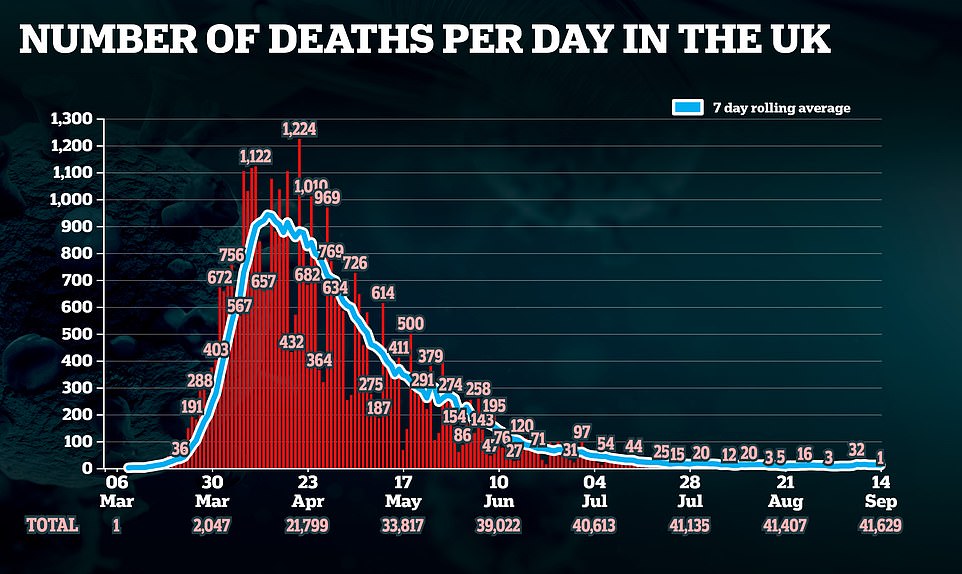 Britain’s coronavirus response is being led by a ‘Dad’s Army’ of well-paid people with no experience, two leading scientists have said as they called on Number 10 to stop panicking and scrap the controversial ‘rule of six’.

Professors Carl Heneghan and Tom Jefferson, from Oxford University, accused Boris Johnson of making a series of ‘catastrophic’ errors since returning to work in April, following his own battle with the killer virus.

They said the country’s pandemic response has suffered because it has been led by Government officials inexperienced in controlling public health.

Health Secretary Matt Hancock, they pointed out, has had the job for only two years; chief medical officer Professor Chris Whitty was appointed in 2019; Boris Johnson was elected last year; and the Joint Biosecurity Centre – created to fight the Covid-19 pandemic – is run by a spy.

Professor Heneghan and Professor Jefferson warned the government’s new move to limit gatherings – which came into force today – was ‘disturbing’ and had ‘no scientific evidence to back it up’. They argued that it may instead end up having ‘major consequences’.

And in urging ministers to carry on with life because containing the spread of Covid-19 is ‘unrealistic’, they warned the ‘roll of the dice’ to crack down on large gatherings may tip the public over the edge and said it should be ‘binned’.

Gatherings of more than six people have been made illegal in a bid to stem a surge in coronavirus cases, which experts have warned is on the verge of spiralling out of control. Under-12s are exempt from the rules in Wales and Scotland.

It comes as ministers today urged people to snitch on their neighbours if they are flouting the new ‘Rule of Six’ coronavirus policy as the country teeters on the brink of another disastrous lockdown.

Policing minister Kit Malthouse said rule-breakers should be flagged to the authorities, as the draconian measures opened up deep splits between ministers and experts.

The drastic intervention came as Home Secretary Priti Patel warned that people face criminal records as well as thousands of pounds in fines if they refuse to abide by the law.

Meanwhile, the government’s response to the spike in infections has been slammed by top scientists as panicky and not based on evidence, with jibes that those in charge are a ‘Dad’s Army’ with no experience.

But other experts have delivered chilling warnings that the outbreak is on the verge of spiralling out of control, after the daily case rate topped 3,000 for the first time in months.

Boris Johnson sent shockwaves through nation last week when he announced the restrictions, the first widespread tightening of lockdown since March.

The rules are now in force in England after a sunny weekend when many people enjoyed a final meet up before the misery descended.

Gatherings of more than six people have been made illegal in a bid to stem a surge in coronavirus cases. It has sparked fury that many larger households can no longer meet up with anyone else.

However, the rules in England are tougher than in Wales and Scotland, where under-12s are being exempted from the crackdown.

Britons are now waiting with bated breath to see whether the action can bring infections back down, with around 3,000 new cases being recorded each day, on average.

For comparison, just 546 new coronavirus infections were recorded during the start of July, when cases dropped to a five-month low. They have continued to creep up ever since.

France and Spain in particular have seen huge rises, but Belgium – which imposed a similar crackdown – appears to have the situation more under control.

There are fears that failure will mean worse curbs in the run-up to Christmas, with a 10pm curfew for pubs being considered amid alarm that young people are ‘forgetting’ Covid regulations. 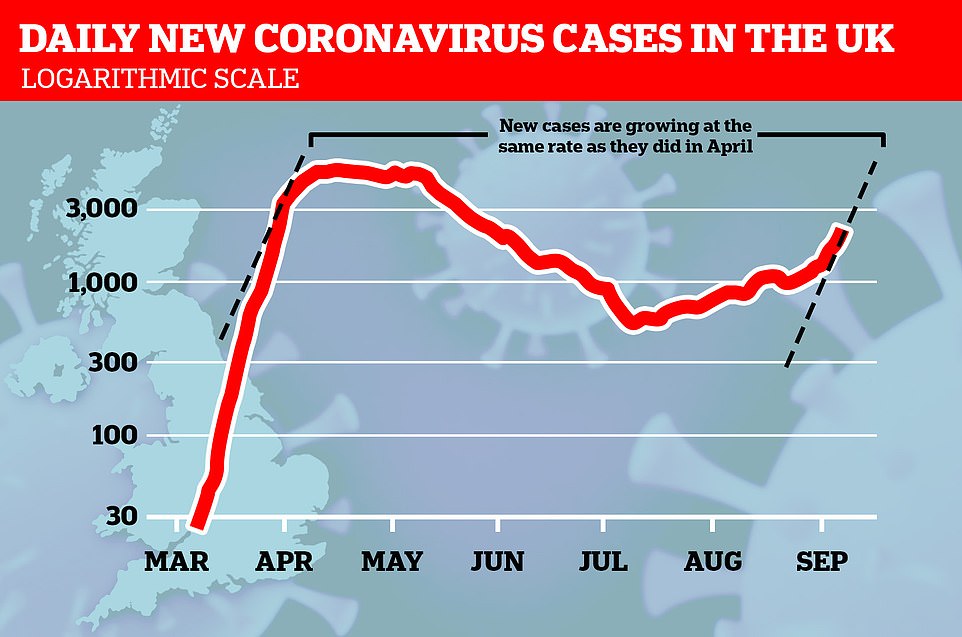 A graph showing the proportional change in the numbers of new cases of Covid-19 in Britain suggest they are now rising at a similar rate to what was seen in April, a fortnight or so after lockdown started