UK 'could offer 3.7m Covid vaccines to Ireland after Easter'

UK ‘could offer 3.7m Covid vaccines to Ireland after Easter’ in ‘poke in the eye’ to EU over rollout shambles – but Culture Secretary Oliver Dowden says covering Britons is still ‘priority’

The UK could send millions of coronavirus vaccines to Ireland after Easter in a ‘poke in the eye’ to the EU, it was claimed today.

Some 3.7million doses could be handed to the Republic amid concerns that its slow rollout could prevent lockdown being eased in Northern Ireland.

Cabinet ministers are said to view the move as ‘good politics’ as well as solving a ‘genuine’ issue about the gulf in vaccination rates on the island.

However, Culture Secretary Oliver Dowden insisted this morning that covering Britons remains the ‘priority’ – saying ‘currently doesn’t have a surplus’.

The UK’s beating jabs rollout is expected to move up another gear next month when the Moderna jab is deployed for the first time.

The imminent arrival of more than 500,000 doses of the new US vaccine – to add to millions of Pfizer and Oxford-AstraZeneca shots – will herald the expansion of the programme to the under-50s.

Doctors are expected to administer the first Moderna jabs within three weeks. 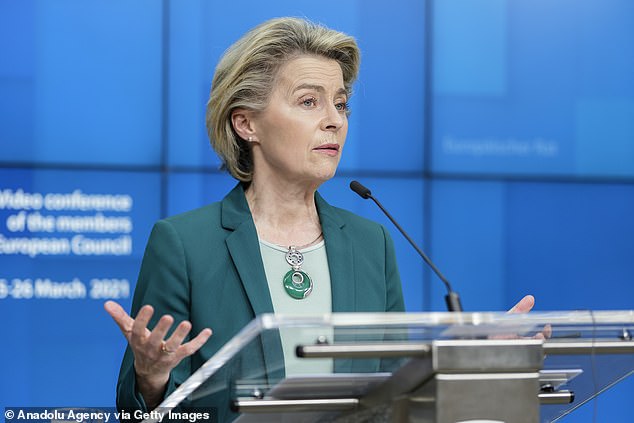 Moderna, which was codenamed ‘Renown’ by the Government during the American company’s development process, is being manufactured by the Swiss-based Lonza biotech company

The Moderna jab is, like the Pfizer vaccine, based on mRNA technology which involves injecting synthetic fragments of genetic code that instruct human cells to build the distinctive ‘spike’ protein found on coronavirus particles.

These new spike proteins cannot cause infection, but their presence enables the immune system to recognise Sars-Cov-2 coronavirus particles as dangerous invaders – and so attack any they come across.

Moderna is a fledgling American company and the vaccine is its first approved product. In the US, 64.3 million doses have been given.

Like the Pfizer jab, it must be kept at sub-zero temperatures during transportation and storage, but only at minus 20C rather than minus 70C for Pfizer.

The Government has ordered 17 million doses, and the EU has 310 million, with an option for another 150 million in 2022.

A Cabinet source told the Sunday Times: ‘Everyone can see the logic of it. It’s good politics while at the same time solving a genuine public health concern in Northern Ireland.

‘It is a balancing act, making sure that we have enough vaccines to give the UK’s adult population the second dose.

‘Easter will be when we might be able to start offering vaccines to Ireland.’

The Cabinet Office is also reportedly drawing up plans to send surplus vaccines to other EU countries, with anxiety that the shambolic rollout in France and Germany could boost extremist forces.

‘The fear is that Macron has made such a mess of things that it might mean we end up with Marine Le Pen getting elected,’ a Whitehall source told the paper. ‘No one wants that.’

Mr Dowden refused to confirm the claims that 3.7million doses have been tentatively earmarked for Ireland. It would be the first time the UK has exported jabs to the EU.

He said: ‘Clearly, our first priority is ensuring we deliver vaccines in the United Kingdom.

The news came as a buoyant Boris Johnson hailed the relaxation of lockdown rules starting tomorrow, ‘Happy Monday’, when gatherings of up to six people or two full households will be allowed in parks or in back gardens and golf, tennis and team sports can resume.

Weddings will no longer be limited to ‘exceptional circumstances’ and the ‘stay at home’ message is being scrapped.

However the foreign travel ban is being kept in place with a new maximum £5,000 fine for those travelling without good reason.

The relaxation of the domestic rules is forecast to coincide with a spring heatwave, with temperatures expected to hit 73F (23C) by Tuesday.

The Prime Minister said: ‘As things stand, I can see absolutely nothing in the data to dissuade me from continuing along our roadmap to freedom, unlocking our economy and getting back to the life we love.’

Looking forward to April 12, when hairdressers and barbers should reopen, Mr Johnson added: ‘In just a few days’ time, I’m finally going to be able to go to the barber’s.

‘But more important than that, I’m going to be able to go down the street and cautiously, but irreversibly, I’m going to drink a pint of beer in the pub.’

Moderna, which was codenamed ‘Renown’ by the Government during the American company’s development process, is being manufactured by the Swiss-based Lonza biotech company.

Trials found that it was 94.1 per cent effective at preventing symptomatic infection after the second dose.

Nearly 30million vaccine first doses have now been administered in the UK. By yesterday, the total had reached 29,727,435, or 56.4 per cent of all UK adults.

A total of 411,305 first doses of the vaccine were given on Friday, while 283,654 second jabs were given, more than double the number administered seven days earlier.

Hospital admissions, at 363, were down 21 per cent over the past seven days, while deaths, at 58, represented the lowest Saturday toll for six months.

The news came as a buoyant Boris Johnson hailed the relaxation of lockdown rules starting tomorrow, ‘Happy Monday’, when gatherings of up to six people or two full households will be allowed in parks or in back gardens and golf, tennis and team sports can resume

Mr Johnson told the Conservatives’ virtual spring conference yesterday that he recognised that a third wave of coronavirus is being witnessed in parts of Europe and ‘bitter experience’ had taught him that this could hit the UK shortly afterwards.

He said: ‘I think the second half of the year will have the potential to be really fantastic.

‘But it depends on things still going right. We depend on the successful vaccine programme and disease not taking off again. The question is, is it going to be, this time, as bad it has been in the past? Or have we sufficiently mitigated, muffled [and] blunted impact by the vaccine rollout? That’s a question we still don’t really know the answer to.’

He has also said Britain is set to be a ‘global powerhouse’ of vaccine production, and combatted fears that Brussels could block supplies by revealing that Britain could already make 80 per cent of the AstraZeneca jabs we need here.

In a private briefing to MPs last week, he said that by next year Britain will have the capacity to make 140 million vaccine doses a year at a new site in Oxford, a further 140 million in Braintree, Essex, and 200 million a year in Livingston in Scotland.

Mr Zahawi said: ‘It was a deliberate decision of the Prime Minister to build production capacity. It means we’re on course to become one of the world’s global powerhouses for vaccines, both to help everyone in the UK and to work with other countries.’