The UK must ‘adapt or die’ as flooding and droughts become more frequent due to climate change, the Environment Agency has warned.

Deadly events such as this summer’s flooding in Germany will hit here if our country does not make itself resilient to the more violent weather the eco-emergency is bringing, said the organisation’s chairman Emma Howard Boyd.

In her speech, made ahead of the UN’s Cop26 climate summit in Glasgow, she stated that flood barriers or reducing water use are just as important as lowering our greenhouse gas emissions. 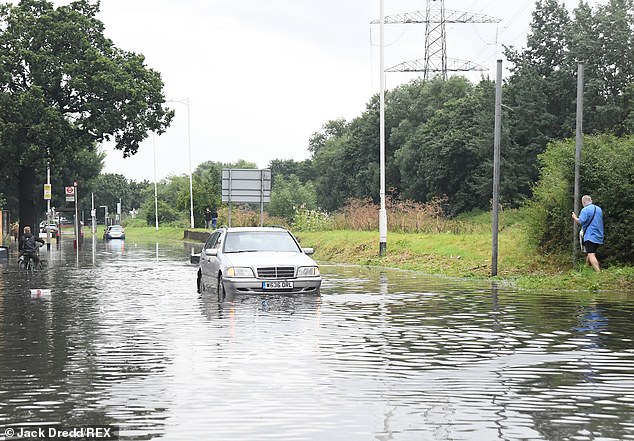 looding in Chigwell after thunderstorms struck London in July

She also warned that adaptation to climate change was being neglected by most of the world, with the focus on reducing emissions.

In a report to Parliament on how Britain will adapt to the problem, the EA said water supplies – which are already challenged by pollution – would come under greater pressure, and make it harder to ensure clean and plentiful water.

Traditional flood defences will not be able to prevent all flooding and coastal erosion.

The natural world cannot adapt as fast as the climate is changing, the EA said.

If no further action is taken between 2025 and 2050, more than 3.4billion extra litres of water a day will be needed for public supplies.

With 2C global warming – below the level for which the world is currently on track – England’s winter rainfall will increase by 6 per cent by the 2050s, with summer rainfall down 15 per cent.

Miss Howard Boyd said: ‘The climate crisis is global, but its impacts are in your village, your shop, your home.

‘It is adapt or die. With the right approach we can be safer and more prosperous. So let’s prepare, act and survive.’

The warnings come in the EA’s third adaptation report, submitted to the Government under the Climate Change Act.

‘Heartbreaking’: Family home of 34 years is hit by floods amid torrential rain as they enjoyed their post-coronavirus reunion 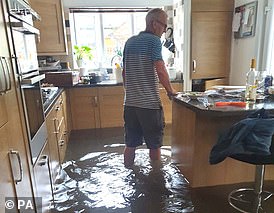 A family’s home was flooded after heavy rain in London

A woman whose childhood home was flooded during the family’s first get-together in 18 months has described the experience as ‘heartbreaking’ for her parents.

Nicola Thorogood, 33, was at her parents’ house in Walthamstow, east London, along with her two sisters, their partners and all their children when torrential rain hit the area in July.

The family made a frantic attempt to keep the water out of the home they moved into in 1987, but in the end they gave up and put their efforts into trying to save as many belongings as possible.

‘It’s just knowing what they’ve put into it – they’re in their mid-60s now, but they’re still working – and they’ve worked so hard all their life to have that house and it’s the thing they’re most proud of and want to pass on to us eventually. It’s that that breaks my heart.’

The house is about a 10-minute walk from Whipps Cross Hospital, which declared a major incident on Sunday.

During the flooding in July, Ms Thorogood’s family were all together for the first time since January 2020 after so-called Freedom Day.

Her older sister left with her children shortly after 3pm as the weather started to worsen, and soon after the rest of the family were using buckets to try to sweep water away from the front step, and build makeshift flood defences using bin bags and soil.

When it became clear they could not stop the water, they instead tried to save as many belongings as they could.

Ms Thorogood said: ‘We took what we could upstairs, obviously anything like sentimental photos and things like that. Then we retreated upstairs to my parents’ room and just watched the rain fall and the flood come in.’

‘My mum was close to tears,’ Ms Thorogood said. ‘She kept saying, ‘nobody’s hurt’ and ‘there’s worse things could happen’ but you could see the pain on her face.

By Monday morning the water had receded and her parents were beginning to clean up.

‘They stayed because mum just didn’t want to leave,’ Ms Thorogood, who lives in Chingford, said.

‘I spoke to her this morning and she said the water’s gone, but it’s like a warzone, and they don’t know where to start.

‘I’m hoping she’ll come and stay here for a few days… they can’t stay there, at the moment they have no power, they don’t know if it’s safe to put it back on.