Ministers are facing growing calls to make Covid testing cheaper for holidaymakers after research showed costs in Britain are double those in Europe.

‘Gold-standard’ PCR tests – so-called because they are reliable though take longer to deliver a result – cost about £128 on average in the UK, the study found.

On the Continent, the average bill across eight of the most popular holiday destinations was only £62.

The findings have renewed calls for returning travellers to be allowed to take cheaper rapid tests – which are now available for free under a new government scheme to test all adults twice a week.

Under Boris Johnson’s ‘traffic light’ system for re-starting foreign travel, it is expected returning holidaymakers will be required to take PCR tests – a move that risks pricing families out of a summer break. 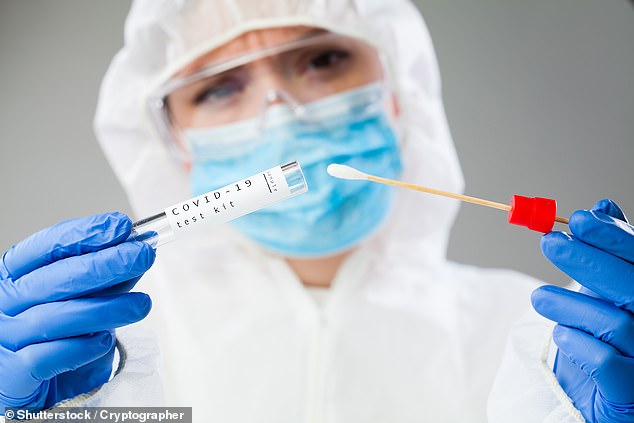 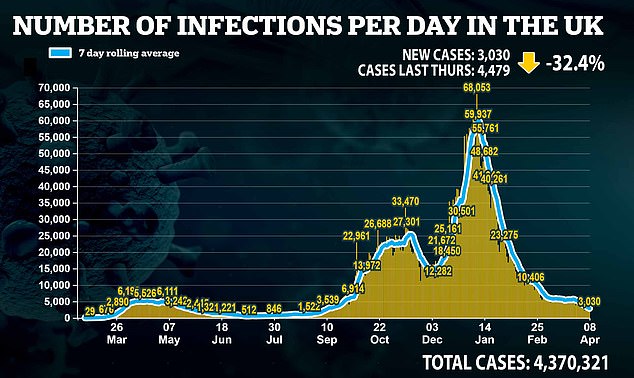 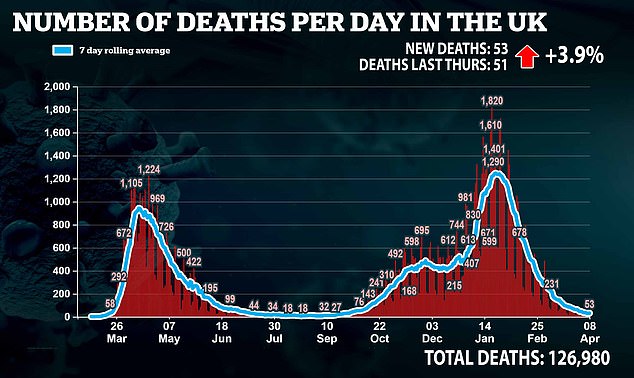 Health chiefs announced another 53 deaths, which was two more than the same time last week

Tory MP Henry Smith, chairman of the cross-party Future of Aviation group of MPs, said: ‘The sky-high cost of PCR tests runs the risk of being a major disincentive to travel for many and the Government must ensure that these costs are kept as low as possible … We should be looking to less expensive and burdensome tests which are now the standard and accepted test in every other part of society.’

Karen Dee, chief executive of the Airport Operators Association, said the Government should also work to reduce, if not eliminate, the cost for pre-departure tests that will be required by many popular destinations, such as Greece.

She added: ‘Without a cost-effective solution like this, a summer holiday will be out of reach for many.’

The study by the AOA and ABTA – The Travel Association, calculated the average cost of a PCR test in Germany, the Netherlands, France, Belgium, Spain, Portugal, Italy and Greece.

In France, travellers can get free, government-subsidised PCR tests at some airports if they show their plane ticket.

Currently, all arrivals into the UK must book a two-test PCR package before travel, which costs £210 per person via the Government’s provider, Corporate Travel Management.

By comparison, lateral flow tests offer results in minutes and cost as little as £12 each, though they are less reliable.

Last night the Government suggested it was open to accepting the cheaper tests.

The Department for Transport said: ‘We will work with the travel industry and private testing providers to see how we can further reduce the cost of travel for the British public while ensuring travel is as safe as possible.

‘This could include cheaper tests being used when holidaymakers return home, as well as whether the Government would be able to provide pre-departure tests.’