Ukraine's sniffer dog hero who has detected over 200 Russian mines

A day in the war zone with Patron: Ukraine’s pint-sized sniffer dog hero who has detected more than 200 deadly Russian landmines and was the only one who didn’t duck when a shell exploded nearby

As the Russian shells explode, everyone takes cover – apart from Patron, who doesn’t even flinch.

But then Patron is a national hero, recently awarded a medal for valour by Ukrainian President Volodymyr Zelensky, has 250,000 Instagram followers and is the star of billboards symbolising his country’s defiance of Vladimir Putin. 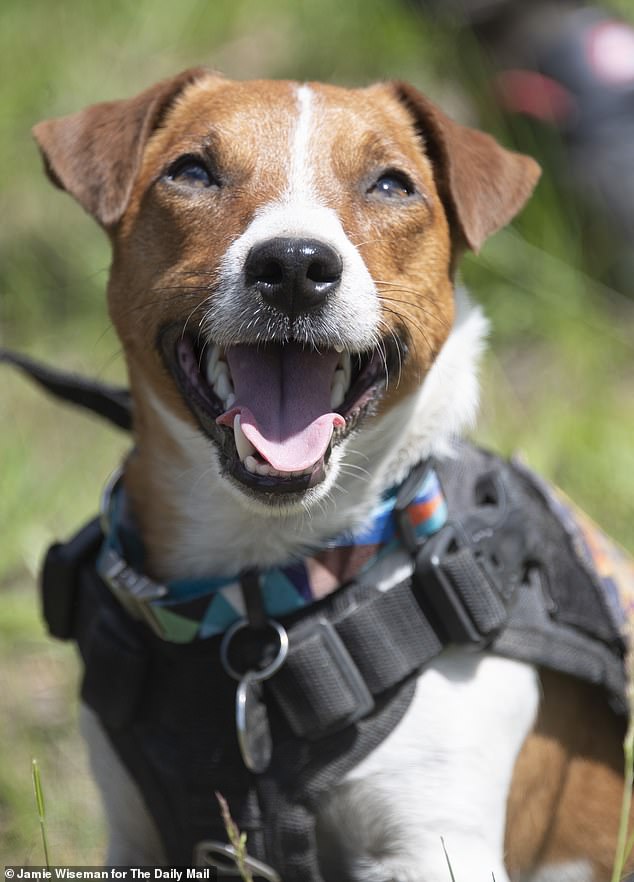 He is also a Jack Russell originally bought to appear in pedigree dog shows, but who has detected more than 200 deadly Russian landmines and unexploded bombs.

Wagging his tail, Patron – whose name translates to Bullet in English – earns his reward of a piece of cheese from his owner and handler Mykhailo Iliev. He has to be careful with the treats. Patron weighs 4kg, handily less than the 5kg that sets off most Russian munitions.

The two-year-old pet found fame when Ukraine’s State Emergency Service posted a video online of their mascot working in the war-torn northern city of Chernihiv. He received his medal at the presidential palace in Kyiv with Canadian Prime Minister Justin Trudeau, who was visiting, looking on.

As we travel to the landmine- strewn forests around Chernihiv, troops and police officers at checkpoints cheer Patron and pose for selfies. ‘He gets a lot more tired now because of all the attention,’ says Mykhailo. ‘But it’s good to keep up the guys’ morale.’ 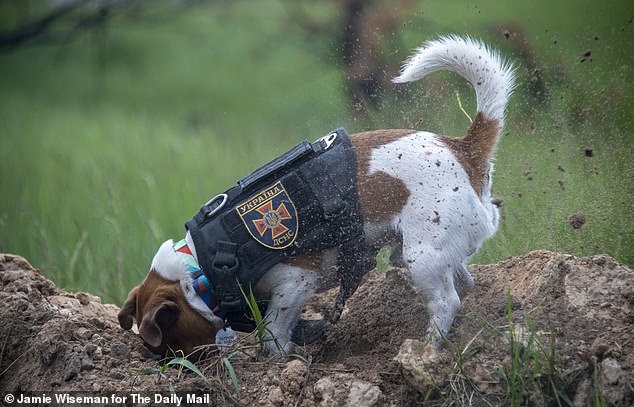 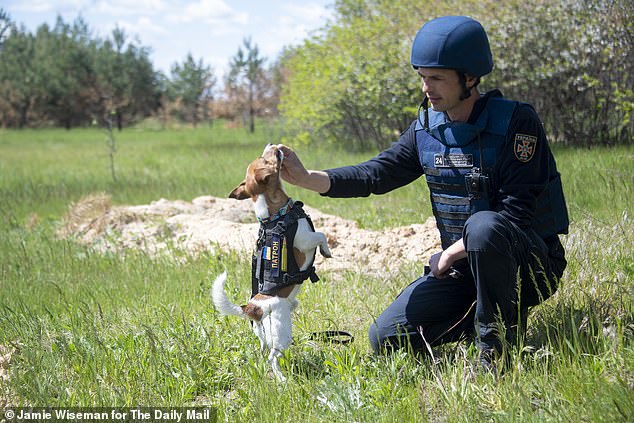 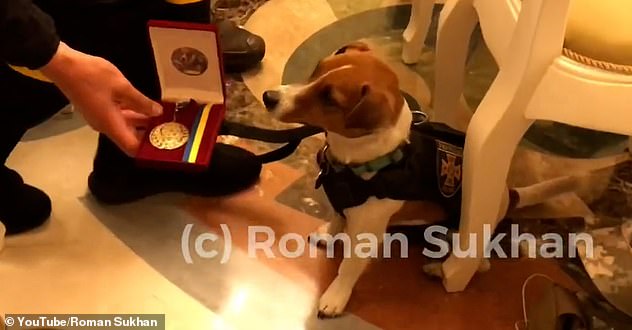 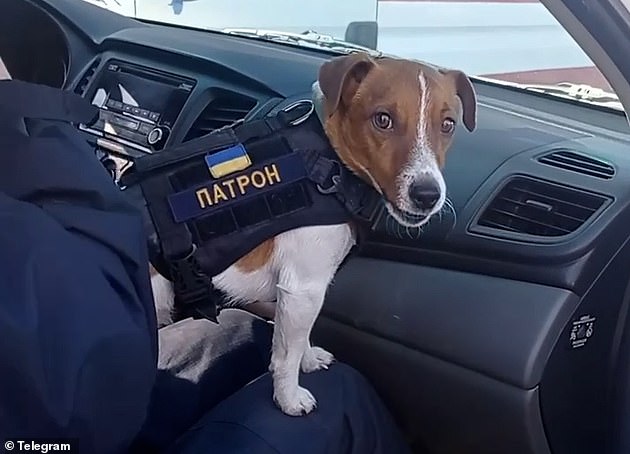 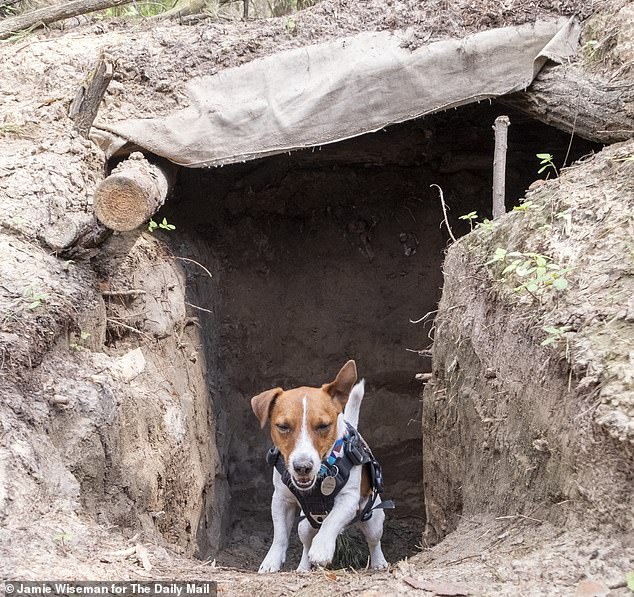 After buying Patron, Mykhailo soon realised the dog could help his work as a bomb disposal expert.

‘My wife is also in the services and there was no one at home to look after him, so I have taken him to work with me every day since he was two months old,’ he says. 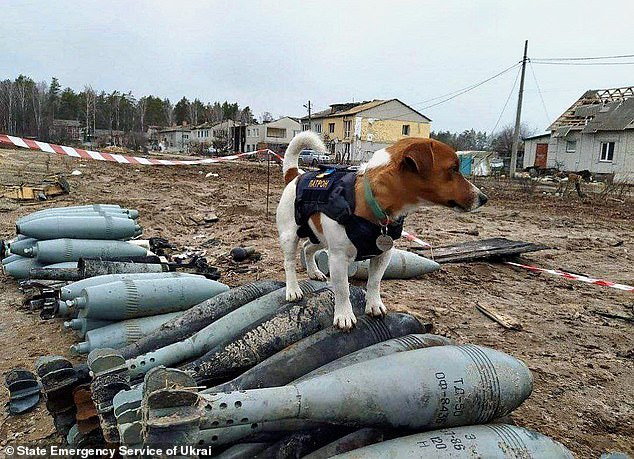 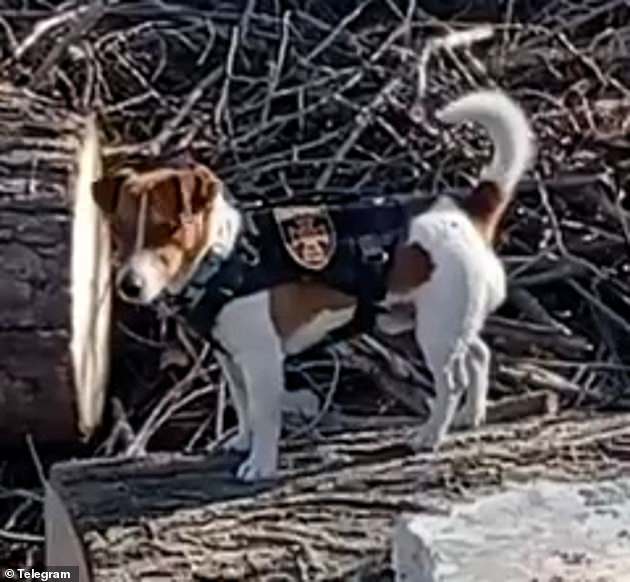 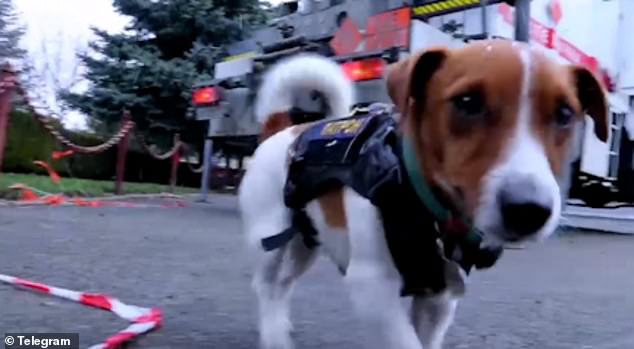 Sometimes, at the end of a day of hard work, Patron the dog is rewarded with a cheesy treat

‘This is his life, it is all he has known. It is just a matter of chance that we have such a capable dog. He is not a service dog, he is my pet, but he has an amazing nose and is an avid learner. He was meant to be a show dog but his destiny was to save people’s lives, not to win prizes.’

From six months, Patron was trained to detect TNT and gunpowder. When he does, he stops rigid and stands with his nose down until Mykhailo and his team approach. 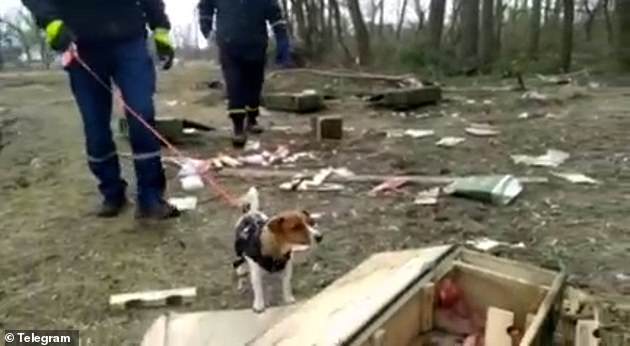 A Telegram post from the Ukrainian emergency services calls the small, cute pup: ‘our militant dog’ 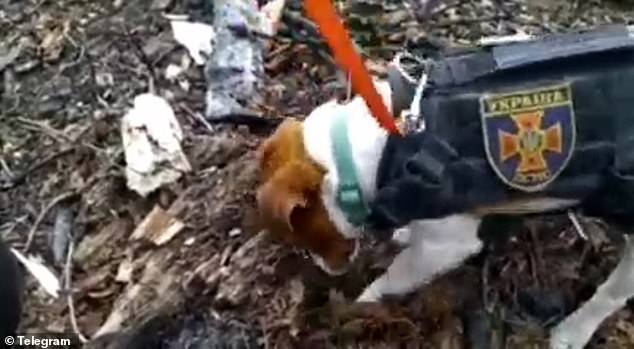 One of Mykhailo’s colleagues on the front line in Kharkiv was recently injured when a mine exploded. Does he worry about Patron? ‘Of course, I am afraid every day for him and about all of my guys,’ he says. ‘But for every month of war, it takes us about a year to clear up all the mines and unexploded shells.’

As we talk, Mykhailo’s team are alerted to abandoned Russian shells, smoke bombs and other canisters nearby. When we arrive, a dozen troops insist on having photographs with the canine celebrity. The tiny dog soon confirms the cache is live and wags his tail as Mykhailo fetches his body armour and helmet from the car. Patron knows a lump of cheese is coming.

Mykhailo and his team carefully place the shells in a hole that, rather charmingly, Patron helps to dig before they are blown up. The blast is ear-splitting, but Patron simply wags his tail. ‘He is used to it,’ says Mykhailo. ‘This is a normal day.’ 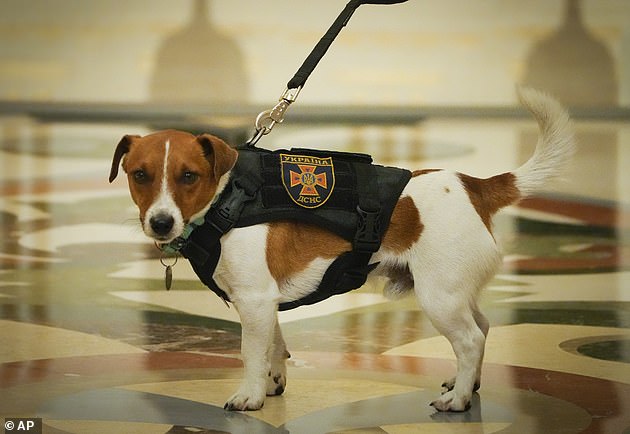 Patron, the pint-sized Jack Russel whose name means ‘cartridge’ or ‘bullet’, is quickly becoming a canine symbol of Ukrainian patriotism 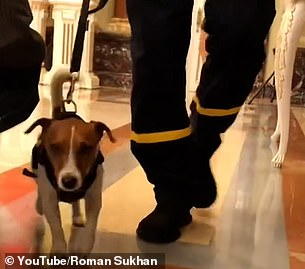 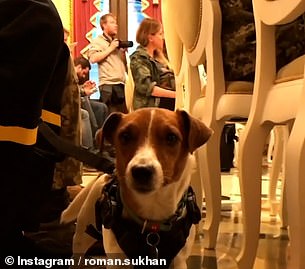 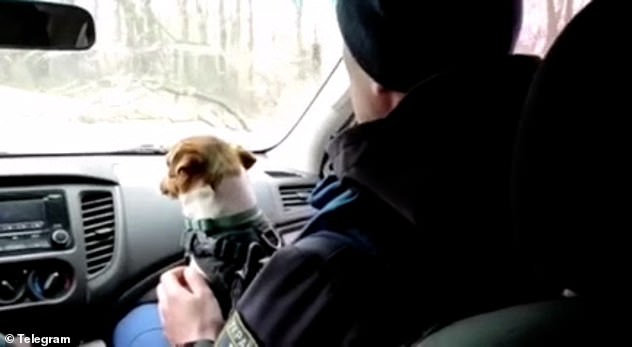 Normal days are rare nowadays for the 19-strong bomb disposal team. Their workload has risen tenfold since the February invasion.

Even indefatigable Patron feels the strain. ‘Some days he is so tired that he does not eat his evening meal. He comes home, has a drink of water and just crashes out,’ says Mykhailo. ‘But he always wakes up excited to go again the next day.’