Millions of Muslims from around the world usually descend on Saudi Arabia for the umrah and haj Islamic pilgrimages. The two share common rites, but the haj, held once a year, is the main lengthier ritual that is a once-in-a-lifetime duty for Muslims.

The umrah, the pilgrimage that can be undertaken at any time, was suspended in March due to the coronavirus pandemic.

Saudi Arabia hosted a drastically reduced haj in late July for the first time in modern history, with a few thousand domestic pilgrims instead of the usual sea of some three million Muslims 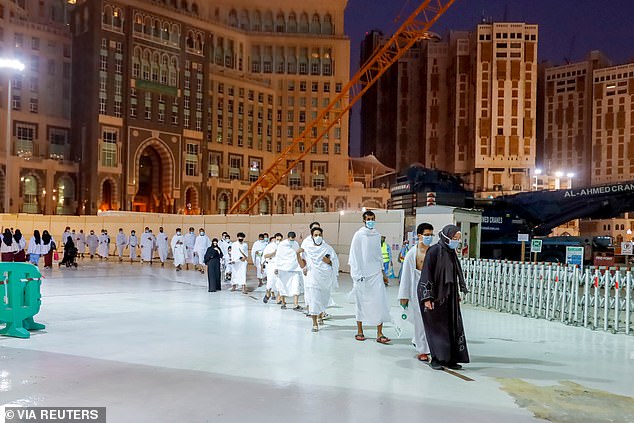 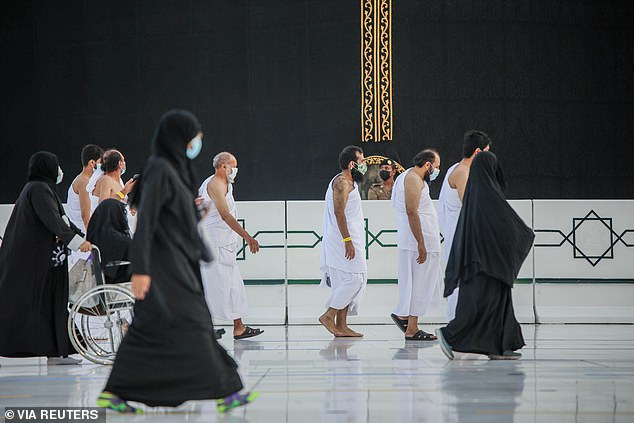 But Saudi Arabia partially lifted the coronavirus ban on Sunday and is allowing citizens and residents to start performing umrah at 30 per cent capacity.

Some 6,000 pilgrims each day can perform the umrah ‘meticulously and within a specified period of time’, Saudi Hajj Minister Mohammad Benten said.

At midnight, registered pilgrims wearing face masks were pictured preparing to enter the Grand Mosque in small groups, while officials ensured they adhered to social distancing.

Worshippers circled the Kaaba, a stone structure that is the most sacred in Islam and the direction which Muslims face to pray.

But they are no longer allowed to touch the Kaaba, which is draped in black cloth adorned with Arabic calligraphy in gold.

In coronavirus safety measures, the Grand Mosque will also be sterilised before and after each group of worshippers enter.

Each group of 20 or 25 pilgrims will be accompanied by a health worker and medical teams will be on the ground in case of an emergency.

Speaking about the partial lifting of the ban, Yasser al-Zahrani said: ‘All of Mecca is happy today, it’s like the end of a jail term. We have missed the spiritual feeling of pilgrims roaming the city.

Zahrani became a full time Uber driver after losing his construction job during the three-month national lockdown imposed in March.

He said: ‘It was a nightmare … there was barely any work to cover my bills.’ 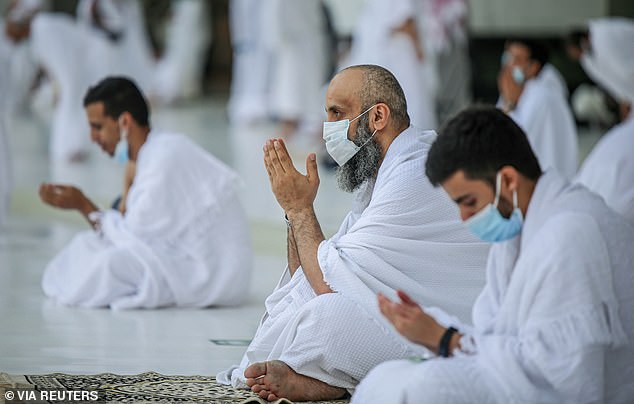 Some 6,000 pilgrims are allowed each day to perform the umrah ‘meticulously and within a specified period of time’, Saudi Hajj Minister Mohammad Benten said 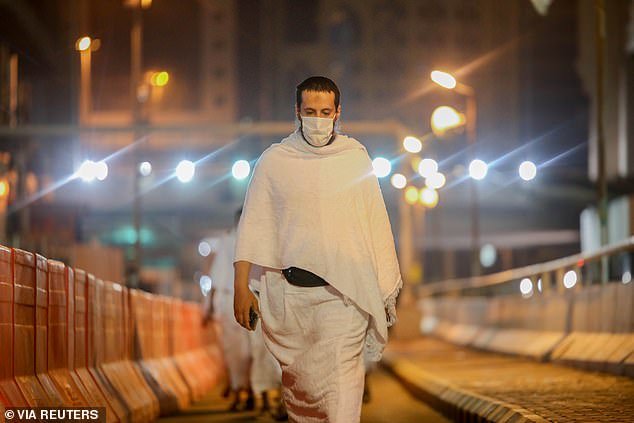 From October 18, a second stage will allow the number of umrah pilgrims to be increased to 15,000 per day

Many businesses were forced to close amid the pandemic, with more than 1,300 hotels and hundreds of stores normally catering to pilgrims visiting the holy cities of Mecca and Medina.

Zahrani said: ‘It is hard to think that this will be the new normal, I pray every day for the corona to end.’

Economists have estimated Mecca’s hotel sector may lose at least 40% of pilgrimage-driven income this year.

Five hotel workers, who declined to be identified, said they were put on unpaid leave during the lockdown and said hundreds of others in the hospitality sector were laid off.

But from October 18, a second stage will allow the number of umrah pilgrims to be increased to 15,000 per day.

A maximum of 40,000 people, including pilgrims and other worshippers, will be allowed to perform prayers at the mosque.

Visitors from abroad will be permitted in the third stage from November 1, when capacity will be raised to 20,000 and 60,000, respectively.

The decision to resume the pilgrimage was in response to the ‘aspirations of Muslims home and abroad’ to perform the ritual and visit the holy sites, the interior ministry said last month.

It added that the umrah would be allowed to return to full capacity once the threat of the pandemic has abated. 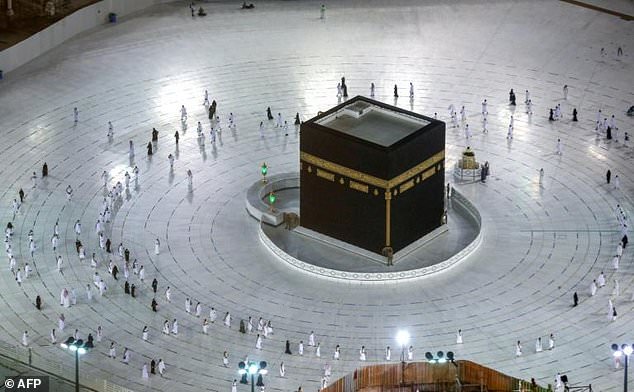 Coronavirus safety measures mean worshippers are no longer allowed to touch the Kaaba, which is draped in black cloth adorned with Arabic calligraphy in gold 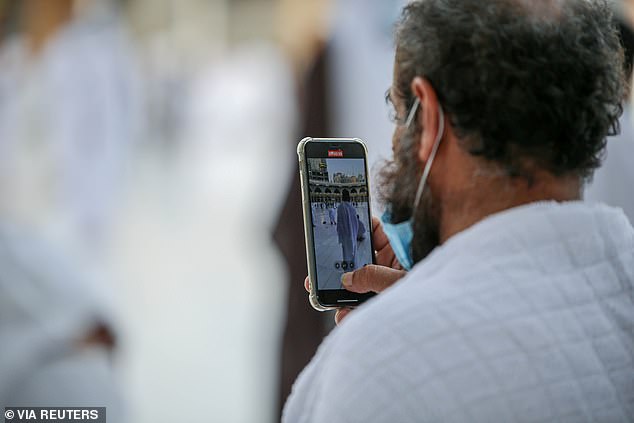 Saudi Arabia hosted a reduced haj in late July for the first time in modern history, with a few thousand domestic pilgrims instead of the usual three million Muslims

Until then, the health ministry will vet countries from which pilgrims are allowed to enter based on the health risks.

Saudi Arabia had suspended the umrah in March and scaled back the annual hajj over fears that the coronavirus could spread to Islam’s holiest cities.

The hajj went ahead in late July, on the smallest scale in modern history, with only up to 10,000 Muslims allowed to take part – a far cry from the 2.5million who participated last year.

Pilgrimage is the backbone of a plan to expand tourism under Crown Prince Mohammed bin Salman’s drive to diversify the economy of the world’s top oil exporter.