UN calls on Nigeria to scrap death penalty for musician

The UN has called on Nigeria to scrap the death sentence handed to a musician by a Sharia court for sharing a blasphemous song on WhatsApp.

Yahaya Aminu Sharif, 22, was handed the death penalty last month by a Sharia court in Kano, in Nigeria’s mostly Muslim north, and faces being hanged.

‘Music is not a crime,’ read a joint statement from the group of UN rapporteurs on Monday.

‘Application of the death penalty for artistic expression or for sharing a song on the internet is a flagrant violation of international human rights law, as well as of Nigeria’s constitution,’ said Karima Bennoune, special rapporteur on cultural rights.

‘Artistic expression of opinion and beliefs, through songs or other media – including those seen to offend religious sensibilities – is protected in accordance with international law,’ the statement added.

‘The criminalization of these expressions is unlawful. Music is not a crime.’

The rights experts said Nigeria should overturn the death sentence and guarantee the singer’s safety while he launched an appeal. 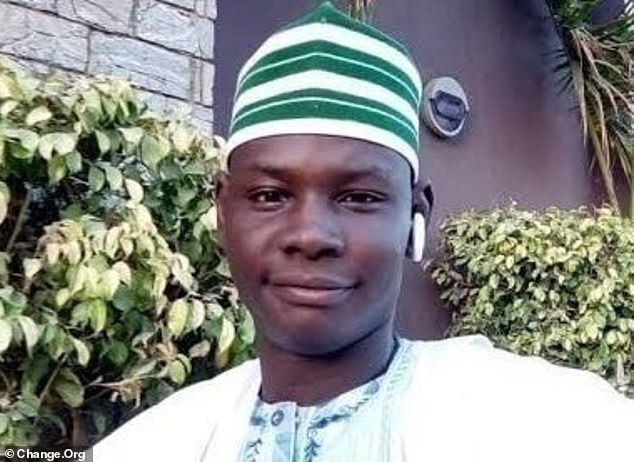 Yahaya Aminu Sharif, pictured, faces being hanged after his conviction in Kano, Nigeria for sharing a blasphemous song on WhatsApp in what has been branded a ‘travesty of justice’ by Amnesty International, with the UN saying ‘music is not a crime’

Protesters enraged by the song burned down Sharif’s family home on March 4 amid protests demanding he be punished.

The singer had gone into hiding after sharing the song, which praised an imam from the Tijaniya Muslim brotherhood to the point where it gave him higher status than the Prophet Muhammad, the BBC reported.

He was later arrested by the Hisbah Corps – a religious police force which enforces Sharia law in the state.

A spokesman for the Kano state judiciary, which runs Sharia courts alongside the civil courts, said the decision was taken with legal backing, adding that he was unaware of the appeal.

‘If we are requested to release him, it has to be through legal procedure,’ said spokesman Baba Jibo Ibrahim.

Legal documents say Sharif was found guilty of ‘a blasphemous statement against Prophet Mohammed in a WhatsApp Group’ – an offence punishable by death in Kano’s Sharia Penal Code.

Sharif reportedly admitted to the crime during his trial for which he did not have a lawyer, but later said he made a mistake.

‘There are serious concerns about the fairness of his trial and the framing of the charges against him based on his WhatsApp messages,’ said Amnesty International’s Nigeria director Osai Ojigho.

‘Furthermore, the imposition of the death penalty following an unfair trial violates the right to life.’

A petition calling for Sharif’s execution to be stopped has been signed by over 86,000 people on Change.org. 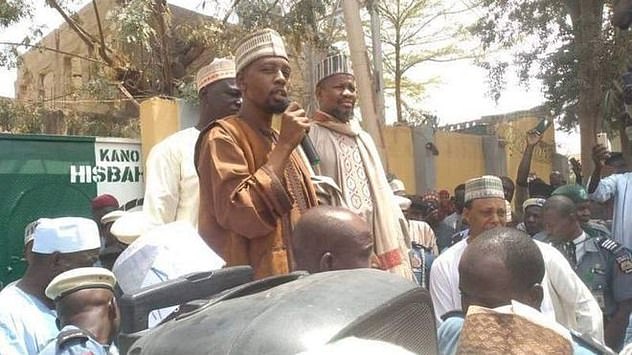 Protesters (pictured) burnt down Sharif’s family home demanding his prosecution, leading to his arrest in March. He was sentenced in August 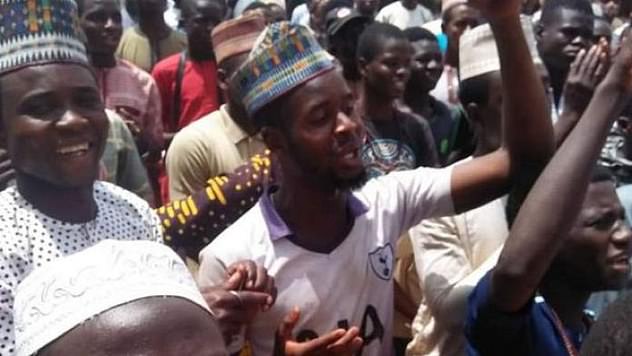 Demonstrators took to the streets demanding the singer be punished for what they say was a blasphemous song. He was later arrested by the Hisbah Corps – a religious police force which enforces Sharia law in the state

Kano’s justice system has been in the spotlight since a Sharia court also sentenced a 13-year-old boy to 10 years in prison last month after he was accused of making blasphemous statements during an argument.

Ibrahim said the court considered the boy’s age as a minor and handed him the prison sentence ‘as a penitence and to make him reform’.

The head of Poland’s Auschwitz Memorial has written to Nigeria’s president asking him to pardon the boy, Omar Farouq, and offering to serve part of the jail term himself as he could not ‘remain indifferent’ as he represented a place where children were imprisoned and murdered.

Piotr Cywinski said dozens of people from around the world had also volunteered to serve part of Farouq’s jail term.

‘From the United States, from Europe, from Asia, from Africa, including Nigeria … I’m not even able to sit down and count them all but there are certainly many more than 120,’ Cywinski told Reuters. 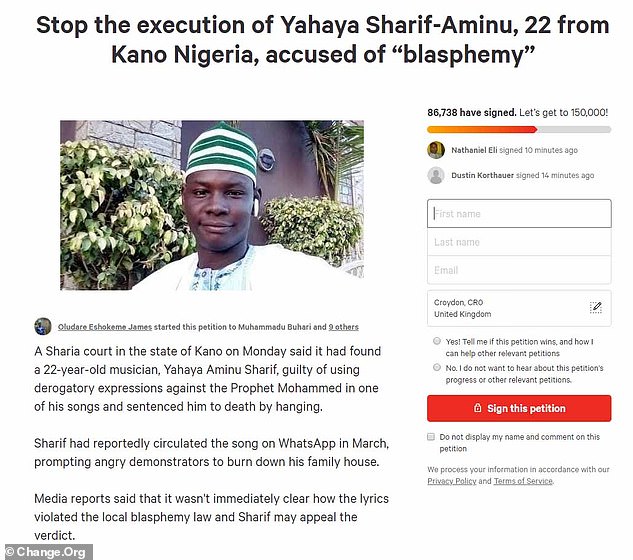 A petition calling for the execution of Sharif to be stopped has been signed by more than 86,000 people (pictured) on Change.org

Two spokesmen for Nigeria’s President Muhammadu Buhari declined to comment on Monday on either of the Sharia court rulings in Kano.

Kano, in predominantly Muslim northern Nigeria, has Islamic Sharia courts that function alongside civil courts and introduced Sharia law in 2000.

To date, though, no executions have been carried out.

The most recent death penalty for blasphemy was given in 2015 to nine followers of the Tijani Muslim sect, though these have also yet to take place.