Washington: A massive fire destroyed Europe's largest camp for asylum seekers on Wednesday local time, displacing 12,500 migrants on the Greek island of Lesbos who were supposed to be under coronavirus quarantine and leaving them with no obvious place to go.

After helicopters doused the final embers, authorities said some camp residents appear to have started the fire as a protest over new mandatory quarantine measures amid a coronavirus outbreak at the site. But they said the investigation was not complete. 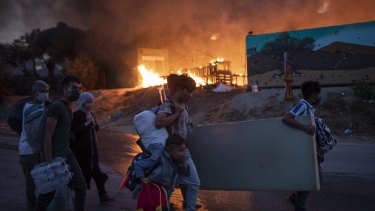 Migrants flee from the Moria refugee camp during a second fire, on the northeastern Aegean island of Lesbos, Greece.Credit:AP

"The combination of migration and the pandemic in these conditions creates a situation that is extremely demanding to manage," said George Koumoutsakos, Greece's deputy migration and asylum minister.

Video showed people fleeing the camp overnight, the sky orange and yellow, as the camp's tents and shipping containers were engulfed in flames.

Some migrants, attempting to make their way to the island's main town, were met by police.

By morning, the camp was little more than charred husks and collapsed buildings. One photo showed a razed olive grove, once crowded with tents, where only two portable toilets remained standing.

The fire sets off the largest emergency to date at a site that has long been the symbol of Europe's failure to safely manage and care for the waves of migrant arrivals on the continent. 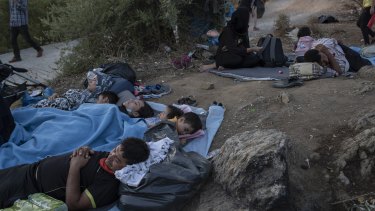 Greece said it would try to find temporary housing for the camp's migrants, including on ferries and naval vessels, as well as in tents.

"I recognise the difficult conditions. However, nothing can become an alibi for violent reactions to health checks," Prime Minister Kyriakos Mitsotakis said. "And much more, for riots of this magnitude."

There were no reports of injuries or deaths from the fire.

Well before the pandemic, the camp, known as Moria, had been beset by protests, fatal fires and chronic sickness. It was filled many times beyond capacity and was cited by international aid groups as unsafe and inhumane. It continued to operate only because Greece – and Europe – were unable to find alternatives.

"Events in Moria last night are unthinkable but, tragically, predictable as the dire situation on the islands has gone on for far too long," said Dimitra Kalogeropoulou, the Greece country director for the International Rescue Committee.

Kalogeropoulou said the camp's residents appeared to have safely fled but are "left with nothing."

"Already traumatised people have now lost what few belongings they had," she said.

The pressures on asylum seekers at the camp intensified last week when officials detected the first positive coronavirus case there. A subsequent testing campaign then detected 34 additional positive cases, and the camp was put under lockdown.

At the time, the aid confederation Oxfam noted that social distancing and good hygiene were all but impossible at the camp, given its squalid and cramped conditions.

The Greek government drafted a blueprint for closing Moria and other island migrant centres and creating more permanent structures on taking power last year. But it has faced local resistance in places that might host the centres.

Before the fire, Greece had been transferring some asylum seekers to the mainland, while a handful of other European Union countries had agreed to take in some of the most vulnerable migrants, especially unaccompanied children.

Moria's population was closer to 20,000 at the beginning of the pandemic.

As the camp burned, Greece declared a state of emergency on the island, and the whereabouts of the 35 migrants who had tested positive were unclear. Stelios Petsas, a spokesman for the government, told the public broadcaster ERT that the migrants would not be allowed to leave the island.

Ylva Johansson, the EU's home affairs commissioner, said that Europe had "agreed to finance the immediate transfer and accommodation on the mainland of the remaining 400 unaccompanied children and teenagers."

"The safety and shelter of all people in Moria is the priority," she wrote on Twitter.

The German state of North Rhine-Westphalia said it is willing to accommodate 1000 of the asylum seekers, and Germany's foreign minister, Heiko Maas, called on other countries to pitch in, as well.

Movhgan Isar, a 16-year-old asylum seeker from Afghanistan, said he and his family had been stopped by police as they tried to walk to the town of Mitilini.

"We are now on the street, but there is no shade," he said in a phone interview. "We have no food or water. We need help."