Seoul: Dog meat could disappear from restaurants in South Korea after the government appointed a taskforce on Thursday to look at banning eating the animals.

Moon Jae-in, the president and a known animal-lover, has previously suggested it was time to ban the sale and consumption of dog meat. 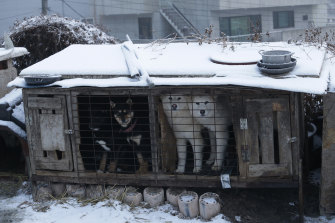 Dogs are seen in a cage at a dog meat farm in Siheung, South Korea. Credit:AP

Eating the animal has been part of Korean culture for centuries, although its popularity has fallen in recent years.

There were fewer than 100 dog meat restaurants in Seoul in 2019, and the last major dog meat market closed earlier this year.

Lee Won Bok, head of the Korea Association for Animal Protection, said: “South Korea is the only developed country where people eat dogs, an act that is undermining our international image. Even if the K-pop band BTS and the [Korean TV drama] Squid Game are ranked No 1 in the world, foreigners are still associating South Korea with dog meat and the Korean War.” 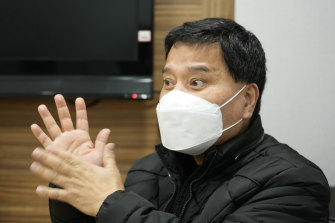 Dogs are consumed as food in North Korea, China and Vietnam as well as in South Korea.

A poll conducted last year by Humane Society International showed that 84 per cent of Koreans do not or will not eat dog and 60 per cent supported a legal ban on the trade.

However, the plans will face opposition from older Koreans who insist the meat is a traditional part of the nation’s cuisine that supposedly provides stamina and increases male virility.

The government said that “public awareness of their basic rights and animal rights issues are tangled in a complicated manner” when it comes to dog meat consumption. 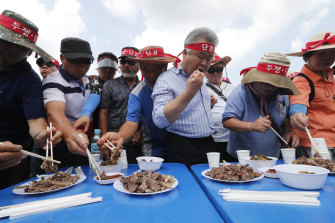 Korean Dog Meat Association members eat dog meat during a rally in support of the controversial, but traditional, cuisine. Credit:AP

Yonhap News quoted Kim boo-Kyum, the prime minister, as saying: “The controversy over dog meat [is] not new and has persisted for more than 30 years, since the 1988 Seoul Olympics.

“With the [increase] in the number of households with pets and growing public interest in animal rights and animal welfare, we are witnessing increasing calls against viewing meat consumption as part of our old food culture.”

The dog meat industry is also expected to resist any legal ban.

Currently, the foodstuff is neither legal nor explicitly banned in South Korea. Animal rights campaigners and pet-owners, however, welcomed the news yesterday.

“As someone who has witnessed the cruelty first-hand, it’s the suffering of the dogs that motivates me to achieve a ban”, said Nara Kim, who leads HSI’s End Dog Meat campaign.

“These dogs are caged in horrific conditions, with minimal food, with absolutely nothing to protect them from the extreme cold winters and overwhelmingly hot summers,” she told The Daily Telegraph.