US faced with protests amid pressure to reopen 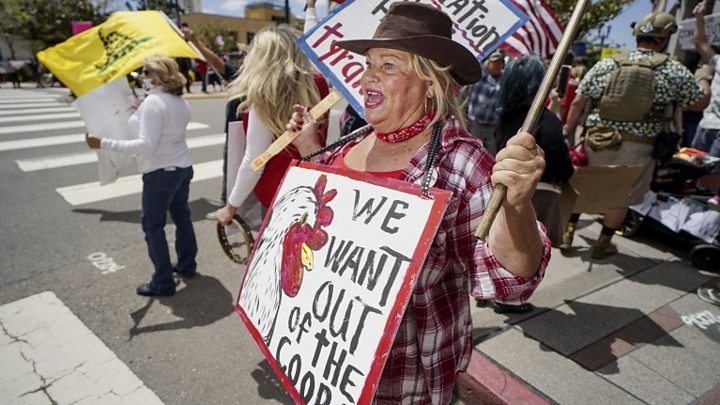 Protesters have taken to the streets in states across the US, demanding that governors reopen economies shut by the coronavirus pandemic.

Rallies in Arizona, Colorado, Montana and Washington state were expected on Sunday, following earlier protests in half a dozen states.

Agitation for easing restrictions has grown, despite the risk of a Covid-19 resurgence posed by reopening too soon.

US President Donald Trump has signalled support for the protests.

The US is the epicentre of the Covid-19 crisis, with over 735,000 cases and some 40,000 deaths – but signs have emerged that it is reaching the apex of the outbreak and that infection rates are slowing in some states.

Governors in several states have begun discussions to plan reopening amid signs of the slowdown, but other regions remain under strict lockdown.

California Governor Gavin Newsom was the first in the nation to issue a state-wide stay home order, shuttering the country’s most populous state since 19 March. Neighbouring west coast states Washington and Oregon followed suit days later, putting their combined 11.5 million residents under a stay at home order since 23 March.

New York Governor Andrew Cuomo announced this week that the state would extend its stay home measures until 15 March. Speaking at his daily virus briefing on Sunday, Mr Cuomo urged caution to residents, beset with “cabin fever” and desperate for their state to reopen.

“We still have to make sure we keep that beast under control,” Mr Cuomo said. “As we all get very eager to get on with life and move on.”

“This is only halftime in this entire situation.”

Mr Trump, a Republican, appeared to endorse protests against strict lockdown measures, saying on Friday that orders in place in Minnesota, Michigan and Virginia were “too tough”.

The measures are needed to curb the spread of the virus.

“To have an American president to encourage people to violate the law, I can’t remember any time in my time in America we have seen such a thing,” he said on ABC news on Sunday.

Nancy Pelosi, the Democratic Speaker of the House, accused Mr Trump of endorsing the protests as a “distraction”.

“The president’s embrace of it as a distraction from the fact that he has not appropriately done testing, treatment, contact tracing and quarantine,” she told ABC.

So-called “Operation Gridlock” protests backed by libertarian leaning groups were expected to attract as many as several hundred people to the state capitols in Denver, Colorado and Phoenix, Arizona on Sunday.

In Denver, protesters had descended upon the state capitol to demonstrate against the state’s social distancing orders. Dozens of cars circled the capitol, local media report, while roughly 200 people assembled on the lawn, brandishing signs and flags.

On Saturday, protesters gridlocked the streets of Annapolis, Maryland, honking car horns in protest of lockdown measures. More than 200 people rallied outside the residence of the Indiana governor, while about 200 gathered in Austin, Texas.

Further protests are expected on Monday.