US investigating whether virus came from Wuhan lab: Trump

Washington: US President Donald Trump says his government is trying to determine whether the coronavirus emanated from a lab in Wuhan, China, and Secretary of State Mike Pompeo said Beijing "needs to come clean" on what they know.

The source of the virus remains a mystery, although the broad scientific consensus holds that SARS-CoV-2, its official name, originated in bats. It is generally believed that it infected humans via another animal, possibly a pangolin, sold at a wet market in Wuhan.

General Mark Milley, chairman of the Joint Chiefs of Staff, said on Tuesday, US time, that US intelligence indicated the coronavirus likely occurred naturally, as opposed to being created in a laboratory in China, but there was no certainty either way. 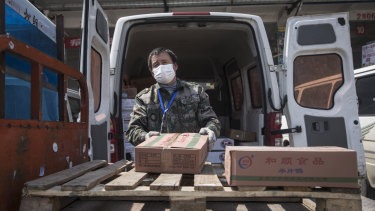 A vendor unloads boxes of goods at the Baishazhou wet market in Wuhan, Hubei Province, China. The Chinese city where the coronavirus first emerged has stirred back to life following a lockdown lasting for months.Credit:Bloomberg

Fox News reported on Wednesday that the virus originated in a Wuhan laboratory not as a bioweapon, but as part of China's effort to demonstrate that its efforts to identify and combat viruses were equal to or greater than the capabilities of the United States.

It followed an earlier report in the Washington Post stating that two years before the start of the pandemic, US embassy officials visited a Chinese research facility in Wuhan and sent two official warnings back to Washington about inadequate safety at the lab, "which was conducting risky studies on coronavirus from bats".

Josh Rogin wrote in the Post that "The cables have fuelled discussions inside the US government about whether this or another Wuhan lab was the source of the virus — even though conclusive proof has yet to emerge."

The Fox News report and others have suggested the Wuhan lab's lax safety standards led to someone being infected and appearing at a nearby "wet" market, where the virus began to spread.

At a White House news conference Trump was asked about the reports of the virus escaping from the Wuhan lab, and he said he was aware of them.

"We are doing a very thorough examination of this horrible situation that happened," he said. 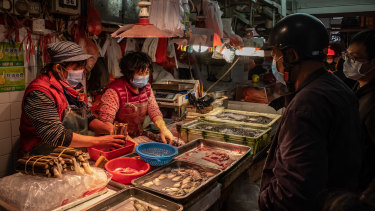 A wet market in Macau, China. Live animals, including wildlife, are often sold in such markets.Credit:Getty Images

Trump has sought to stress strong US ties with China during the pandemic as the United States has relied on China for personal protection equipment desperately needed by American medical workers.

As far back as February, the Chinese state-backed Wuhan Institute of Virology dismissed rumours that the virus may have been artificially synthesised at one of its laboratories or perhaps escaped from such a facility.

Pompeo, in a Fox News interview after Trump's news conference, said "we know this virus originated in Wuhan, China" and that the Institute of Virology was near the wet market.

"We really need the Chinese government to open up" and help explain "exactly how this virus spread," said Pompeo.

"The Chinese government needs to come clean," he said.

In its literature, the World Health Organisation says that since the 2002-2003 SARS epidemic — it affected 26 countries and resulted in more than 8000 cases — "a small number of cases have occurred as a result of laboratory accidents or, possibly, through animal-to-human transmission (Guangdong, China)".

The British National Health Service says the smaller 2004 SARS outbreak was linked to a medical laboratory in China. "It was thought to have been the result of someone coming into direct contact with a sample of the SARS virus, rather than being caused by animal-to-human or human-to-human transmission".