Washington: On its website, the University of Farmington advertised an innovative science and technology curriculum that would prepare students to compete in the global economy, and flexible class schedules that would allow them to enroll without disrupting their careers. 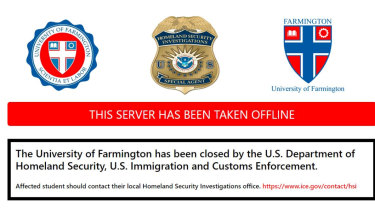 The University of Farmington – an online sting operation aimed at foreigners in the US.Credit:US ICE

The Michigan-based school touted the number of languages spoken by its president (four) and the number of classes taught by teaching assistants (zero.)

Photos of the campus showed students lounging around with books on a grassy quad, or engaged in rapt conversation in its brightly-lit modern library. Tuition was relatively reasonable – $US8500 a year for undergraduates and $US11,000 a year for graduate students.

"Located in the heart of the automotive and advanced manufacturing centre of Southeast Michigan, the University of Farmington provides students from throughout the world a unique educational experience," the site informed prospective applicants.

But there were no classes taking place at the university, which employed no instructors or professors. 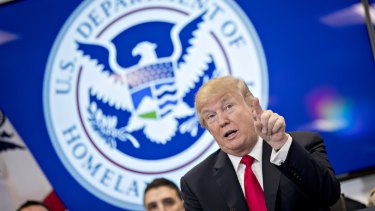 The pace of the sting operation has stepped up under the Trump presidency.Credit:Andrew Harrer

In court filings that were unsealed on Wednesday, federal prosecutors revealed that the school's employees were actually undercover agents working for US Immigration and Customs Enforcement.

The fake university had been set up in 2015 as part of an elaborate sting operation aimed at ensnaring foreign nationals who had initially come to the United States on student visas. Its "campus" consisted of a small office in a corporate park in the northwestern Detroit suburb of Farmington Hills, Michigan, with no quad or library in sight.

The phony university was "being used by foreign citizens as a 'pay to play' scheme," prosecutors allege.

After forking over thousands of dollars, students would provide immigration authorities with evidence that they were enrolled in a full-time educational program. They could then continue to live and work in the United States under a student visa.

But since the University of Farmington didn't actually exist, they didn't have the hassle of writing papers, taking tests or showing up to class.

Students knew that the scheme was illegal, "and that discretion should be used when discussing the program with others," prosecutors wrote in their indictment, which was filed January 15 in the US District Court for the Eastern District of Michigan.

According to the Detroit News, which first reported on the undercover operation, dozens of University of Farmington students were arrested on immigration violations on Wednesday as part of a massive nationwide sweep, and are now potentially facing deportation.

In addition, eight people who allegedly worked as "recruiters" for the school and collectively helped at least 600 students to remain in the country under false pretenses now face federal conspiracy charges.

ICE could not be reached for comment late on Wednesday night. It's unclear how many past or present students could be facing deportation as a result of the sting.

The Department of Homeland Security's list of certified schools where international students can enroll includes the University of Farmington.

And the school made some pretense of being a legitimate institution.

Before Wednesday night, when the school's Facebook and Twitter accounts were abruptly deleted, posts on social media notified students about school cancellations due to an ice storm, and advertised an upcoming admissions fair. It had a Latin motto – "Scientia et Labor," meaning "Knowledge and Work" – and a handful of positive online reviews from people claiming to be satisfied alumni.

But no one enrolled at the university was making progress toward a degree, the indictment said.

The "unique educational experience" promoted on the school's website apparently consisted of not going to school at all.

There were some clues that not everything was aboveboard.

The school's website never said how many enrolled students it had, though it claimed that they came from all 50 states and 47 countries.

It didn't name the university's president or the year when the school was founded. As the Detroit News's Robert Snell noted on Twitter, a photo showing a diverse group of students deep in concentration came from Shutterstock.

The university claimed to be accredited by the Accrediting Commission of Career Schools and Colleges, but did not appear in an online directory of accredited institutions on the organisation's website.

According to prosecutors, students were well aware that the school was a fraud.

They allegedly chose to enroll anyway because doing so would allow them to remain in the country on F-1 nonimmigrant visas, which allow foreign citizens to temporarily reside in the United States while studying accredited academic institutions.

Khaalid Walls, a spokesman for ICE in Detroit, told local news station WXYZ that the students had entered the United States legally on F-1 visas after being accepted to legitimate schools, and had later transferred to the University of Farmington.

The federal indictments name eight people in eight states who allegedly worked as recruiters for the school. All have been arrested and charged with conspiracy to commit visa fraud and harboring aliens for profit. They face a maximum sentence of five years in prison.

The eight recruiters allegedly helped create fraudulent records, including transcripts, that students could give to immigration authorities.

Authorities contend that they collectively accepted more than $US250,000 in kickbacks for their work, not realising that the payments were actually coming from undercover agents who worked for Homeland Security Investigations, a division of ICE.

"We are all aware that international students can be a valuable asset to our country, but as this case shows, the well-intended international student visa program can also be exploited and abused," Matthew Schneider, the US Attorney for the Eastern District of Michigan, said in a statement emailed to media outlets on Wednesday.

This isn't the first time that the feds have set up a fake university with the goal of rooting out visa fraud.

Calling "pay to stay" a national security threat, officials announced in April 2016 that they had charged 21 people with recruiting international students who paid to enroll at the made-up University of Northern New Jersey so that they could get student visas.

More than a dozen students who partook in the scheme later told the New York Times that they felt they had been deceived by the government.

Many of the students who enrolled at the University of Farmington appear to be Indian nationals who belong to the Telugu ethnic group. The American Telugu Association said in a Wednesday s tatement that "scores of Telugu students nationwide" had been arrested in early-morning raids, and that the organisation was attempting to provide them with legal guidance.

As the News noted, the undercover investigation seems to have ramped up one month after President Trump took office. While the fake university was set up in 2015, it wasn't until February 2017 that HSI agents began posing as university officials, the indictment said. The undercover operation, nicknamed "Paper Chase," continued until earlier this month.

Over the years, the university's ghostly presence in the basement of suburban Detroit office park aroused at least one neighbor's suspicions.

"I was like 'what is this?'" Matt Friedman, who runs a strategic communications firm based in the same complex, told the News. "I'd never heard of it before and never saw anybody there. The whole thing was just odd."