The United States Air Force is preparing to test launch its new hypersonic missile that is said to be capable of flying 20 times the speed of sound.

The Air Force said that the booster test, which will take place sometime this month, will have a B-52H bomber carry an AGM-183A missile high into the air and launch it at more than five times the speed of sound.

The missile, an Air-launched Rapid Response Weapon (ARRW), would then deploy a dummy second stage that would ‘disintegrate’ somewhere in the atmosphere.

The upcoming test this month will only test the missile’s rocket booster rather than the missile as a whole.

When the finalized weapon is deployed, it is the second stage that will push the missile to hypersonic speeds making it almost invulnerable to anti-missile defenses.

The test flight will ‘demonstrate the booster’s ability to reach operational speeds and collect other important data,’ according to the Air Force. 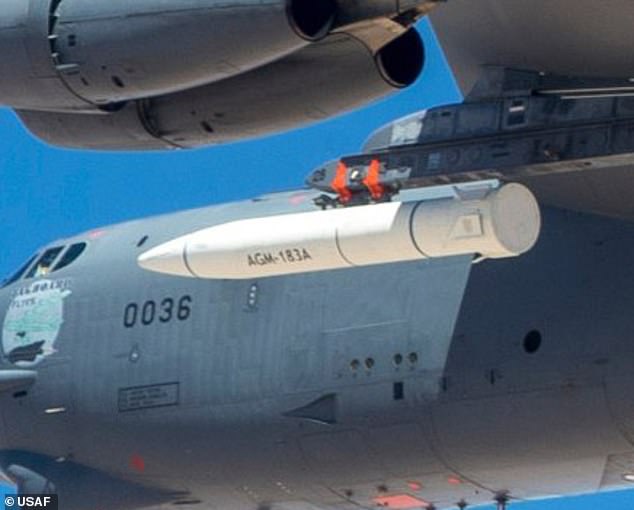 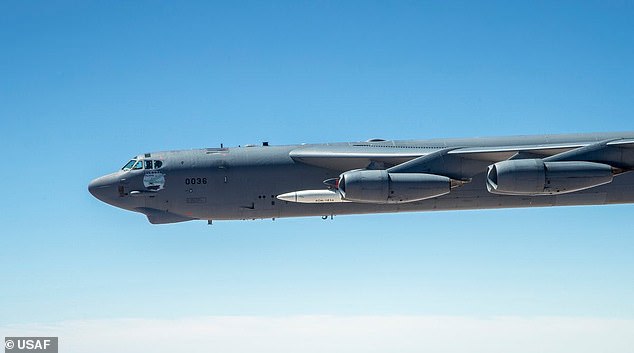 The weapons, which were first pictured being carried by a B-52 bomber during USAF tests in June 2019, are the first hypersonic weapons in the US arsenal 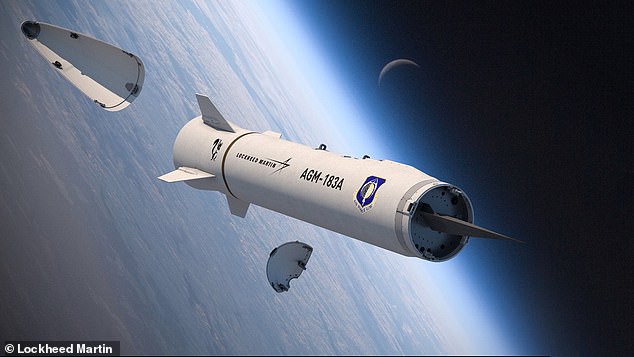 The flight will ‘validate safe separation and controllability of the missile away from the carrier B-52H, through ignition and boost phase, all the way up to separation of a simulated glide vehicle.’

After releasing the dummy glide vehicle, it ‘will not sustain flight, and will disintegrate soon after separation.’

‘Our first BTF (booster test flight) will happen in the next 30 days, followed by several additional booster and all-up round test flight by the end of the year,’ said Air Force Brigadier General Heath A. Collins.

The service said that the BTF-1 test flight ‘will be the eighth flight test for the ARRW program, following seven captive-carry carriage flight tests.’

The ARRW will be the first hypersonic weapon in the American military arsenal.

According to Live Science, the ARRW is supposed to move at about 20 times the speed of sound through the atmosphere.

It is designed to be so fast so as to make it impossible for anti-missile systems to shoot it down. 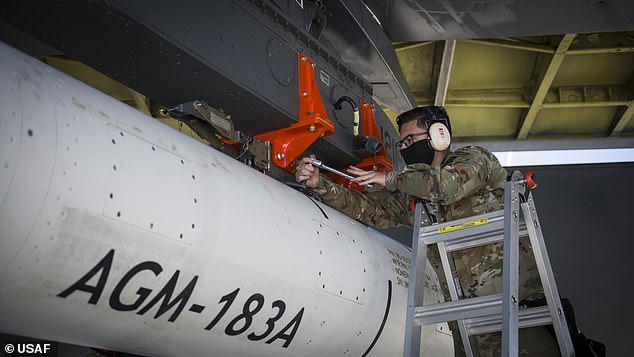 The Air Force said in a statement that the weapon was designed to destroy ‘high-value, time-sensitive targets.’

The hypersonic missile is designed to operate in two stages. The first stage has the rocket accelerate to several times the speed of sound while flying at a lower altitude than a conventional Intercontinental Ballistic Missile (ICBM).

ICBMs fly along a high arc above the atmosphere and then deliver their nuclear payloads.

In the second stage, the ARRW releases a glider that carries the weapon for the final leg of its journey to the target.

Because ARRWs are designed to fly at lower altitudes than ICBMs, it makes them harder to detect and to intercept since missile defense technology is geared toward shooting down projectiles close to the peak of their arc through space.

There are two primary categories of hypersonic weapons: Hypersonic glide vehicles that are launched from a rocket before gliding to a target and hypersonic cruise missiles that are powered by high-speed, air-breathing engines after acquiring their target.

The US, as well as China and Russia, have so far focused research and development on both categories of hypersonic weapons – both of which could carry conventional or nuclear payloads.

The two types of hypersonic weapons:

A hypersonic glide vehicle is boosted aloft on a rocket to heights of between 25 miles to 62 miles above the earth before detaching to glide along the upper atmosphere towards its target.

It is released at a height and speed that would allow it to glide unpowered to the target.

Control surfaces on the glide vehicle mean it can steer an unpredictable course and maneuver sharply as it approaches impact.

These glide vehicles follow a much flatter and lower trajectory than the high, arching path of a ballistic missile.

These missiles are powered by high-speed, air-breathing engines after acquiring their target.

While they have internal engines,  unlike regular cruise missiles, they travel far faster and higher.

A hypersonic glide vehicle is boosted aloft on a rocket to heights of between 25 miles to 62 miles above the earth before detaching to glide along the upper atmosphere towards its target.

It is released at a height and speed that would allow it to glide unpowered to the target. Control surfaces on the glide vehicle mean it can steer an unpredictable course and maneuver sharply as it approaches impact.

The prototype missiles could be available to use on the battlefield in 2022.

However, the ARRW project is reportedly a year behind schedule and has seen its total cost increase by almost 40 per cent.

Development began in 2018, with the design contract being awarded to Lockheed Martin.

In June 2019, a B-52 bomber was pictured carrying a test version of the missile. The plane is set to be the main launching platform for the missiles.

‘Program officials stated that they plan to deliver eight hypersonic missiles: four to conduct flight tests and four spares,’ according to the Congressional Government Accountability Office.

‘Specifically, [the] ARRW [program] plans to develop an operational prototype with solid-fuel booster, ordnance package, and specialized equipment to enable it to be carried on the B-52H.’

‘According to program officials, the program will build knowledge through the flight and operational testing of prototype units, as well as potentially provide an operational capability from the deployment of any remaining spare test units,’ the review added.

The US has been developing hypersonic weapons since the early 2000s, according to a Congressional Research Service report published in July of 2019.

The Pentagon’s budget request for all hypersonic-related research throughout 2020 was a whopping $2.6 billion, according to the GAO research report.