The University of Virginia (UVA) announced Thursday that it will mandate coronavirus vaccines for in-person students in the fall.

The announcement marks a significant development in the discussion around vaccine mandates: UVA is the largest public school in Virginia. Previously, The College of William & Mary was the only public school that had announced plans to mandate vaccines for the fall term.

The school announced its decision on its website, including a number of updates about protocols to the fall, but the most notable was the first major item, labeled a “requirement for all in-person students.” 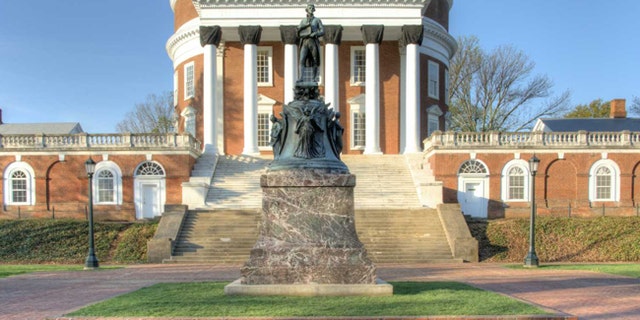 The monument to Thomas Jefferson, UVA founder and U.S. Founding Father, outside the rotunda at the University of Virginia.
(Wikimedia)

“All students who live, learn, or work in person at the University during the next academic year must be fully vaccinated before returning to Grounds, starting July 1,” the notice said, providing a link that requires students to upload proof of vaccination by that date.

“This approach will enable our students to return … safely,” the school says. The notice adds that students can seek a medical or religious exemption; however, any exemption will instead subject the student to weekly testing and “other public health measures.”

Virginia institutions had initially held off on instituting any kind of mandate, questioning the legality of such policies, NBC 29 reported in late April.

“Many legal scholars have interpreted that as saying that people cannot be required to take a vaccine that is under an emergency use authorization,” said Lisa Lee, professor of public health at Virginia Tech. “They can be when it has full approval, so that’s where the hitch is.”

However, UVA’s decision follows a number of changes in the past two weeks, including the new Centers for Disease Control and Prevention (CDC) guidance that suggested fully vaccinated people do not need masks in most settings, which Virginia Gov. Ralph Northam adopted as statewide guidance.

“As we look back on an academic year where the pandemic changed every part of life at UVA, the availability and effectiveness of the vaccines will make it possible for all of us to live, learn, and work together in more “normal” ways in the year to come,” the notice said.