As daylight emerged over St Kilda Beach on Australia Day, representatives of the Boonwurrung Traditional Owners began a ceremony of We-Akon Dilinja – mourning and reflection.

Indigenous Australians delivered readings, music and a smoking ceremony, connecting the small crowd of parents and children to the land and cleansing them of bad spirits. Leaders from many religions spoke too. Some in the crowd wore shirts of the newly-freed Aboriginal flag. 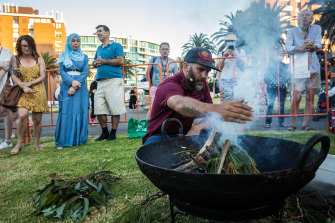 The colour of blood had dripped down the explorer’s face and onto the base of the statue, which was papered with flyers proposing Australia Day no longer be celebrated.

Here was the demonstration of the complexity around January 26, a day intended to celebrate a multicultural Australia – a nation where, as the majority become more socially and historically aware, those on both extremities of the discussion dig their feet in deeper.

Local mayor Marcus Pearl was dismayed by the vandalisation. 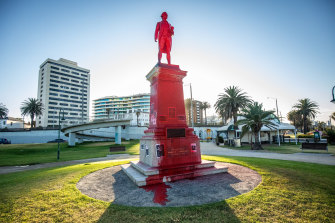 The Captain James Cook statue in St Kilda was covered in red paint before the sun rose on Wednesday.Credit:Scott McNaughton

“We had a very beautiful, respectful service with our traditional landowners this morning, and that was a fitting occasion I thought, and then to come down and see this, personally I was a bit disappointed,” the leader of Port Phillip Council said.

The Indigenous community unequivocally agrees Australia Day should not occur on January 26. Beyond that, views still vary.

Tarneen Onus Williams is a community organiser for Warriors of the Aboriginal Resistance, who normally lead the thousands marching in Melbourne’s Invasion Day protest. It was cancelled due to COVID-19 this year in favour of an online dawn service.

“There is no day appropriate, so we must abolish Australia Day,” she told The Age. 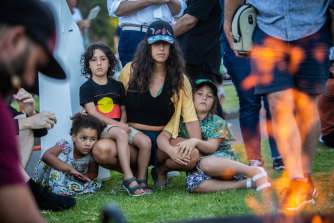 Parents and children gathered at the St Kilda ceremony, some wearing the newly-freed Aboriginal flag.Credit:Scott McNaughton

“There is no day to celebrate: every day on the calendar there was a massacre, Aboriginal people dying in custody, children being taken away and mining companies looting our land.”

Ms Onus Williams believes the public’s social consciousness is shifting but points to the number of Indigenous deaths in custody – 15 in 2020-21 – as a sign of a lack of progress.

She said statues of explorers and colonisers such as Cook should suffer the same fate as Australia Day.

“Wednesday’s painting shows that people are getting tired of the lies. Lots of people are waking up to realise Captain Cook did not discover Australia. He stole our land.”

Geraldine Atkinson, co-chair of the First Peoples’ Assembly of Victoria, thinks a different date should be found where all people and cultures can celebrate Australia.

“A new date would bring us together, it would get rid of this day where a majority is celebrating but a minority is mourning,” she said.

Ms Atkinson is helping lead Victoria’s truth-telling process, charting the events of colonisation that have shaped modern Indigenous communities by speaking to them as well as to non-Aboriginals. The Yoo-rrook Justice Commission will deliver its interim report in June.

She believes it will be crucial in accelerating conversations about Australia Day. 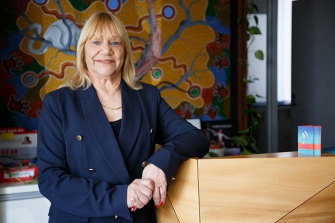 Co-chair of the First Peoples’ Assembly of Victoria, Geraldine Atkinson.

“Through this process we want to realise how colonisation still impacts us today, generations after it happened. There will be so many stories, a lot of it traumatic. But if people learn the truth, I hope they will understand why we need to change the date.”

Ms Atkinson, a leader in Victoria’s Aboriginal community for more than 30 years, condemned the defacing of the Captain Cook statue.

“I’d never promote anything like that. Just sometimes you to have to think: there are some really famous Aboriginal people, why don’t they put up more statues of them around the place?”

At St Kilda Beach on a hot Melbourne day, no one supported defacing the nearby statue but most stopped short of condemning those who did. 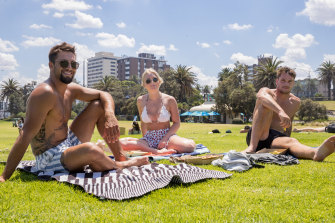 Wade Stevens, 24, said he would not deface the statue to make a point, but understood the frustration of people desperate for change and exasperated by the lack of progress.

“It’s probably a bit of a kick in the teeth to some Aboriginal people, that everyone celebrates the day that their families were invaded,” he said.

“I just reckon we should just move the date and be done with it.”

“And then to also recognise the history we have had since settlement too, and to reflect on that,” he said, adding a minute’s silence could be incorporated into Australia Day to acknowledge First Nations people.

Nick Sayer and his partner Janine Bell-Sayer had set their alarms for 5.30am and attended the sunrise mourning ceremony before settling down on the sand.

“It’s important to recognise that it does mean a day, that symbolises dispossession and colonisation, everything that went along with that,” Mr Sayer said.

In Sydney, where a Captain Cook statue was defaced last year, police estimated 4000 people took part in an Invasion Day march through the city centre. Thousands also attended a rally in Canberra. 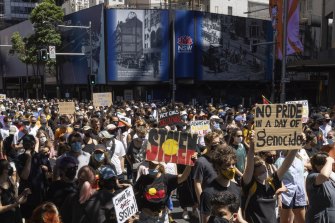 Sydney event organiser Clayton Simpson-Pitt, of the NSW Aboriginal Land Rights Association, said he had not expected such a high turnout given continuing concerns about the coronavirus.

“Five years ago you would never have seen this many people show up,” he said. “It’s a testament to the support we have in the community.”

Speaking at a citizenship ceremony in Canberra on a day when 16,000 people became citizens across the country, Prime Minister Scott Morrison recognised Indigenous Australians, healthcare workers and defence force members.

“Today there are thousands of gatherings across the country, each reflecting in a different way and celebrating our love of Australia,” Mr Morrison said. 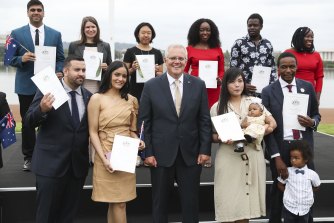 Mr Morrison ended his speech with a poem titled My Land Australia by his daughter Lily.

Victorian Premier Daniel Andrews also paid tribute to healthcare workers after a year where “we have had a lot to deal with as a state”.

“And with that sense of unity, with that fundamental recognition that together Victorians and indeed Australians can achieve anything, we have been through so, so much,” he said at a flag raising ceremony at Government House in Melbourne.