Vegan activists invaded a McDonald’s in protest against ‘speciesism’ before security guards dragged them out in front of stunned diners.

The animal rights protesters filmed themselves marching into the fast-food shop in Brighton, East Sussex, before the guard tries to push them out, destroys their poster and drags one along the floor by his foot.

The members of Direct Action Everywhere Brighton held up a placard reading ‘it’s not food, it’s violence’ and chanted for ‘animal liberation’ while a customer told them that the food ‘tastes lovely’. 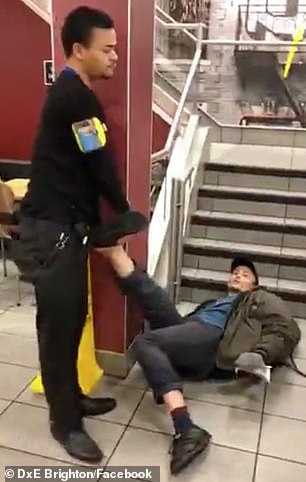 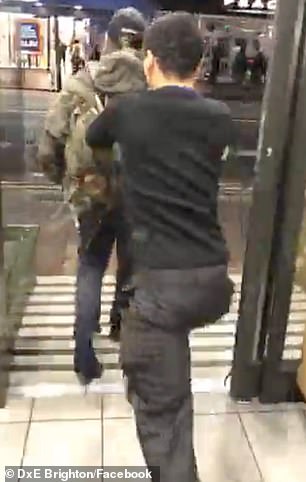 Vegan activists have invaded a McDonald’s in Brighton to protest against ‘speciesism’. They were dragged out by security guards in front of stunned diners 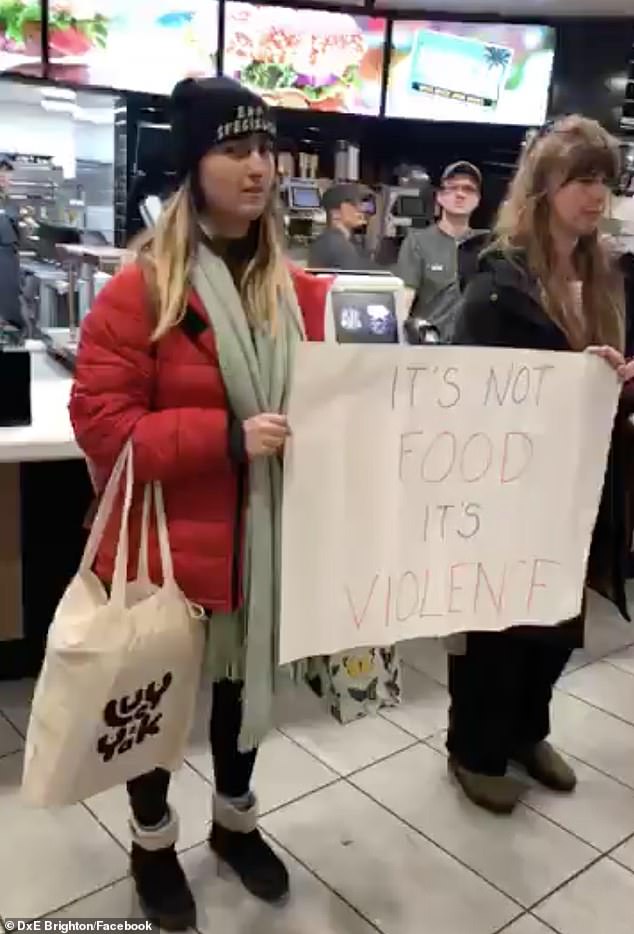 Footage shows the vegan protesters walk into the restaurant and hold up a placard that brands the restaurant’s food as ‘violence’.

The group, numbering about five individuals, then chanted for ‘animal liberation’ and encouraged diners to think about what they were eating before a security guard dragged a member out the restaurant.

The guard also destroyed the protesters sign and dragged another protester out of the door before telling the rest to ‘get out’ of the shop.

This is the third time the group has targeted this McDonald’s store this year.

One of the male activists was filmed saying: ‘We are here today to draw attention to speciesism and the normalised violence that is happening here right now.

‘We say we are a nation of animal lovers, yet we abuse, mutilate, exploit and kill non-human animals every single day.’ 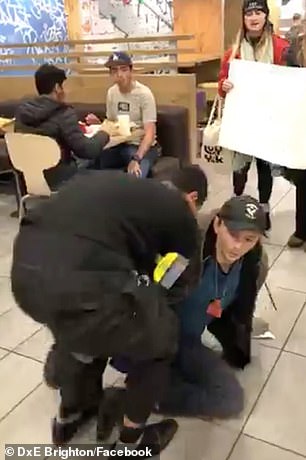 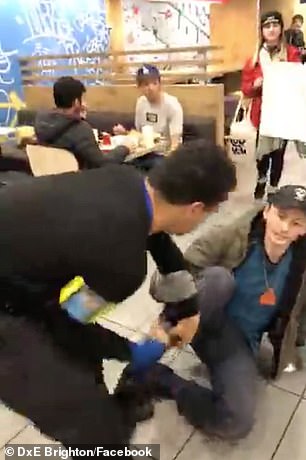 Video from the restaurant, which the activists have protested at three times this year, showed an activist being dragged across the floor 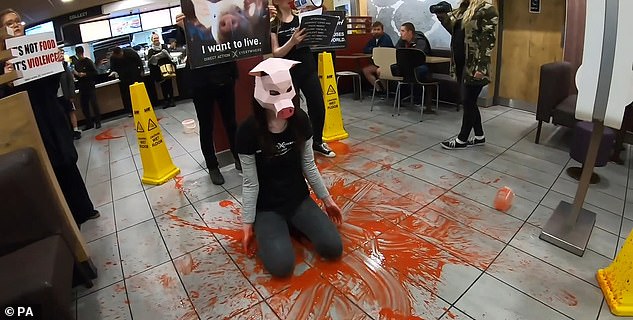 Vegan protester Dylan Roffey, 24, wore a pigs mask and covered the floor in fake blood in May to protest against the restaurant’s treatment of animals

A DxE Brighton spokesman said: ‘It is no surprise that when attempting to peacefully disrupt violence towards innocent animals, we are met with so much aggression and violence.

‘This place only exists because the customers are kept in the dark about the abuse that occurs to the animals who are held captive inside dark sheds.

‘We will keep returning to places that objectify animals and take their rights from them until animals get protection under law and the justice they deserve.’

A McDonald’s spokesman said: ‘We can confirm that an incident took place in our London Road restaurant.

‘The safety and security of our employees and customers is our absolute priority.

‘The restaurant remained open and we are assisting police with their enquiries.’

In May a vegan protester wore a pigs mask and covered herself in fake blood at the same McDonald’s to protest against the fast food chain’s treatment of animals.

Dylan Roffey, 24, was one of around twenty activists who stormed the store and was removed by police officers after emergency services were called.

She was convicted of causing criminal damage at Brighton Magistrates’ court in September and ordered to pay £50 compensation to McDonald’s as well as £250 court costs and £85 victim surcharge. 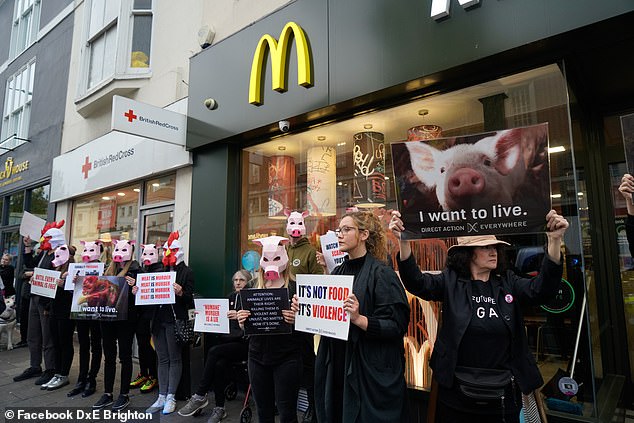 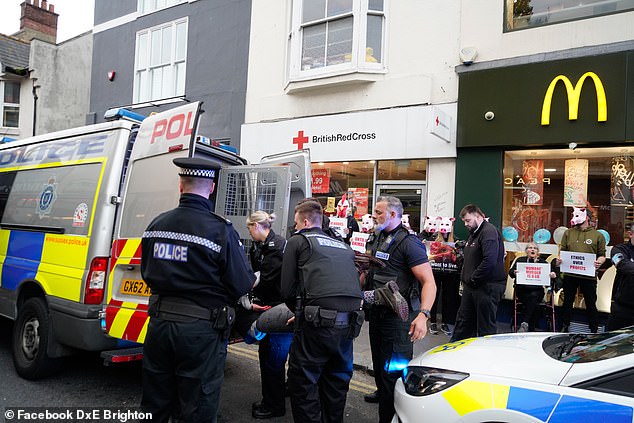 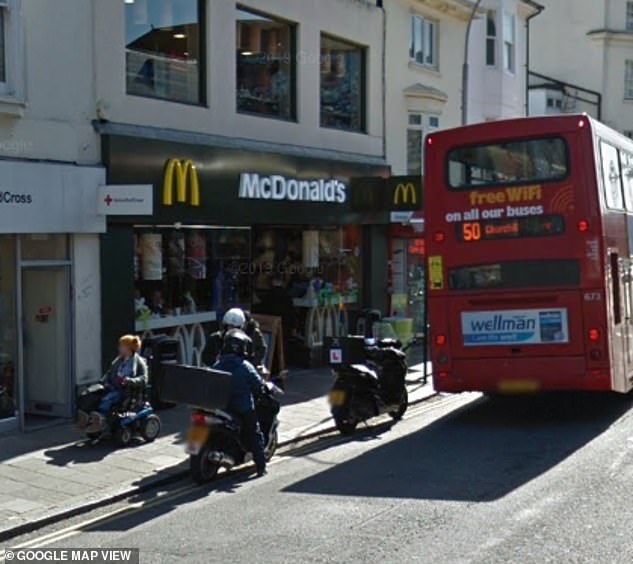 The activist has also been sentenced to 150 hours unpaid work for spitting on a woman at Brighton station after noticing that she was wearing a £750 Canada Goose fur coat.

She told FEMAIL in September that the court’s decision was ‘ridiculous’ and accused the legal system of ‘wasting public money’.

‘I think it’s ridiculous that people’s time and money was spent on people who are trying to save lives, instead of doing something about people who are profiting from people being killed,’ she said, referring to the animals.

‘I don’t think people should be arrested for protests, or for having basic compassion, and that thinking that killing non-human people is an unacceptable thing to do.’

The footage was taken on Saturday last week. Chloe Sims calls Pete Wicks an 'a***hole' after not talking for months
We and our partners use cookies on this site to improve our service, perform analytics, personalize advertising, measure advertising performance, and remember website preferences.Ok