Vegan sausages and burgers might soon have to change their names if a new law is passed by the EU parliament this week.

European ministers are due to vote this week on laws that would ban vegan producers from using words linked to meat products.

If the law passes, then ‘burger’, ‘sausage’, ‘escalope’, ‘steak’ and ‘schnitzel’ would be among the terms reserved solely for products containing meat.

And it could mean the appearance of ‘vegan tubes’ or ‘veggie discs’ on supermarket shelves in the near future. 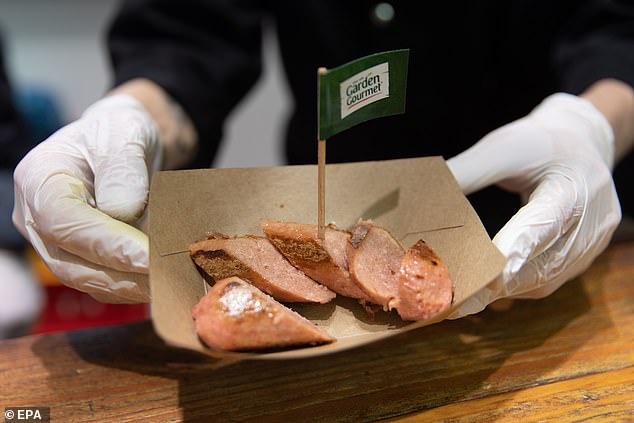 EU ministers are due to vote this week on new laws that would ban the use of ‘meat’ terms such as sausage and burger being applied to non-meat products (pictured, a vegan ‘sausage’)

Terms such as ‘soy milk’ and ‘vegan cheese’ are already banned in the EU, but the new laws would take the ban further.

It would also outlaw the use of ‘milk-like’ or ‘cheese-like’ on labels, unless the items contained dairy products.

Britain would be able to opt out of the law if it passes, because it is leaving the EU.

But British ministers could choose to adopt the measures, and UK farmers exporting to the EU would be forced to abide by the rules.

European farmers say the change is necessary to protect the branding of meat products, and to stop customers being misled.

But doctors and environmentalists say a ban risks sending out the wrong message about eating non-meat products, which should be encouraged.

‘Just as we all know that peanut butter does not contain butter, consumers know exactly what they are getting when they buy veggie burgers or veggie sausages,’ Alex Gromminger from the ProVeg food advocacy group.

Hervé Salomon, director for France of veggie butter-maker Upfield, called the proposal ‘totally absurd’ and said it went against everything the EU is trying to achieve in terms of lowering pollution in farming.

But Jean-Pierre Fleury, of the EU’s farmers association Copa and Cogeca, called the misuse of meat labels ‘an obvious case of cultural hijacking.’

Speaking earlier this month, he said: ‘We are about to create a brave new world where marketing is disconnected from the real nature of products, which is just asking for things to spin out of control.’

Vegetarian and vegan products have soared in popularity in recent years, amid heightened concern over the environmental impact of meat farming and animal welfare, and a focus on healthy eating. 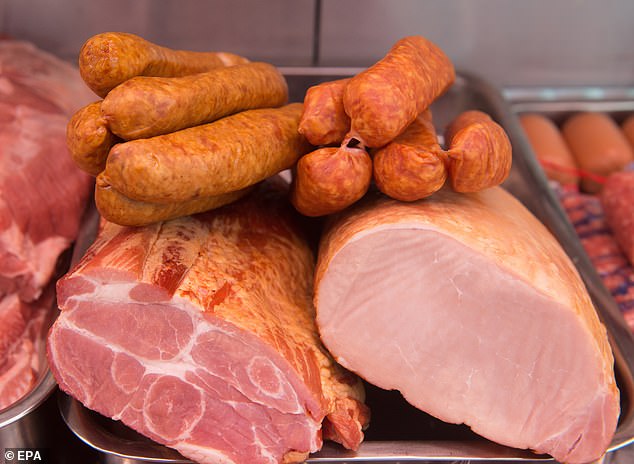 Meat farmers say the new laws are necessary to stop consumers getting ‘confused’ about what they are buying, by environmentalists  and doctors say it will send the wrong message

The number of full-time vegans in Britain more than doubled between 2016 and 2019 to 600,000, surveys by the Vegan Society showed, while an estimated 1.3million more are vegetarian.

An even larger number of people are thought to be cutting their overall meat consumption without eliminating it entirely, or going ‘part-time’ vegan.

The move led to 3.6million fewer animals being slaughtered in the UK in the first half of 2019 compared to the year before.

Sales of red meat and pork also fell in supermarkets, by 4 per cent and 6.4 per cent respectively, while sales of meat-free alternatives rose by 18 per cent.

The trend is thought to have accelerated amid lockdowns, as people’s habits were forcibly broken, giving them the opportunity to change long-held habits.

Meatless Farm, a well-known maker of vegan products, say sales rise 179 per cent in the first half of 2020, compared to the year before.

The Vegan Society says 20 per cent of Britons reduced meat consumption during lockdown, with 15 per cent doing the same for eggs or dairy.

Market research firm Mintel says 12 per cent of us have found vegan diets more attractive since the pandemic started, rising to a quarter of people in their twenties.

Spending on groceries rose by 14 per cent overall in lockdown – as people ate more at home with restaurants and pubs closed.

But spending on vegan products far outstripped that, with vegan sausages up 21 per cent, burgers up 37 per cent, mince up 50.1 per cent and tofu up 81.7 per cent.