The Venezuelan city where running water comes only once a month

The Venezuelan city where nothing works: Running water comes once a month and cash machines are empty – as president Maduro finally admits his socialist economic policies have ‘FAILED’

This is the Venezuelan city where beleaguered residents endure daily blackouts, empty cash machines and dismal public transport amid economic turmoil in the country.

Running water only comes once a month in San Juan de los Morros while, food, medicines and sanitary products are in short supply.

Overcrowded buses regularly take hours to arrive with passengers describing how they have to ‘punch and kick’ their way on board.

Far from being a remote village outpost, San Juan has a population of 160,000 inhabitants and is just 90 miles southwest of the capital Caracas.

With the country in the grip of  acute economic and political turbulence, under-fire President Nicolas Maduro finally admitted his socialist economic policies had ‘failed’. Running water only comes once a month in San Juan de los Morros while, food, medicines and sanitary products are in short supply. A woman is pictured filling up containers at a pumping station in the city in July 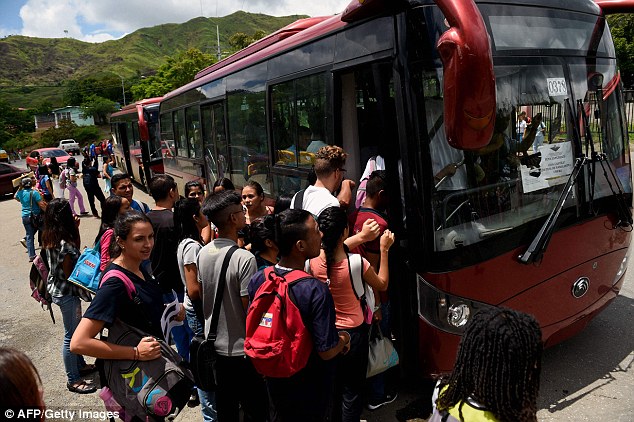 San Juan de los Morros is being crippled by economic turmoil in the country with beleaguered residents enduring daily blackouts, empty cash machines and dismal public transport. Some have described having to fight their way on to buses just to get around. Students are pictured trying to get on a full bus outside the Romulo Gallegos University in July 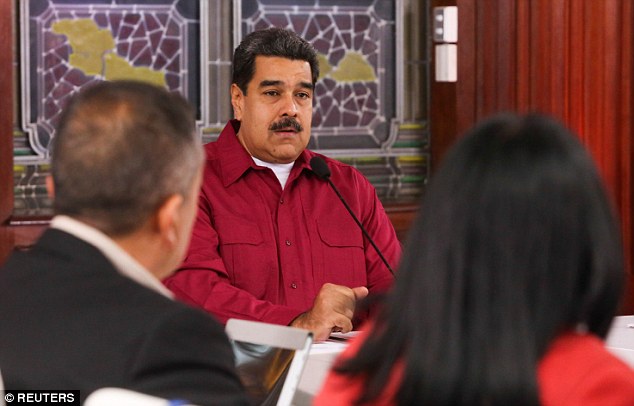 With the country in the grip of acute economic and political turbulence, under-fire President Nicolas Maduro (centre, yesterday) finally admitted his socialist economic policies had ‘failed’

This came in the wake of food and medicine shortages and public service paralysis, such as Tuesday’s power failure that affected 80 percent of Caracas.

‘The production models we’ve tried so far have failed and the responsibility is ours, mine and yours,’ Maduro told his ruling PSUV party congress, as Venezuela looks to tackle chronic inflation the International Monetary Fund predicted would reach one million percent this year.

The socialist government has over recent years nationalized various industry sectors such as cement and steel, expropriated hundreds of businesses, including supermarket chains, and lately brought in the army to control street markets to guard against rising prices.

It has also fixed prices on various goods and imposed a monopoly on foreign exchange.

As well as the IMF’s mind-boggling inflation prediction, it says Venezuela’s GDP will plummet 18 percent this year, meaning a fourth consecutive year of double-digit falls.

The economic crisis has hit so hard that the public transport system has almost ground to a halt, with the government and local councils offering free rides in unsafe and uncomfortable pick-up trucks – branded ‘kennels’ by users – after many bus service providers couldn’t afford to keep their vehicles on the road.

Maduro, who blames Venezuela’s woes on an ‘economic war’ waged by the United States, called on PSUV supporters to help kick-start production and resist US ‘aggression.’ Students try to get on a full bus outside the Romulo Gallegos University, in San Juan de los Morros. People regularly wait hours for public transportation 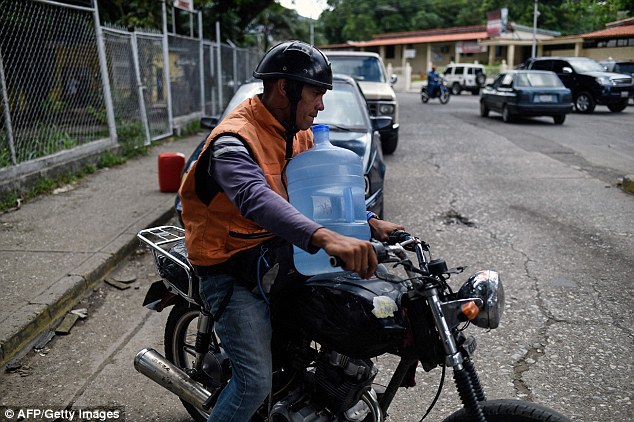 Running water only comes once a month in San Juan de los Morros while, food, medicines and sanitary products are in short supply. A man is pictured loading a water jerrycan on a motorbike after visiting a pumping station

Washington has imposed financial sanctions against Maduro and top government officials, as well as the state-owned oil company PDVSA. Venezuela’s crude oil sales account for some 96 percent of the country’s revenue.

Industry is operating at just 30 percent, perhaps best reflected by the farming sector which supplies barely a quarter of national consumption having provided 75 percent a few years ago, the National Farmers Federation said.

In San Juan, Florimar Nieves, a 39-year-old primary school teacher said of life in the city: ‘They send (running) water once a month. The rest of the time we have to buy it.

‘There have been times where we’ve had no electricity for 24 hours.’

Nieves lives with her two daughters and a granddaughter on the outskirts of San Juan, in a neighborhood of small, unfinished houses, dirt roads and skinny dogs.

She spends a quarter of her income buying water while her medical student daughter has to go to a neighbor’s house to use the internet.

Yet protests in San Juan are as scarce as food, medicines and sanitary products.

Many residents seem resigned to their fate. Some collect rain water, while others pray that frequent power cuts won’t damage their electrical appliances. 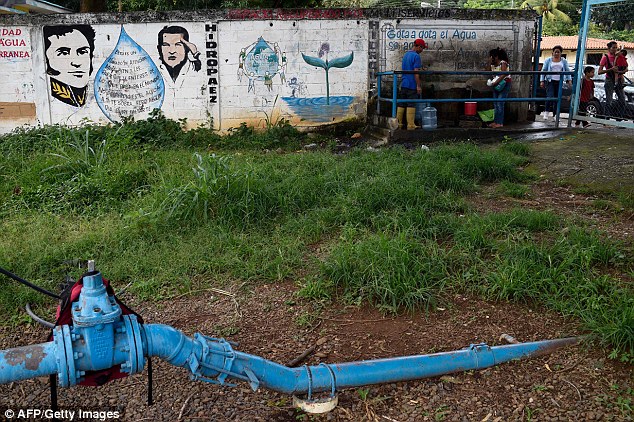 Far from being a remote village outpost, San Juan has a population of 160,000 inhabitants and is just 90 miles southwest of the capital Caracas. Pictures show people queuing just to collect water at a pumping station 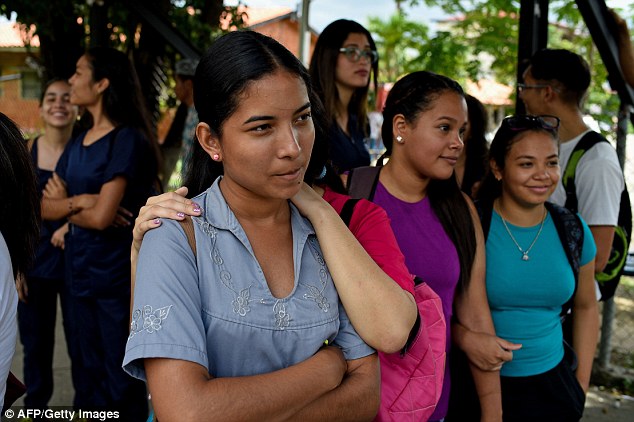 Cash has practically vanished from circulation throughout the country, but in San Juan the cash machines don’t work anyway and residents have to queue for hours at banks to withdraw money. Pictured: Students wait for a bus at a stop outside the Romulo Gallegos University 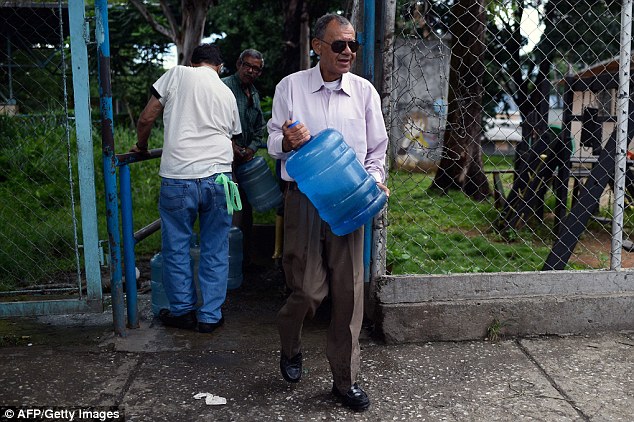 Venezuela’s economic crisis that saw the International Monetary Fund predict inflation would reach one million percent this year, has hit San Juan hard. Men are pictured carrying water away from a pumping station

And this in the country that was once one of the top 10 oil producers in the world.

Adults and children alike, dressed in shabby, ill-fitting clothes, walk long distances to get to work or school, tired of waiting hours for one of the few buses still running.

Those who cannot buy water and haven’t received any for weeks face trips to the ‘tap’ in the center of town, supplied by a system of pipes leading from a well.

‘We come here two or three times a week. We haven’t had water for 12 days,’ said Arelis Oliveros as she filled up several containers.

The problem has reached such desperate levels that 17-year-old Alejandro often washes in rain water because his grandfather’s house, where he lives, regularly goes days without receiving water.

‘Sometimes I get fed up with washing this way because I smell bad, so I treat myself, blowing 10,000 bolivars on the bus to go and wash at my mother’s house,’ he said.

It’s luxury in a country where the currency is losing value at such an alarming rate that the largest denomination bank note, 100,000 bolivars, which once would buy five kilograms (11 pounds) of rice, is barely enough for a single cigarette.

Cash has practically vanished from circulation throughout the country, but in San Juan the cash machines don’t work anyway and residents have to queue for hours at banks to withdraw money.

In any case, they are only allowed to withdraw a maximum of 100,000 bolivars, half the price of single egg.

President Nicolas Maduro’s government has announced it will try to ward off economic collapse by stripping five zeros off the currency, but a similar move by his predecessor Hugo Chavez 10 years ago – he knocked off three – didn’t stop the country descending into today’s crisis. President Nicolas Maduro’s government has announced it will try to ward off economic collapse by stripping five zeros off the currency, but a similar move by his predecessor Hugo Chavez 10 years ago – he knocked off three – didn’t stop the country descending into today’s crisis. This was the scene as people queued for water in San Juan in July Bus passengers have described having to jostles with up to 100 people to try to board. Students are pictured waiting at a stop outside a San Juan university Earlier this week, Maduro admitted he and his government were at fault for failing public services. He vowed to quadruple oil production, which has dropped from a high of 3.2 million barrels a day 10 years ago to a 30-year low of 1.5 million in 2018, but predicted it would take two years to see ‘the first symptoms’ of ‘economic prosperity.’

That won’t cheer the residents of San Juan, though.

Carolina Azuaje, a 17-year-old medical student, leaves home at 6:00 am to try to get on one of the free buses supplied by her university, but often has to wait hours to do so.

‘You have to punch and kick your way onto the bus,’ she said. ‘Last week, I broke a finger.’

It’s no exaggeration. When the bus arrives, she jostles with around 100 people to try to board. Many don’t make it, but most just laugh.

Nieves says there’s no point complaining as it will only lead to greater hardship. When people do protest the lack of services, they are threatened with the loss of food subsidies while the government and military ‘lash out against them.’ 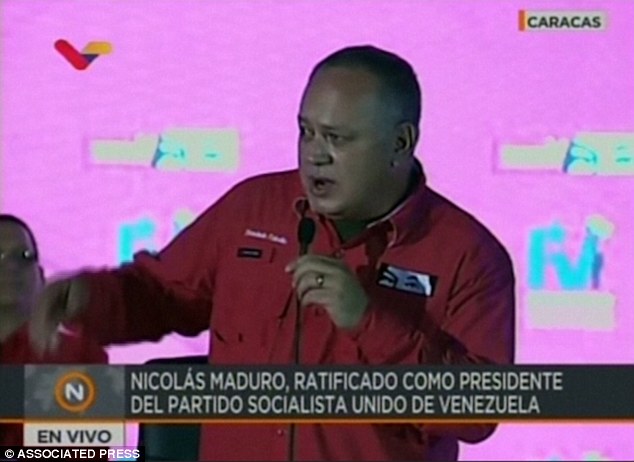 Former national assembly speaker Diosdado Cabello was rallying support for president Nicolas Maduro at a hotel in Caracas, Venezuela when a blackout happened A black out plunged the event into darkness, causing a live television transmission to be cut off for 20 minutes 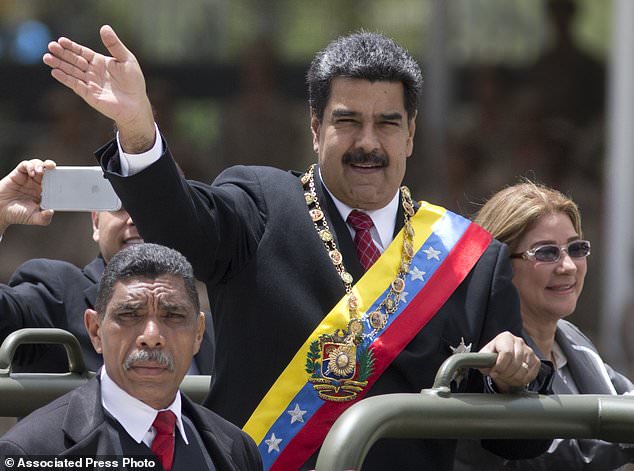 Maduro, seen here at a military parade in July, blamed opposition for the act of ‘sabotage’ saying that no other parts of the hotel experienced a power cut

Sociologist Francisco Coello says parts of society have accepted the crisis because ‘they’ve not seen anything else’ after two decades of chavista governments.

Maduro usually blames opposition ‘sabotage’ for the failings but the government ‘has left the population in the biggest orphanage, with two options: leave the country or depend on benefits,’ said Cuello.

‘An underfed and uneducated population ensures that the regime stays in power.’

Nieves is thinking about joining hundreds of thousands of others in fleeing the country.

‘Living in Venezuela is a struggle, an anguish, a great despair,’ she sobbed.

Yesterday it was reported that Venezuela’s president was humiliated after a blackout struck the moment he was set to be elected leader of the socialist party at a hotel in Caracas.

Maduro blamed the opposition party for their act of ‘sabotage’ claiming no other parts of the building suffered a power cut.

It happened when former national assembly speaker Diosdado Cabello was addressing socialists at an annual gathering. 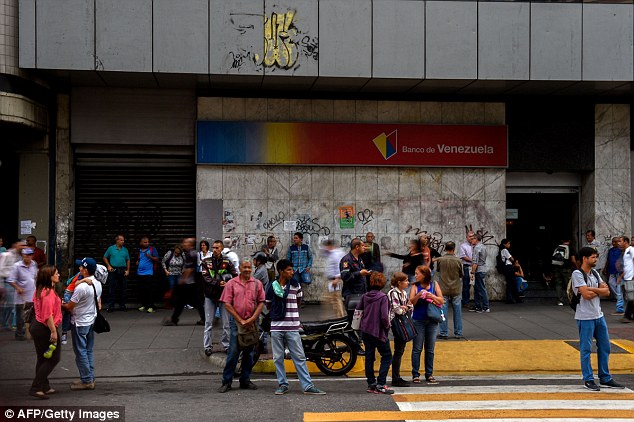 The main clock of Caracas, located at the city’s emblematic building ‘La Previsora’, remains off during the power outage

Cabello was urging delegates to support Maduro to ‘strengthen the party and revolution’.

But as he raised a hand and asked others to follow suit in electing the dictator, the lights went out a live television transmission was cut off.

After about 20 minutes the event went back on air.

Most of Venezuela’s capital was left without power a day later following a failure at an electrical plant that paralysed metro lines.