Speaking at a debate in Florence with three other candidates for the European Commission presidency, the Belgian MEP claimed the European Union is still “a confederation of nation states” and lacks the stamina to tackle international issues concretely as they present themselves. Mr Verhofstadt added he envisages the Brussels bloc gaining new “character” under his leadership for the next five years.

He said: “This may be a little bit provocative but today the European Union doesn’t exist.

“It’s still a confederation of nation-states that is mainly decided by unanimity.

“And it’s always acting too little too late when something is happening, for example, the financial crisis at the other side of the Atlantic Ocean.

“There will be a timeslot of five years to really change this nature of the character of the European Union and to make it a real one.” 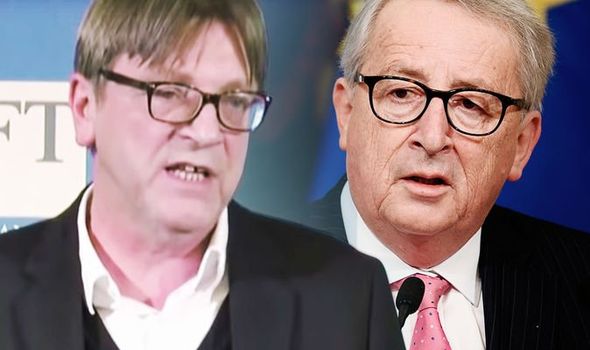 The Belgian MEP will join senior Liberal Democrat politicians on the campaign trail in London.

Mr Verhofstadt has been one of Brexit’s most ardent opponents in his role as the European Parliament’s Brexit co-ordinator, and has even spoken out against the lengthy delay handed to Theresa May.

He fears that the prolongation of Brexit only hands eurosceptics the opportunity to use the distraction to “undermine the EU”.

The Lib Dems, who are looking to build on their local election gains, are part of Mr Verhofstadt’s ALDE bloc of liberal MEPs in the EU Parliament.

Ahead of his British mission, Mr Verhofstadt said: “I regret the long extension to Article 50 as it postpones a decision, whether that is the agreement of a withdrawal agreement, a revocation, or putting the issue back to the people and distracts Europe from addressing other challenges like migration.

“My fear is that nationalists and populists across Europe are using the Brexit distraction, a catfight in the Tory Party that got out of control, to further undermine the EU.”

He also accused politicians of wasting the Article 50 extension, as Theresa May and Jeremy Corbyn’s cross-party talks show little signs of a result.

“If European Elections do go ahead in the UK, it is imperative pro-Europeans come out and vote, as it will be elsewhere across Europe,” Mr Verhofstadt said.