Victorians racing back to the state from Queensland on Saturday to avoid a potential border lockdown have faced repeated flight cancellations and extraordinarily high ticket prices.

Victoria closed the border at 11:59pm on Friday to anyone who had been in a Queensland ‘red zone’ – Brisbane City Council, Redland City Council, Ipswich City Council, Moreton Bay Regional Council and Logan City Council areas – on or after January 2. 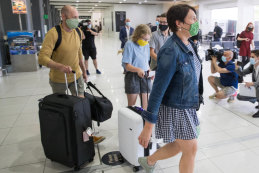 Stu and Sally McAleese with their children Patrick, 13, and Orla, 11, at Melbourne Airport on Saturday morning. Credit:Jason South

Any passengers coming off flights from Greater Brisbane from Saturday will be forced into hotel quarantine.

Victorians who have returned from Queensland since January 2 will need to get a coronavirus test and isolate until Monday, with health authorities warning residents to "reconsider" travel to the sunshine state.

The Queensland Government instated a three-day lockdown of Greater Brisbane on Wednesday, following the discovery of COVID-positive hotel cleaner carrying the more-transmissible UK strain of the virus, with the woman visiting different parts of the city until testing positive on Wednesday.

Jetstar flights from Brisbane to Melbourne were cancelled on Saturday, leaving many Victorians struggling to get home.

Officer couple Steph Dugina and James Tomich said it was the frantic calls from family members in Victoria that made them come home from their holiday a day early.

Instead of visiting Dreamworld with four other Melbourne friends as planned, the pair spent a “stressful” night refreshing their phones and rebooking cancelled Jetstar flights three times over.

“We were just watching the cancellation messages come through. We didn’t know whether to risk paying for more flights or not,” Ms Dugina said. 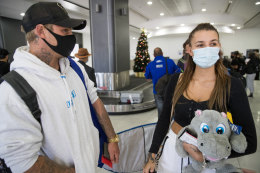 “Then we booked with Virgin and just stayed up all night, waiting for it to be gone too.

“My mum said she wouldn’t sleep until we were actually on the plane – she was so relieved when I gave her a quick call to say we’d boarded.

“There’s a testing place just next to us, so we’ll just get tested and then go home.”

Those flying from Queensland had their ID checked before and after they got off the flight, and were greeted by rows of authorised officers in full personal protective equipment. 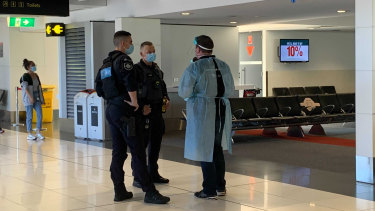 Authorised officers and Australian Federal Police at the Melbourne Airport on Saturday morning.

But travellers who flew into Melbourne Airport on Saturday morning said they were not explicitly told while on the flight or afterwards by authorised officers whether they needed to be tested for COVID-19 or isolate.

Peter Bentley had travelled to Queensland for a family member’s funeral but only spent a single day in Caloundra on Queensland’s Sunshine Coast before booking a return flight.

Staying less than 40 kilometres the Moreton Bay Council, which has now been declared a ‘Red Zone’, he was worried if he didn’t leave the state he would be stuck there indefinitely. 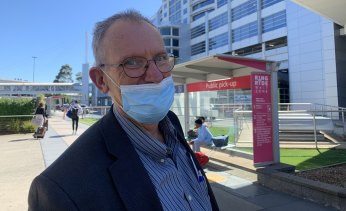 Peter Bentley came back from the Sunshine Coast after just a day.Credit:Jason South

“I thought if they were going to proceed to shut down the Sunshine Coast, I’d be locked up there,” Mr Bentley said.

“I looked up flights coming back from the Sunshine Coast (on Saturday), and tickets were up to $1160, so I then had to fly through Brisbane.

“It was good when I got here that they had a big team of people checking ID.”

GP Sally McAleese and her husband Stu raced back from the Gold Coast hinterlands with their children Orla, 11, and Patrick, 13, fearing Victoria would close the border to Queensland swiftly “like they did for New South Wales”. 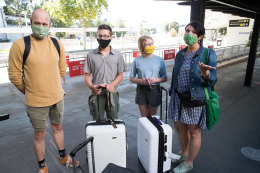 Stu and Sally McAleese with their children Patrick, 13, and Orla, 11, at Melbourne Airport on Saturday morning. Credit:Jason South

“As soon as we saw the news breaking, we decided to get out. We just didn’t want to get stuck there, to be honest,” Mr McAleese said. 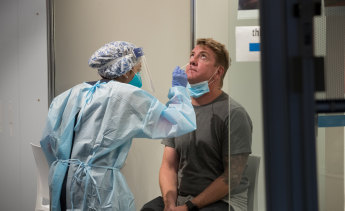 Passengers are tested at Melbourne Airport on Saturday.Credit:Jason South

Dr McAleese said they “didn’t realise the border had shut” to those from Greater Brisbane overnight.

“It was very stressful, just not knowing what was going to happen. Even on the plane, we weren’t sure if we would have to hotel quarantine,” she said.

“There was a lot of people there to meet us off the plane, they were asking lots of questions … like what we did during our time, so they could trace us if there was any issue.

“There weren’t necessarily any checks, but you would assume everyone was being honest.”

Virgin Airlines said on Friday night it was operating Queensland services as usual but planned to make changes after the hotspot declaration.

The airline asked passengers travelling within the next three days to avoid calling and to visit its website instead as border restrictions were an "evolving situation".

Health Minister Martin Foley urged Victorians not to go to the five local government areas in Greater Brisbane across the next three days “in the interests of everybody”. 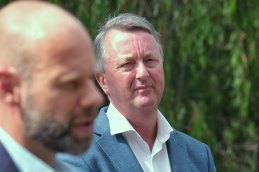 “The Queensland government, backed by the Prime Minister, have made it clear they are doing a short, sharp, three-day lockdown to deal with these issues, so as to allow the contact tracing teams to get on top of it," he said at a press conference on Saturday afternoon. 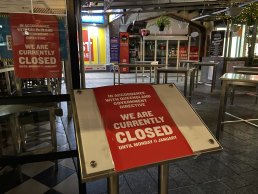 “As we have established through this pandemic this virus does not respect state borders or holiday plans, it creates real havoc with the best-laid plans of Victorians and Australians."