IT only takes an exploding firework or slammed car door to drag former airman John Nichol back three decades to the bombs peppering Baghdad.

A haunting reminder of dark nights when, shivering in a Iraqi cell, the waves of allied warplanes unleashed an incendiary storm that seemed to creep ever closer. 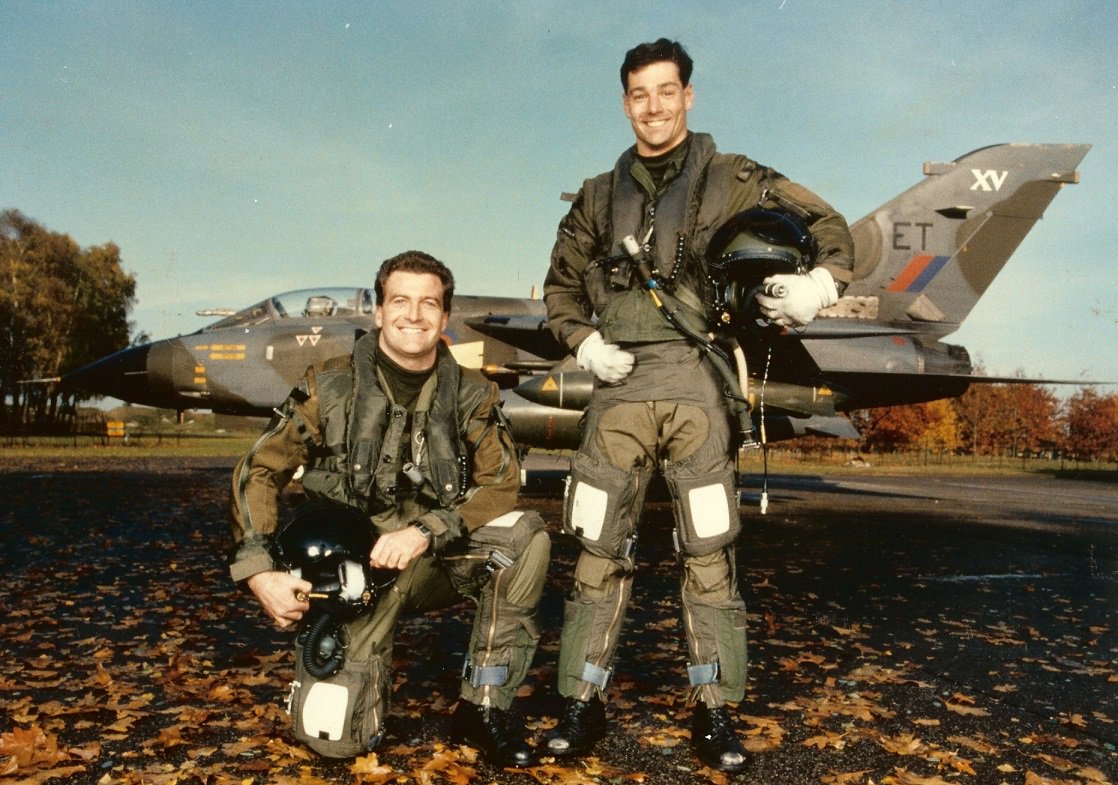 By rights it should have been Nichol carrying out sorties over Saddam Hussein’s Iraq as Gulf War One raged.

Instead, he was cowering in a cell after being shot from the skies and paraded on world’s TV screens for Geneva Convention-denying propaganda.

Battered and bruised pictures of the RAF navigator and his pilot John Peters became the defining images of the 1991 conflict, immortalised in The Sun’s front page splash headlined "Bastards of Baghdad". 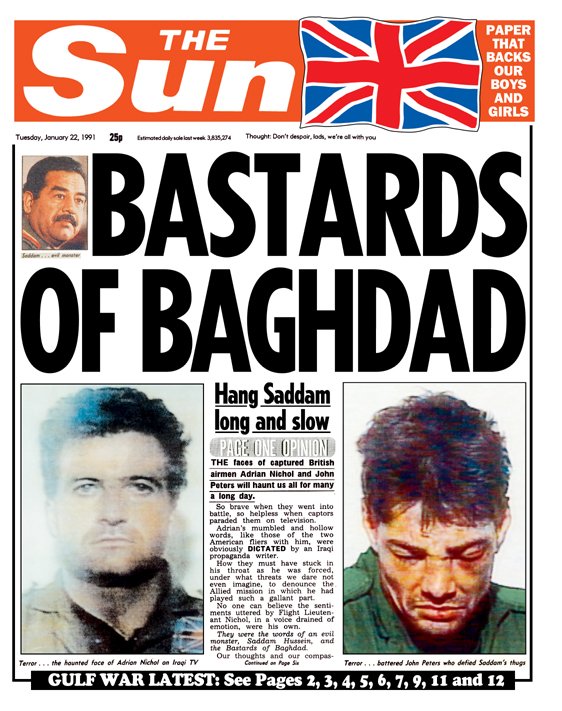 Today, 30 years since the war officially ended, the dad-of-one and best selling author reveals: “Being paraded on TV was the worst moment of my life.

“A moment I still think of with shame and regret. I felt I was letting the side down by giving into torture and death threats.

“But my life wouldn’t have turned out the way it has but for those pictures.”

Three dead, four tortured and only one escaped

Another man coming face to face with his destiny three decades ago was an SAS sergeant from Peckham who would go on to be known by his pen name Andy McNab.

McNab and seven others from the Bravo Two Zero patrol were behind enemy lines trying to knock out Saddam Hussein’s scud missile launchers menacing Israel.

Sheltering in a dry river bed amid the lunar-like desertscape, the special forces unit heard the hollers of a young Iraqi goat herd. 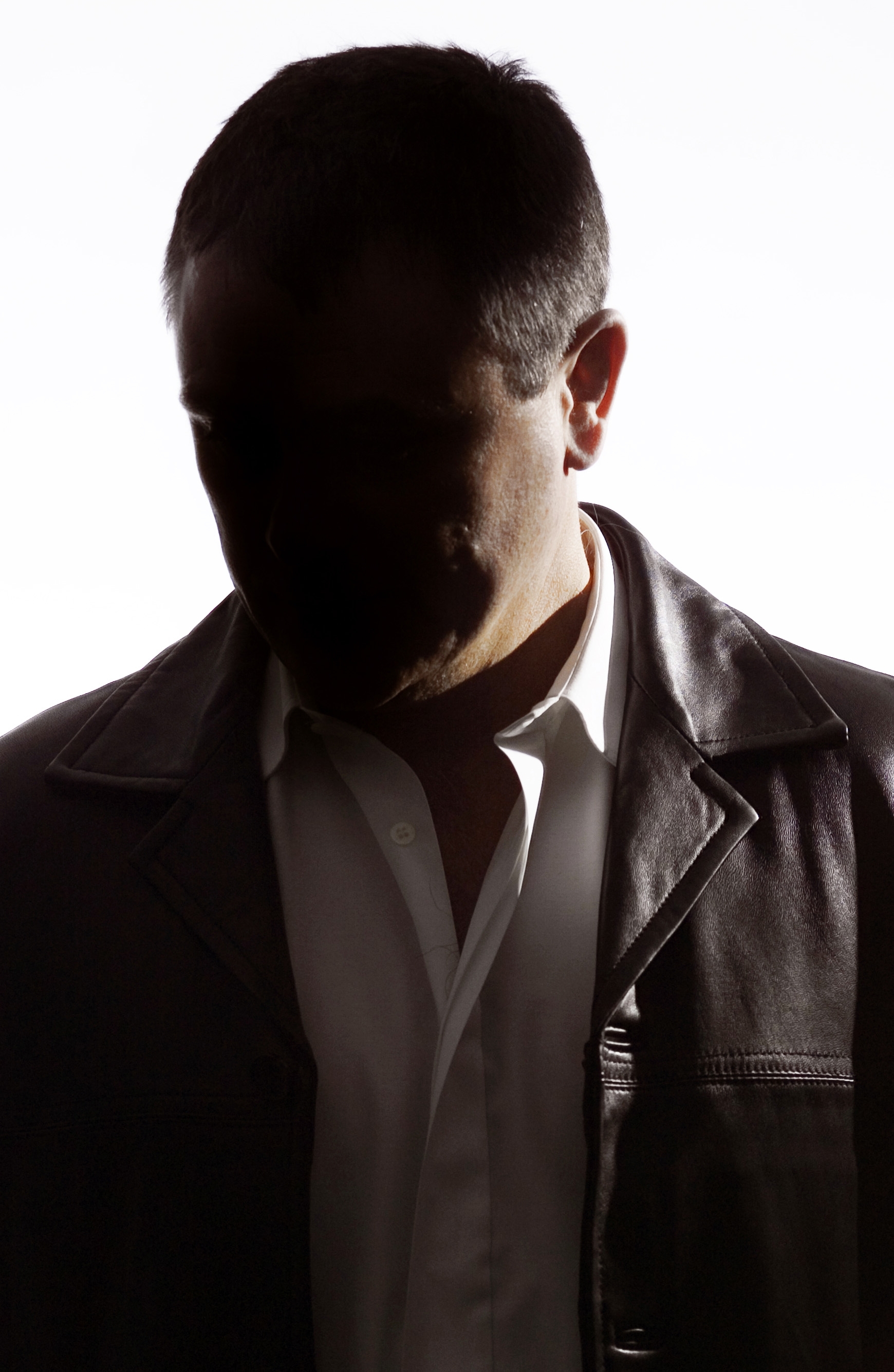 Three decades on and the moment is seared into McNab’s soul: “It’s really vivid.

“We were in a dip in the ground and the Iraqi lad was getting closer with his goats.

“All of a sudden he looked into the dip and there were eight guys pointing guns at him. He thought f*** this and started running.”

Compromised, the unit split and headed on foot to cover the 99 miles to the safety of the Syrian border pursued by the Iraqi military.

Three of the SAS men died, four were captured and tortured – including McNab – and only one escaped.

For both McNab and Nichol the Gulf War One was the defining moment in their lives.

Yet the 30th anniversary of the conflict has been met with little fanfare nationally.

Despite accomplishing its mission of dislodging Saddam from Kuwait, it remains overshadowed by the tragic failures of the second Bush/Blair 2003 invasion of Iraq.

John Nichol says: “It was the last truly successful conflict. People have forgotten what the first Gulf War was about.”

On August 2, 1990, tyrant Saddam Hussein had ordered the invasion and brutal occupation of neighbouring Kuwait in a row over oil and loans.

US President G W Bush put together a 39-nation coalition of 670,000 troops to liberate Kuwait with full backing from the United Nations.

Bush said: “Iraq will not be permitted to annex Kuwait. That's not a threat or a boast that’s just the way it's going to be.” 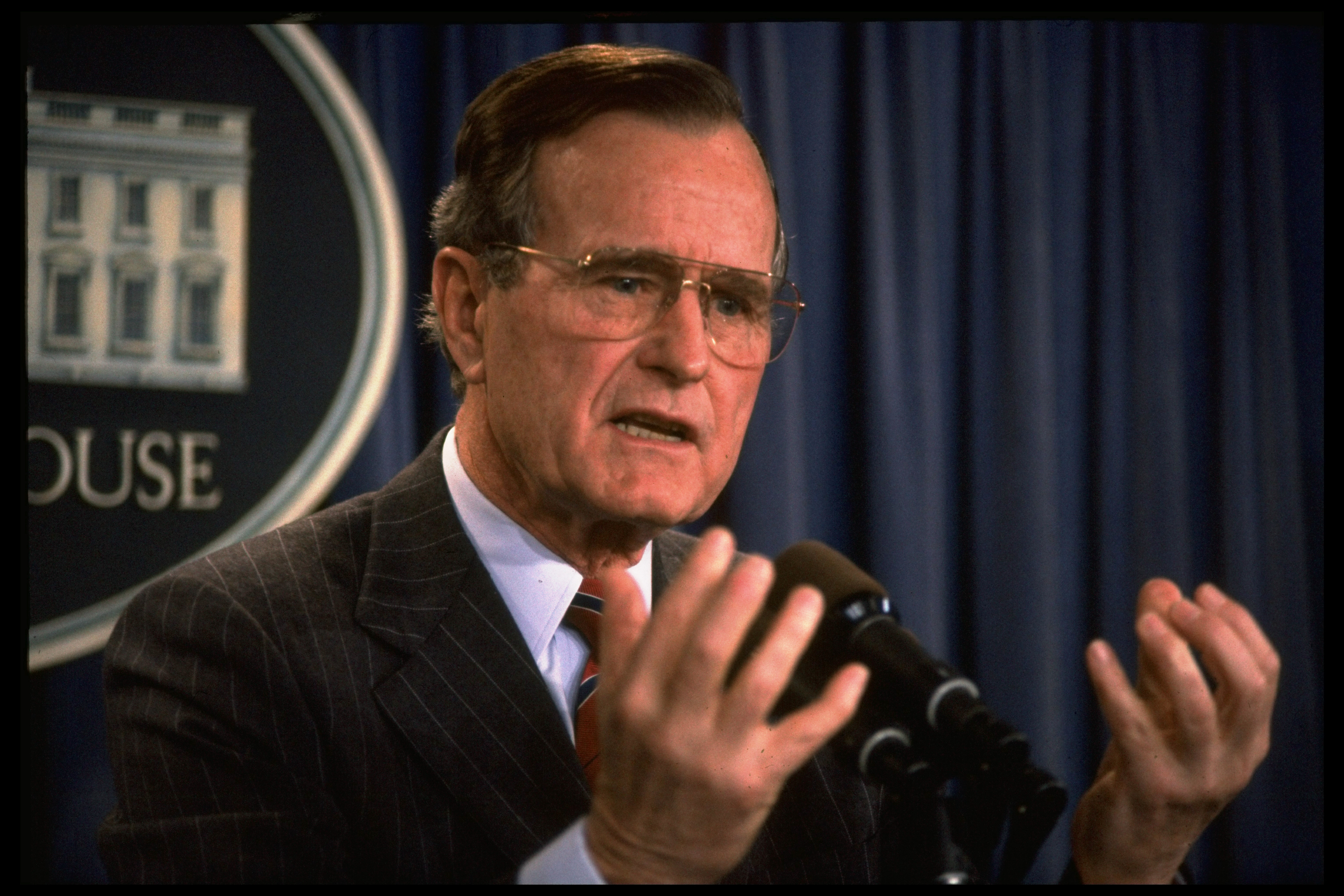 British Major-General Patrick Cordingley, the 7th Armoured Brigade's commanding officer in the war codenamed Operation Desert Storm, said the "cause was both just and legal".

John Nichol, now 57, adds: “The world came together under UN resolutions to evict Iraq from Kuwait.

“I accept that oil came into the picture, you’d be naive to think otherwise.

“If Kuwait and Iraq had exported bananas I doubt whether all this would have happened.”

Gulf War One was a conventional battle of massed soldiers and tonnes of military hardware that Western military had been planning for decades during the Cold War. 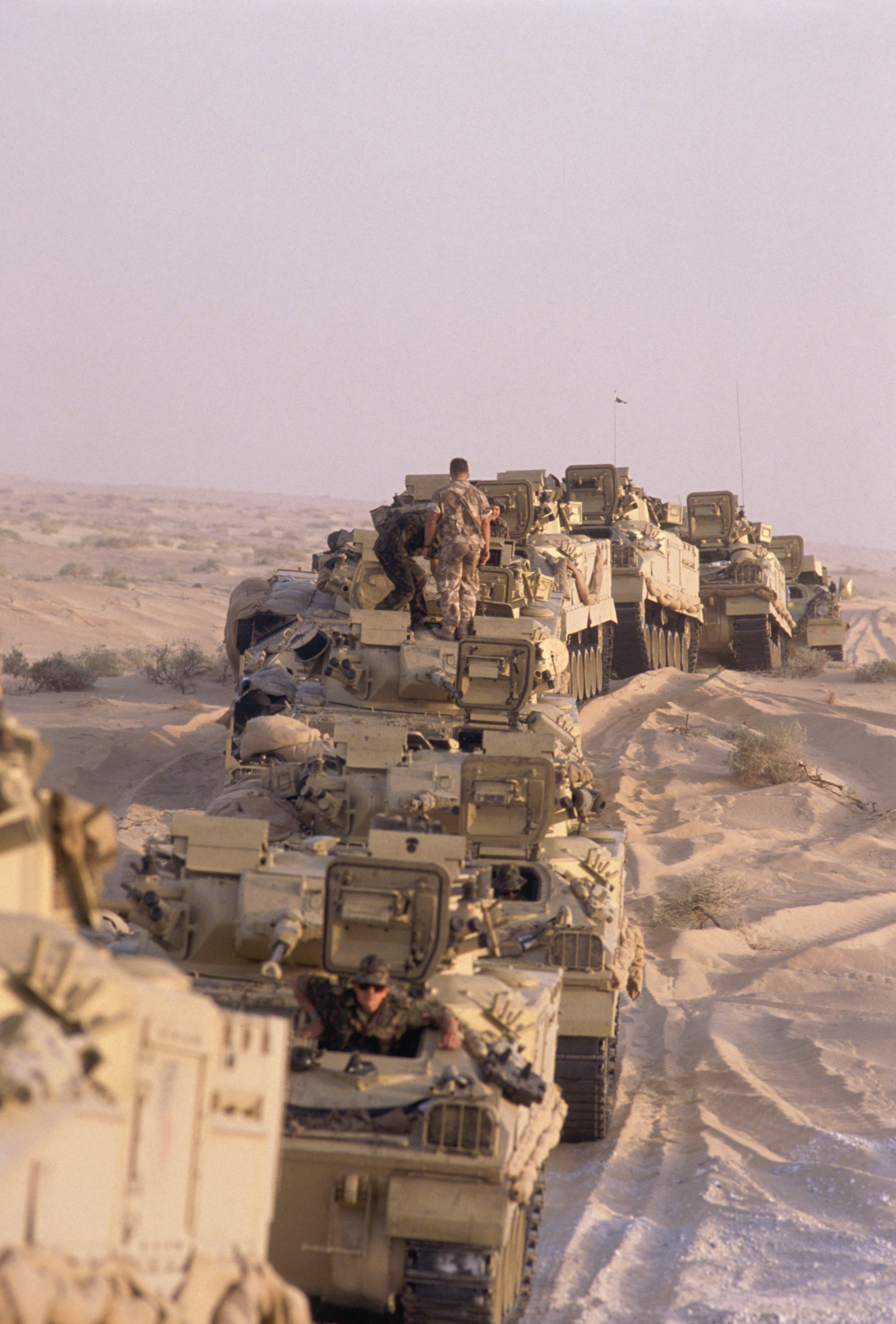 In later conflicts in Iraq and Afghanistan it would be replaced by murky so-called asymmetric warfare of insurgency and terror attacks.

It cost over £2bn with most of the tab picked up by Saudi Arabia and Kuwait. Some £200 million of British kit was lost or written off.

There was a constant fear that Saddam would use his stockpile of chemical weapons against coalition troops.

There were many false alarms but the Iraqi despot didn’t repeat his chemical attack on the Kurds in Halabja in 1988 which killed as many as 5,000. 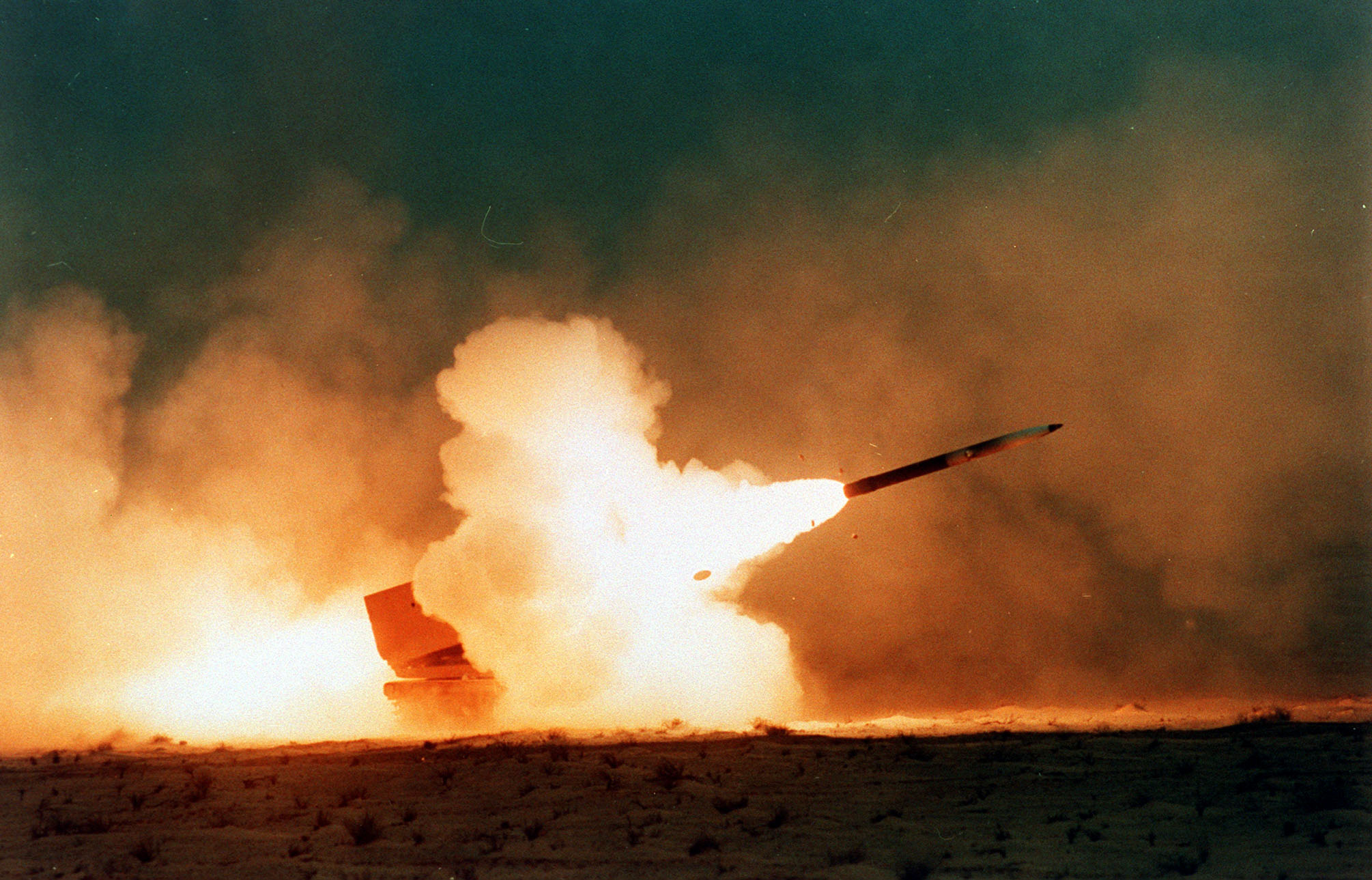 Gulf War One was the first truly televised war with audiences astonished by the accuracy of a new generation of smart bombs and precision guided munitions.

RAF man John Nichol adds: “You had reporters on the ground filming aircraft taking off, and landing, which went live on air.

“It was astonishing and brand new. Journalists were living in the hotel with the aircrew and buying them beers.”

One of the defining moments in British coverage was when the BBC’s John Simpson breathlessly told the nation a cruise missile had just flown past his Baghdad hotel window and was "turning left at the traffic lights".

BBC World Affairs Editor Simpson said recently: “An entire new generation of weapons were used and it was quite extraordinary. They were very, very precise.

“They were used when there were failures and civilians were killed which happened  fairly often.

“It was almost always a failure of intelligence rather than the equipment or the technology.” 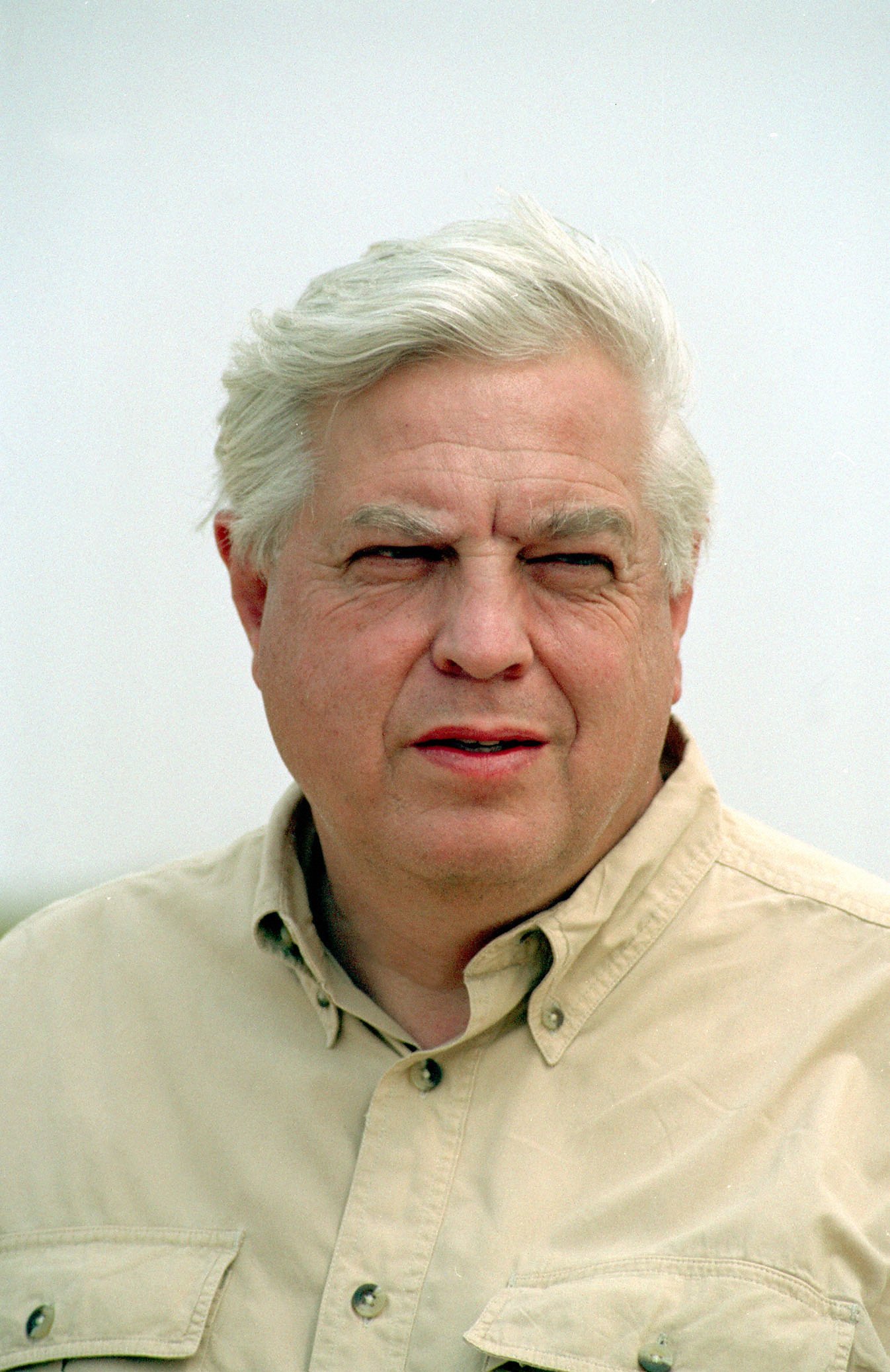 Allied commander General Norman ‘Stormin’ Schwarzkopf gave a famous news conference in which he showed a video of a laser-guided bomb destroying a bridge just after the vehicle had driven over it. He described the driver as "the luckiest man in Iraq".

McNab told The Sun: “It was so-called Stand Off weaponary that won it. Military love it because it puts fewer lives at risk.

“Like in all wars technology jumps ahead at warp speed because of the necessity to use it.

“So in Gulf War One you’ve got a more precise way of attacking and 24 hour news telling you what was going on. You were watching in some cases live precision bombing."

The mother of all battles is under way

The allied war machine was unleashed in the early hours on January 17, 1991, with a massive aerial bombardment involving cruise missiles launched from US warships and US, British and Saudi Arabian fighter planes, bombers and helicopters.

Saddam recklessly boasted: "The great showdown has begun! The mother of all battles is under way.” 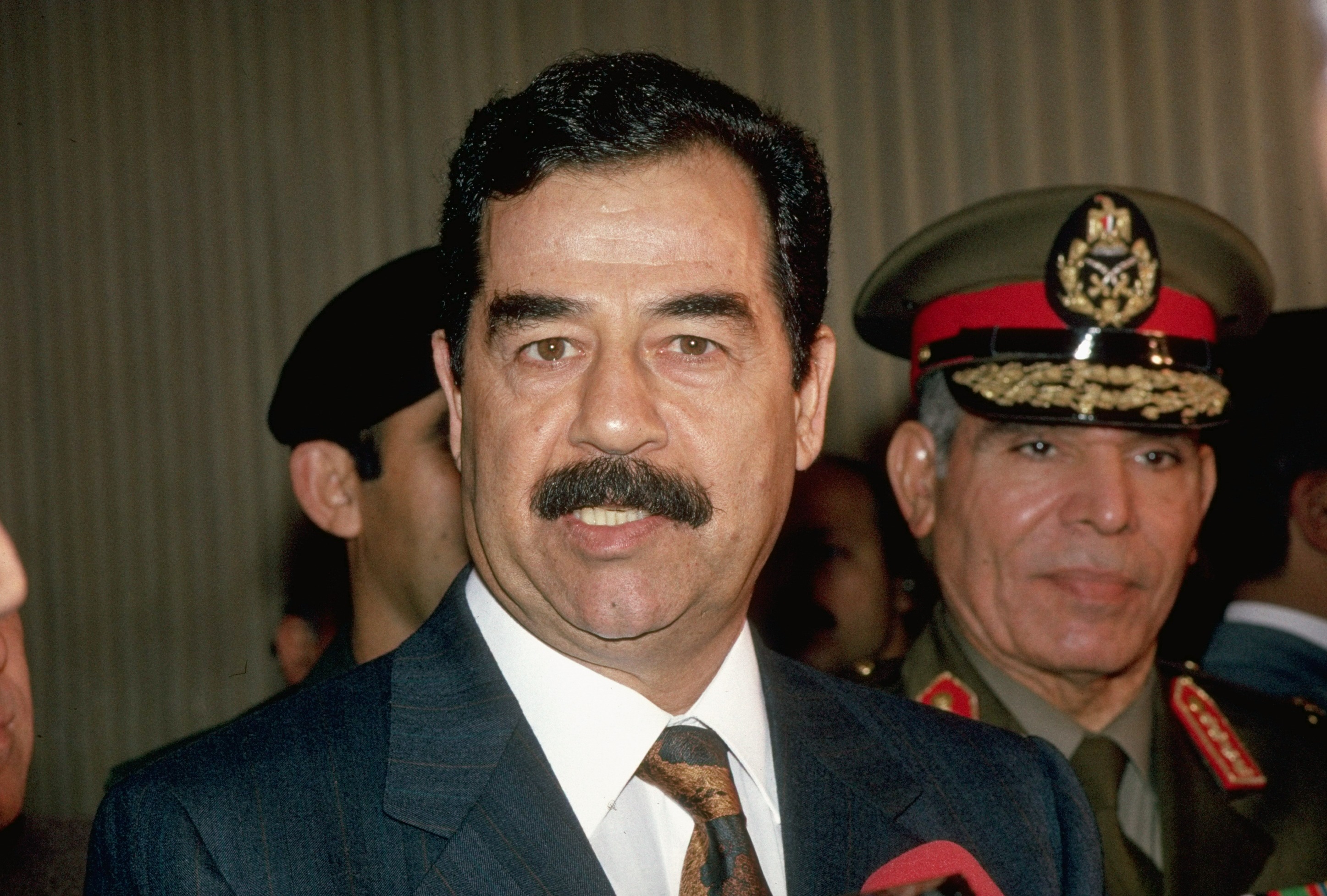 In the first 24 hours, more than a thousand allied sorties were flown. The main targets were military, but the capital Baghdad was heavily hit and there were many civilian casualties.

One of those sorties Nichol’s RAF Tornado was skimming the parched Iraqi desert at around 620mph and as low as 200ft when it was struck by a heat-seeking missile.

Nichol would later remember the moment as like being hit by a “supersonic telegraph pole”. 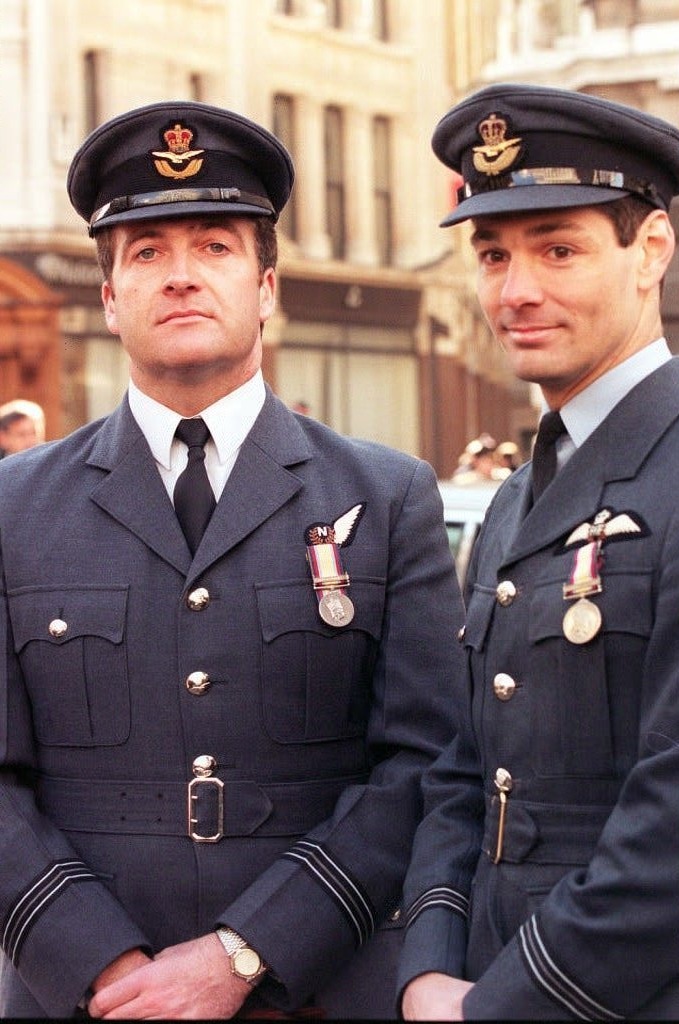 He and pilot John Peters were ejected from the flaming Tornado in just under a second and at 18 times the force of gravity.

Nichol said: "It was my one and only attack of the Gulf War. Eventually, after some pretty brutal treatment, we appeared on Iraqi TV and then spent the rest of the war as prisoners of war."

The North Shields-born airman added: “The pictures of John and I on TV became one of the defining images of what was a cruel and hideous regime.

“But the real heroes – the people who should have had their images everywhere – were the aircrew flying operations day after day knowing what had happened to us.”

Iraq responded to the ongoing air onslaught by firing scud missiles at Israel and Saudi Arabia.

Saddam wanted to provoke Israel into retaliation hoping it would encourage Arab neighbours to support his flailing war effort.

When 13 Israelis died as a result of scud attacks it was decided the SAS would be dropped behind enemy lines to take out the missile batteries.

Bravo Two Zero – compromised by the goatherd – failed in its objectives but became the most decorated group of soldiers since Rorke’s Drift in the Anglo-Zulu War.

Under fire and in freezing temperatures, McNab and his men attempted to trek the 99 miles to Syria. Only one made it.

Caught in a drainage ditch a mile and a half from safety, McNab was then subjected to weeks of brutal torture.

I was punched, kicked and beaten with a rifle butt

He would say later: “During my six weeks in captivity I was punched, kicked and beaten with a rifle butt.

“I had my teeth extracted with pliers and was burned with a red-hot spoon by my interrogators.”

Meanwhile Saddam’s army – then the fourth largest in the world – was being pulled from the skies. 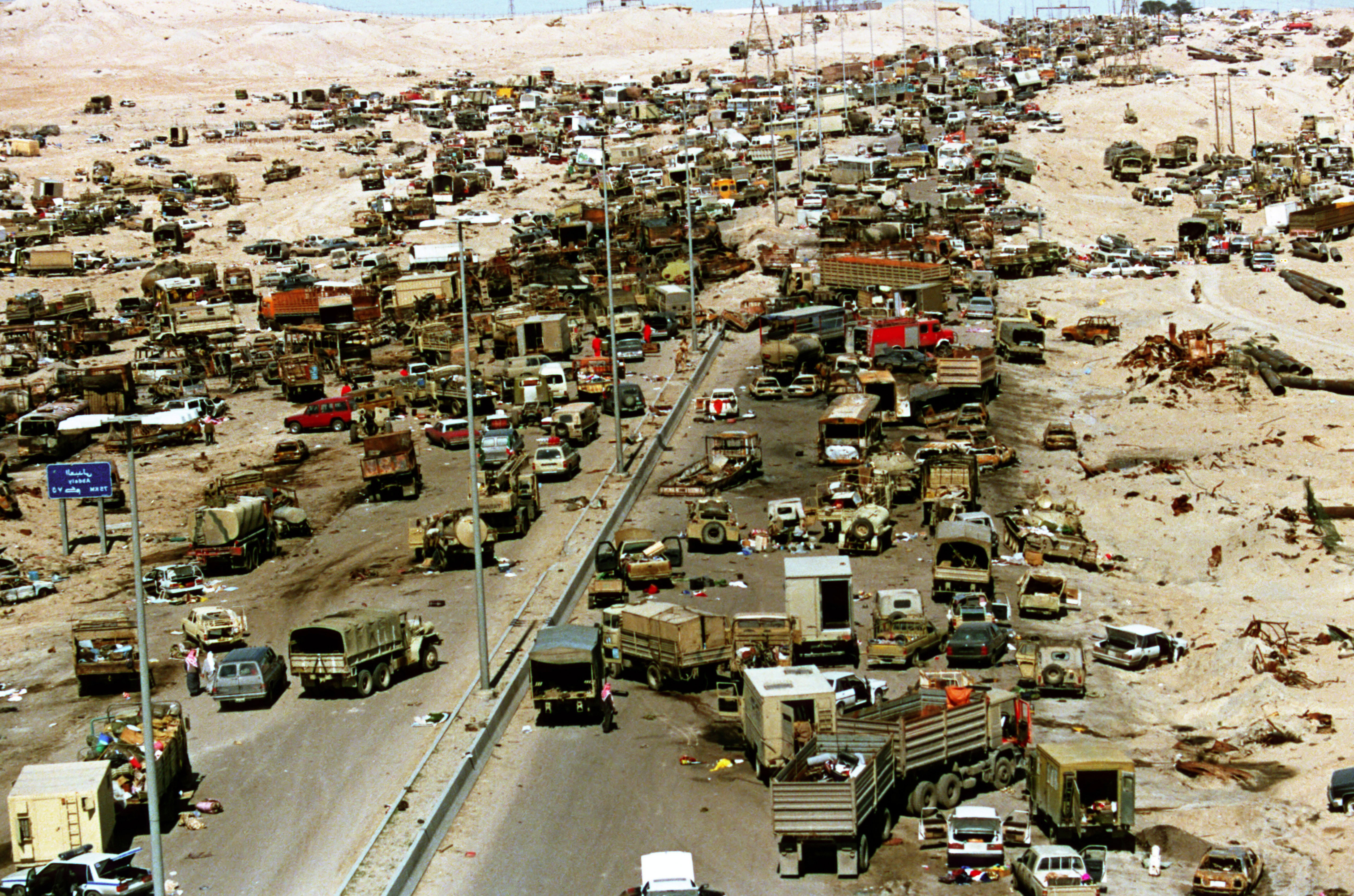 Ten days later a ground war was launched – spearheaded by the SAS – and lasted just 100 hours before Kuwait was liberated.

The allies suffered 293 fatalities during the war, including 47 British personnel.

According to the Imperial War Museum, between 20,000 and 35,000 Iraqi soldiers died during the ground war.

Many Britons who served suffered afterwards with debilitating Gulf War Syndrome and PTSD.

McNab added: “There's a lot of suffering that's gone on for years.

“Lots of service people, quite rightly, felt they had been discarded afterwards.”

Gulf War One ended with President Bush declaring victory on February 28, 1991. Both Nichol and McNab were released five days later.

McNab’s memoir of the Bravo Two Zero mission would go on to be the biggest selling military book of all time. The adaption of his best-selling novel SAS: Red Notice premieres on Sky Movies on March 12.

Nichol, whose 17th book Tornado, is published in June, added: “I look back with pride at the force I was part of, not my involvement because I didn’t do anything.

“It was primarily an air war but for all the coalition troops it was an astonishing achievement of logistics, military power, bravery and courage.

“I also think of the friends I lost – the people who didn’t come home – there were quite a few of them.”

So could McNab forgive the goatherd that compromised his patrol?

“He’s probably a dad himself now with loads of kids, if he survived the second Iraq war,” he said.

“If we met again, I would shake his hand, no problem at all.”