One of the world's largest lithium-ion batteries will be built in Victoria as part of a state government-backed initiative to bolster the reliability of the grid and keep a lid on power prices as coal-fired generators retire.

The Victorian Big Battery, to be built north of Geelong by French renewable energy giant Neoen, would have a 300-megawatt capacity, making it three times the initial size of the Tesla big battery built by US billionaire Elon Musk in conjunction with Neoen in South Australia in 2017. 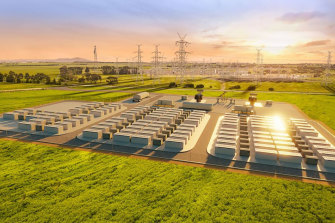 Victoria’s Big Battery will be double the size of the famous Tesla battery in South Australia.Credit:Neoen

"Three years ago, we were thinking, 'Wow, 100 megawatts, that's huge for a battery, the first of its kind'," Neoen Australia managing director Louis de Sambucy told The Age.

"We couldn't imagine that just two or three years later we would be building something three times bigger."

Across Australia and around the world, big batteries are emerging as key to supporting the greater uptake of renewable energy by overcoming the problem of intermittency when it is not sunny or windy. Batteries capture and store excess power created during times when conditions for renewable energy are most favourable, then release it when it's needed during peak-usage periods such as heatwaves. 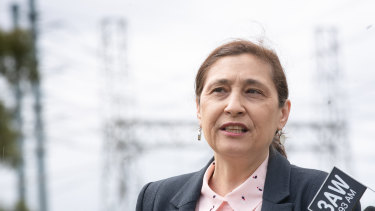 Victorian Energy Minister Lily D'Ambrosio said the new Tesla battery – which has the ability to discharge about a quarter as much power as some coal-fired power generators – would lower wholesale power prices and bills.

Neoen's South Australian battery project is estimated to have achieved $150 million in savings in its first two years.

"The big battery will help protect our network in summer, create jobs and drive down energy prices as well as supporting our recovery from the coronavirus pandemic," Ms D'Ambrosio said, adding that it would support 85 jobs while it was being built.

Part of the battery's capacity will help to reduce the strain on the grid during peak periods, especially in summer, by increasing the flow of power through the Victoria-NSW interconnector by 250 megawatts.

The Australian Energy Market Operator ran a tender for the project on behalf of the state government. "This contract is really critical for the economics of this project," Mr de Sambucy said.

Energy experts on Thursday questioned the Andrews government's decision to intervene in the market, noting that AEMO forecasts did not predict any reliability concerns in the state for nearly a decade.

"This is not justified on the basis of reliability," Grattan Institute energy director Tony Wood said.

"But if [Victoria] wants extra summer 'insurance', what this could do is provide a buffer during those really nasty times. And in terms of government interventions, this is on the more benign side."

When fully charged, the new battery would be empty in an 1½ hours, Mr Wood said. "But an hour and a half at peak times might help get you through just that extra bit," he said.

Representatives for Australia's largest electricity and gas providers said the Andrews government's proposal was a "bad idea", which lacked independent scrutiny of costs and benefits or clarity on how it would participate in the energy market.

"This battery will be funded by Victorian consumers whether or not it proves useful," Australian Energy Council chief Sarah McNamara said. "It will also impact private investment decisions made in good faith within that framework."

The Clean Energy Council, which represents renewable energy providers, said Tesla and Neoen's Hornsdale big battery in South Australia had proven its worth by rapidly stablising the grid.

"Batteries are really valuable in helping to manage the system, whether it's storm events, coal-fired power plants or to support the varied nature of renewables, chief executive Kane Thornton said.

The battery would provide half of the statewide storage capacity needed to prepare for the closure of the Latrobe Valley's Yallourn coal-fired power station, Environment Victoria chief executive Jono La Nauz said. Yallourn is due to close in 2032, but is widely considered at risk of closing earlier.

"This announcement is another example of how the energy transition will bring jobs to regional areas," Mr La Nauze said. "We're looking forward to seeing more job-creating climate solutions included in the Victorian budget."

Federal Energy and Emissions Reduction Minister Angus Taylor said the Morrison government was investing in battery projects that enhanced grid security, but stressed batteries were "not a cost-competitive option" to replace gas and hydro power as firming for renewables, or to replace coal as the provider of Victorian baseload power. Julia Roberts, 53, is still very much a Pretty Woman in Hawaii Holly Willoughby 'is earning £30,000 a WEEK'
We and our partners use cookies on this site to improve our service, perform analytics, personalize advertising, measure advertising performance, and remember website preferences.Ok