Just 202 of the new locally acquired cases have been connected to the current outbreak, according to a Department of Health statement released on Twitter. 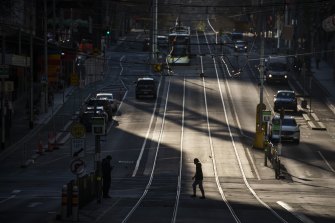 There were 30,032 vaccination doses administered across the state on Sunday, with more than 49,000 test results returned. Victoria now has 3507 active cases of the virus.

Health authorities have listed four childcare centres as tier-1 exposure sites, meaning children, staff and parents who visited the sites will need to isolate for 14 days.

Little Learners Early Education & Kindergarten in South Morang, in Melbourne’s north-east, is listed as an exposure site across various times on September 2, 3 and 6.

Ilim Learning Sanctuary Glenroy in the northern suburbs was visited by a positive case on September 3, and then on consecutive days between September 6 and September 8.

Children aged 12 to 15 eligible for Pfizer

In Victoria, children aged 12 to 15 years will be able to get vaccinated against COVID-19 from Monday.

Infectious diseases physician Associate Professor Paul Griffin said new data from the National Centre for Immunisation Research and Surveillance noted two per cent of children who catch COVID-19 are hospitalised, so it’s still “really important to protect our children so they don’t get unwell”.

“There is great data showing these vaccines work, even down as young as six months of age now. So, it won’t be long, I think, and most countries will include children in their strategies.”