Victoria has recorded 79 new local cases on Friday, as two more regional towns were added to the state’s list of exposure sites for the first time during the recent outbreak.

Of the new cases, 53 have been linked to known clusters.

The Department of Health will provide more case information later this morning, with daily department tweets containing no added detail about how many new locally acquired cases were in the community while infectious.

More than 50,500 test results were returned on Thursday, while 33,611 vaccination doses were administered across the state.

The figures come as more exposures sites emerged in large regional towns along the NSW border, including Echuca, Kyabram, and Shepparton. 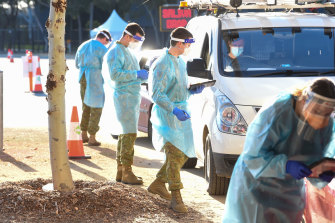 The Sir Ian McLennan Centre in Mooroopna, near Shepparton, has been added as a new tier-1 site.

Independent MP for Shepparton Suzanna Sheed said with hundreds of hospital staff in the region furloughed due to exposure sites and a major local supermarket closed on Friday, many “vulnerable” people have been left stranded.

Ms Sheed said the issue of getting food and pantry items to people in Shepparton and Mooroopna was exacerbated by the fact that many supermarket delivery drivers – more than 40 from one Shepparton depot – were also required to isolate.

“A whole range of things that are really practical, day to day things that have pretty much ground to a halt,” she told 3AW Breakfast.

“There’s a whole vulnerable group in our community of disadvantaged people who are really needing food assistance,” she said. “And while there are many organisations working in that space, one of the problems we have is that so many of our volunteers are in lockdown too.“

Borgcraft in Altona was also added as a tier-1 site.

Meanwhile, Barwon Health confirmed late on Thursday night it was working with the Department of Health to investigate new exposure sites at a supermarket and a kebab shop in the city, with “with contact tracing underway”.