State school staff will seek to ban Andrews government MPs from setting foot on school grounds from Tuesday, as the teachers’ union ramps up its campaign for better pay and conditions. 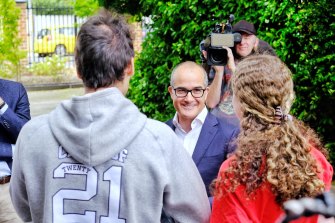 Teachers will also disrupt the statewide effort to shift NAPLAN from paper to online in time for next year’s test by refusing to conduct trial tests for students for the rest of this term.

Though the Australian Education Union cannot literally ban a government MP from visiting a school, it has directed members to instantly begin a one-hour stop-work if one does. Union members have also been encouraged “to wear red and protest at the front of the school” if a government minister visits their school.

“These visits disrupt scheduled student learning, and create workload for principals and other staff, whilst politicians get free media they can use to promote themselves in their
electorate,” Victorian branch president Meredith Peace said.

It is one of three new actions government school staff will take from Tuesday in an industrial campaign that has so far stopped short of striking, though Fair Work has granted union members permission to strike as part of their campaign.

They will also refuse to progress NAPLAN online school-readiness testing, an essential part of the standardised test’s transition from paper to online.

All Australian schools are due to sit the test online next year, but Victoria is already lagging behind other states in making the switch.

Each school’s completion of the program “is crucial in ensuring all schools are sufficiently prepared to deliver the tests online”, the Victorian Curriculum and Assessment Authority said.

About 60 per cent of Victorian schools have not yet moved to NAPLAN online. They have until December 15 to complete the online readiness tests, which require students to complete a 42-minute writing test and a 45-minute test of reading, language conventions and numeracy.

The union claims the ban will be a win for students, giving them more time to be taught by their teachers “rather than complete a trial test that is not connected to their learning”.

Education support staff will also refuse to do any work on their unpaid lunch breaks.

The AEU and the Department of Education and Training have been negotiating over a new Victorian government schools agreement since May.

The union’s log of claims includes three annual salary increases of 7 per cent, 16.5 per cent annual superannuation, limiting class sizes to a maximum of 20 students and reductions in face-to-face teaching time.

School staff have already launched partial bans on attending meetings, responding to the department emails or implementing the Framework for Improving Student Outcomes, a pet state government project for schools.

Union members have been warned that the department could dock their pay for engaging in stop-work action.

An Andrews government spokesperson said: “We will continue to negotiate in good faith with our hard-working teachers and school staff.”