Victoria’s politicians have been rattled. They are, one parliamentary insider said, “jittery”.

The ugly side to the protests against the state government’s proposed pandemic legislation – the nooses, gallows and signs likening Premier Daniel Andrews to Adolf Hitler – has been well reported but behind the scenes, it has been uglier still. 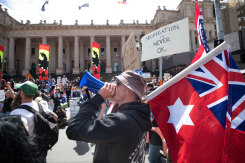 The Sunday Age spoke to insiders from half-a-dozen political parties and all said they had experienced nothing to compare with the current level of abuse from the public.

On Friday, authorities intercepted a suspicious package outside Health Minister Martin Foley’s office. Police said on Saturday that “the investigation remains ongoing” after they carried out security checks at Mr Foley’s office on Friday.

MPs’ offices have been swamped with emails, phone calls and letters, in co-ordinated campaigns to convince them to block the government’s pandemic bill, which is due to return to Victoria’s upper house on Tuesday.

Some politicians are now avoiding crowds. One MP’s office has been forced to call police regarding credible threats against their boss seven times in the past six weeks. 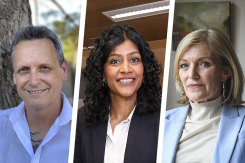 Samantha Ratnam (centre) who, with her crossbench colleagues Animal Justice Party MP Andy Meddick (left), and Reason Party leader Fiona Patten (right) have been involved in the negotiations for the bill.Credit:The Age

Greens MP Samantha Ratnam estimates her office has received 70,000 emails relating to the bill. And with them the threats: death threats, rape threats, threats against MPs personally and threats against their families and staff.

In 10 years in public life, she has never seen anything like it. “The level of threat has really escalated,” Ratnam says. “And that is something that really worries me very deeply.”

The government’s proposed pandemic laws would replace the state of emergency due to expire on December 15. The bill gives far-reaching powers to the health minister — powers which currently sit with Chief Health Officer Brett Sutton.

There is no doubt politicians are the target but often, electorate office staff experience the brunt of the abuse. It is they who read every email to decide whether it needs to be sent to security officials or Victoria Police. It is they who open the mail, including a recent letter containing a used condom with a note reading in part, “ENJOY SOME OF MY FRESH HERPES!!!“, sent to Animal Justice Party MP Andy Meddick.

One electorate officer, who asked not to be named because of the retribution she believed she would face, said the hours spent every day dealing with the sheer volume of abuse came at the cost of electorate work.

Federal members of Parliament have a layer of protection under Commonwealth law, which outlaws threats of violence against a public official. State MPs are not afforded the same protections.

In their absence, the Speaker’s office has been working with MPs and Victoria Police to assess and reduce the risks to Victorian politicians.

Spokespeople for both Victoria Police and the Speaker’s office, however, would not confirm the specifics of that advice – including whether some politicians had been advised to avoid crowds and community functions in the short term.

“Parliament’s security team work very closely with Victoria Police in assessing and responding to security risks to members, staff and the public who access both the parliamentary precinct and members’ electorate offices,” a spokesman for Speaker Colin Brooks said.

“Advice is regularly provided to members and staff on any changes in security settings and any actions that may need to be taken. However, in relation to these matters, we aren’t able to provide further details on the advice provided or current security settings.”

According to the Department of Parliamentary Services’ most-recent annual report, released last month, there was a 50 per cent increase in “security incidents” at Victorian electorate offices in 2020-21, with 197 incidents requiring investigation and response.

Of those, Parliament’s security services unit responded to 112 incidents at ministerial offices, a 124 per cent increase on last financial year.

He says a deep hatred has built up over the past 18 months, and the pandemic bill is a trigger that has inflamed tensions.

“On a psychological level, if you have no other options any more, no other ways to have your voice heard, you move onto threats and violence,” he said.

“For months and months, violence has been called for both online and offline. It’s just a question of time until someone [commits an act of violence]. The climate is created, the anger is fuelled, and then someone does it.”

Sometimes those issues include MPs being targeted at their homes. In one example, supporters of the protests held outside Parliament repeatedly posted what they claimed were the addresses of Labor members and at least one senior health official in a social media group with more than 13,000 subscribers.

Members of the anti-lockdown, anti-vaccine mandate group discussed having approached the home of Mr Andrews following debate among members about Australia’s gun laws.

The social media group, the name of which The Sunday Age is not printing, often published politicians’ addresses. Many of the addresses are incorrect or outdated, though some are accurate.

Earlier this month, Mr Meddick said ​​“abusive” protesters arrived at his house. Victoria Police said it did not comment on any aspect of security arrangements.

Stay across the most crucial developments related to the pandemic with the Coronavirus Update. Sign up to receive the weekly newsletter.