Chinese authorities have suspended timber exports from Victoria in the latest escalation of tensions between Australia and its biggest trading partner.

The fresh development comes after similar restrictions were placed on Australian exports of lobster, barley, wine, copper and coal destined for China. 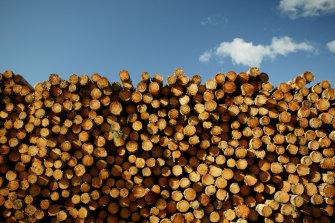 Chinese bans on timber from Queensland has now extended to Victoria. Credit:Andrew Quilty

Last week tonnes of live lobsters died on the tarmac at a Shanghai airport, sending shockwaves through the local fishing industry.

Chinese customs then issued a notice saying it had detected a bark beetle in Queensland logs heading to China.

"AFPA is working with the Department of Agriculture, Water and Environment to obtain more details from Chinese officials about these incidents and to address the issues identified," an association spokesman said.

Victoria had been largely unaffected by the widening Chinese trade restrictions, although some wine makers have experienced difficulties.

Timber from south-western Victoria and South Australia was due to be shipped to China from the Port of Portland.

The port’s chief executive, Greg Tremewen, said the suspension would have far-reaching consequences for the local economy.

He said the Port of Portland exported well over 1 million tonnes of logs each year with the vast majority going to China.

"I'm sure the value of logs that go through this port would be in the hundreds of millions of dollars," Mr Tremewen said.

Two ships were due to arrive next week to be loaded with logs, he said.

"Something would need to happen very quickly for those ships to be loaded. It's not good news."

Last week The Age reported estimates from the Commonwealth Bank, which found $27 billion of Australian exports to China were under threat if restrictions were imposed across all categories.

The tensions with China come after Australia called for an independent inquiry into the origin of COVID-19 earlier this year. The Australia government has also criticised China’s actions in Hong Kong, the South China Sea and Xinjiang.

Start the day with major stories, exclusive coverage and expert opinion from our leading business journalists delivered to your inbox. Sign up for the Herald‘s here and The Age‘s here.